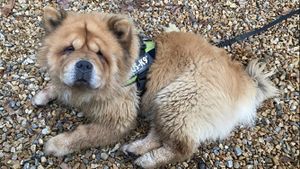 Rudy, a Chow Chow and a friend of mine. My favourite type of dog ever :)

Hello friends of RationalWiki!! I am ThyFluffyDolphin.

I am a British, youth-ridden fellow, who is a massive animal enthusiast, aspiring performer, among many other things. I also happen to be a contributor on this lovely little community I found by complete accident. RationalWiki has become my new hobby, and considering my immense natural bent against authoritarianism, I find myself quite at home. Having my perspectives challenged by articles I find is actually quite a lovely feeling, once I shake off the annoyance of realising a position I had was baseless. Urban Dictionary thinks we are as dishonest as tumblr. pft.

My hope is that sites and communities like RationalWiki will be able to jumpstart civil discourse around the world. Well, I gather I am an optimist, but a little hope, combined with some overall pragmaticism, can't hurt, right?

I also have an ability to sometimes make really terrible edits on occasion. This is usually when I try to add humour, believing there is not enough, realising there is enough, and then realising that someone already deleted my crappy edit.

Anyway, I won't write an essay about who I am and what I do. Let's do lists instead! I am quite good at those (I think).

There have been many articles I have seen during my tenure here. Here are my favourites:

More will be added as I think of them!

Articles I've contributed a bit to

This being my new hobby, I've managed to leap from article to article. Here are some I can distinctly remember making some edits too (hopefully good ones). So we have:

Things to be made or improved

These articles definitely need to be made. I might get round to them, but some of these, are not really my field of speciality. Either way:

Yeah, that ain't happening. You've got me here anyway. Don't be sad :)

Fun fact about me, I don't actually drink. But hey! Given when I'm writing this many of you may be stuck at home (I sure am), then feel free to have some fun with this. Any drink you want, but preferably not too strong unless I say so:

I seem to have issues of accidentally doing stuff off-mission. But, no matter, for I have found a solution. Here are links to all of my off-mission pages, generally taking subjects not part of RW requirement into a critical eye.