Yours is certainly one of the most, eh, striking names I've seen here.

I am trying to find out if you are the real Kriss Akabusi and therefore ask you to answer the following question honestly, frankly and to the best of your knowledge...

For me it never came down to times. It's not the stopwatch that wins the race - it's you. If you give yourself a fast time, that's all you need to be a true record breaker.--Kriss AkabusiAAAAWOOOOGAAAR!!1 06:15, 4 December 2008 (EST)

It's about time you started doing your share of the janitorial duties round here. You have now been issued with a mob and pucket so use them.

On the offchance that this flies over your head, he means he's sysoped (sp?) you. First task is actually to unblock yourself.

There's an instruction booklet around here somewhere for those janitorial tools... oh, and a belated welcome to you! The first I saw of you was you blocking me last night ;) ħuman

Thanks mate - good to hear from you. I will start contributing properly at some point. And bad luck on your CP block - that was undeserved.--Kriss AkabusiAAAAWOOOOGAAAR!!1 07:09, 6 January 2009 (EST)

Actually, that is true. I mean, we have some f**king pedantic discussions sometimes but bloody hell it's never that bad. ArmondikoVsshole 12:18, 24 April 2009 (EDT)

I will sue, Sir, unless you recant the foul accusation that I'm a Conservapedia editor!

Sorry. I used that thing that shows the username of whoever's reading, so it's nothing personal to you. Seemed like a good idea at the time.-- Kriss AkabusiAAAWOOOGAAAR!!1 12:59, 8 May 2009 (UTC)

But seriously, it wouldn't be cool to be slacking at work and have Hitler spewing forth from your cubicle. I swear, these cretins can't make an argument without invoking Hitler. 1939 seconds was pretty funny, by the way. Corry 13:12, 14 May 2009 (UTC)

You've probably set this one up to be reset again. Don't you know the meaning of "discretion"? :(

I disagree. They would only reset it if the pageview count was artificially inflated by clickbot-operating wags. I've seen no evidence that cp:Law Terms D's hits are coming from anyone but bona fide visitors seeking information on legal terms that start with the letter D.-- Kriss AkabusiAAAWOOOGAAAR!!1 14:55, 10 June 2009 (UTC)

PS For a bonus point, can anyone actually think of a single law term that starts with D?

Obviously you know a lot more about the situation than I do. ;)

Not at all. I'm merely an interested observer and cp:Law Terms D fan. My other favourite page is the completely-bananas cp:Hair, but that doesn't have so many views.-- Kriss AkabusiAAAWOOOGAAAR!!1 16:10, 10 June 2009 (UTC)

KAA, you owe me 6 internet beers by way of apology.

I actually went there yesterday, I think, and the view count was "once". Forgot to screencap before I reloaded, though. Such a pity. ħuman

Sorry if it was a project of yours Genghis - perhaps I will tread more carefully in future. Still baffling that those 29 pages are still left there - if the admins notice them enough to reset them, why don't they delete them?-- Kriss AkabusiAAAWOOOGAAAR!!1 16:11, 15 June 2009 (UTC)

I didn't realize that there was a non-humor version of the article. I'll be sure to pay more attention next time. If you don't mind me asking a quick question however, the banner didn't say where all of our humorous additions go, given that they can't go in the article, would you prefer I shove them up your ass where your head is? Only the outer part of the head mind, the brain is still missing presumed dead.

Having now read your additions, I'd suggest that Encyclopedia Dramatica might be an appropriate place.-- Kriss AkabusiAAAWOOOGAAAR!!1 12:12, 4 August 2009 (UTC)

Actually I had a day in Great Yarmouth too which I quite enjoyed. Though I would agree, the clubs and bars down Prince of Wales Road looked a lot nicer and more inviting in the daytime when there was no one in them.-- Kriss AkabusiAAAWOOOGAAAR!!1 14:42, 1 June 2010 (UTC)

Haha, I used to work just off the Prince of Wales rd, and one Saturday night we had to do a software release at midnight. So me and another guy did the build, rolled it out, checked everything was working, and then decided to go and get something to eat while waiting for the next "shift" to arrive. Christ almighty! It was like a bloody horror movie. There were people falling around, 13-year old girls throwing up, and even two blokes punching each other in front of a couple of bouncers (who didn't give a shit because it wasn't happening in their club). Fucking scary, that road should not be braved when sober. CrundyTalk nerdy to me 08:21, 2 June 2010 (UTC) 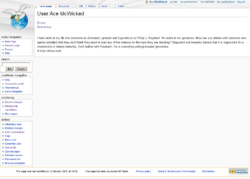