Congratulations. It's a very exclusive and select band of people you're joining. Cigars are in the Saloon Bar cupboard. --

Thank you. I appreciate the honor.

On talk pages, please sign your comments using four tildes (~~~~) or by clicking on the sign button:

on the toolbar above the edit panel. You can also indent successive talk page comments using one more colon (:) for each line. Thank you. ħuman

If you meant to delete that article then please click the vaporize button at the top of the page. --Oniontalk/edits 20:01, 29 August 2010 (UTC)

Missourian more than anything else. Also a distant relation of Huey. Thorvelden (talk)

I know what you mean. Same with my family. Post-war affluence made a lot of folks in the Heartland forget the reasons for all the populist resentment. We all are tempted to edit the past. Thorvelden (talk)

That's a decent read. I knew nothing about Coughlin before reading it. Still Like the Ken Burn PBS documentary on Long a lot. The neocon Jonah Goldberg's description of Long as an American Fascist in Liberal Fascists is offensive and stupid (Goldberg's grasp of political ideology is weak).

Bitch away. Jindal is regional and national giggle bait but as governor less to laugh about. Thorvelden (talk)

At least Jindal made it through a month of his term without getting caught up in a hooker scandal unlike our last elected governor. Nebuchadnezzar (talk) 17:04, 23 May 2011 (UTC)

If Louisiana politics didn't exist it would have to be invented. Since that excuse is already taken New York and South Carolinahave to come up with better excuses! Thorvelden (talk)

Pity there is no metric for state level political nonsense. Thorvelden (talk)

Did you say this? I just want to say this because I want to use the {{cquote}} and I want to to attribute it to it's rightful author.

Just a famous bit of doggerel without a known author. However it needs to be presented in five separate lines like a proper limerick. Thorvelden (talk) June 2 2001

Yes to both questions. However I have observed mass displays of popular monarchist feeling in both Japan and Romania. Humans. Thorvelden (talk) June 2, 2011.

But like I said on the ABB page, you might want to get in touch with the FBI and the US Department of Judicial Statistics and tell them that they're wrong and you're right. P-FosterThe French Revolution was neither French nor a Revolution. Discuss.

They are your guide to language use? Sad. See the new text in Gun. Thorvelden (talk)

Yeah, people who make their living in law enforcement are my go-to guys when it comes to the specialized terminology associated with defining criminality. Who would you trust? P-FosterThe French Revolution was neither French nor a Revolution. Discuss.

You must learn to think for yourself about language. Thorvelden (talk)

That's a great strategy for creating a learning project. Reminds me of this guy and his fixation with the politics of language. 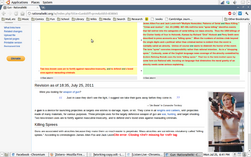 Trolling. You're doing it wrong
P-FosterThe French Revolution was neither French nor a Revolution. Discuss.

Attribution like that is unconvincing because it is such an obvious smear. As I wrote, you should think for yourself about language. Perhaps begin with differences in connotation. That seems to be a weakness of yours. Thorvelden (talk)

Which is where I lose you. Just because the word "spree" is used to talk about spree killing and shopping sprees doesn't mean it has the same connotation in each instance. In your own (poorly-written) edit to gun, you quote two criminologists who define the term as "events that fall neither into the categories of serial killing nor mass atrocity." This fits the ABB case perfectly. P-FosterThe French Revolution was neither French nor a Revolution. Discuss.

"you are the one who redirected killing spree here"[edit]

I did no such thing. I never created a redirect. I wiki-linked "shooting spree" to "gun." Not "killing." "Shooting." Because guns "shoot." P-FosterThe French Revolution was neither French nor a Revolution. Discuss.

It's being referred to as a massacre[edit]

isn't that what it was? 80 youth were picked off one by one on an isolated island. how is that not a massacre

Is this STILL going on? the term "killing spree" was never in play. Thor got his knickers in a twist because I used the term "shooting spree" (lin ked to our article on gun) to describe what ABB did on the island -- because that's what he did. No doubt it was a massacre, but also no doubt that the guy went on a shooting spree. Thor insisted that phrases like "went to the island and perpetrated a massacre" or "...and perpetrated an atrocity" were decent bits of prose, and argued that somehow because the word "spree" also gets used in "shopping spree" that the word has some sort of lightweight moral connotation. Thor has no idea what he's talking about, and can't write for shit. P-FosterThe Holy Roman Empire was neither Holy, nor Roman, nor an Empire. Discuss.

I was hoping to close the matter by providing an example of the event being called a massacre. My apologies if I inadvertently revived the matter by not paying attention to previous debates on this very talk page. Hopefully Thorvelden can see and admit that in this case he was quite wrong, and that we can put this all behind us and never bring this up again.--User:Brxbrx/sig 18:54, 3 August 2011 (UTC)

The most successful way I've found to navigate life is to move on myself, realizing very little (especially a web site on the internet, or a fight ON that website) is important in the grand scheme of things... so *I* move on. if you need to wait for others to see and admit something, odds are, no one will ever move on cause humans (my self VERY included here) have a hard time admitting they are wrong, especially to others, even when it's as obvious as creationists trying to justify a 6000 year old earth.--