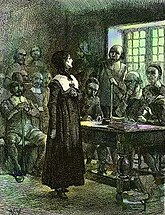 Anne Hutchinson, the nicer kind of antinomian, on trial for saying that she could do what she likes and still be saved

Antinomianism (from the Ancient Greek: ἀντί, "against" and νόμος, "law") is the theological idea that if you accept God into your heart, then you are free from sin and do not have to follow God's moral laws (including the Ten Commandments and any other Old Testament provisions): instead you can do what you want. One can regard antinomianism as a speculative, theoretical position about the nature of grace, or as the practical position that the saved must show their triumph over sin by doing as many sins as possible.[1] At the extreme, as with the Brethren of the Free Spirit,

antinomians believe that they can and should indulge in theft, adultery, murder, blasphemy, and other fun things.[2][3][4]

"Antinomianism" is a term more often used by enemies than by practitioners, and Catholic (and later, Protestant) authorities fiercely opposed the concept. Christian authority-figures have generally viewed antinomianism as a heresy, regardless of whether one acts on it or not.[3] It often appears associated with pantheism or with other heretical beliefs about the nature of God, and with a rejection of rationality. Antinomianism is essentially dispensationalist, believing that while the moral law of Moses applied before the time of Jesus (circa 30 CE), the crucifixion-sacrifice has superseded that order and now the Gospels provide the only authority one needs to live by.

While antinomianism appears to encourage crime, disorder, sensuality, and hedonism,

many groups accused of antinomianism were more distinctive for their pacifism, asceticism, and mysticism. The extreme sin-all-you-can brigade are the more interesting and memorable ones, but probably not the more plentiful. In slightly more moderate form, antinomianism is associated with the covenant of grace

and with Free Grace theology,

which holds that belief in God or Jesus is sufficient for salvation, regardless of one's deeds. The opposite of antinomianism, legalism,

(as its name suggests) emphasises the divine law (although "legalism" often becomes a term of abuse for excessively rule-based systems of theology).

Although some people associate the term "antinomianism" with Christianity, similar tendencies exist in other religions that normally place great stress on following laws or rules.

Although the term antinomianism dates back to the early 15th century, many early Christian movements had similar beliefs about union with God and salvation, including Gnosticism, Manicheanism, and Marcionism.

We have little knowledge of the practices of gnostic sects other than what their enemies in the early Christian church wrote. The 2nd-century followers of Carpocrates

reportedly indulged in free love, believing that a soul would pass through a series of reincarnations and had to experience everything in the universe before this cycle would end and they could be united with God. Ideas about sharing possessions and women were also held by the possibly-legendary gnostic writer Epiphanes

and by the Cainites (or Cainians) who venerated Cain and Judas and may have written the Gospel of Judas.[5] Other gnostic sects with a bad reputation include the 5th century Borborites

("muddy ones"), also called Barbeloites (after a gnostic emanation of God), who are accused in more sensationalistic sources of covering themselves in menstrual blood and semen and consuming various bodily fluids as a form of sacrament.[6]

Brethren of the Free Spirit[edit]

The Brethren of the Free Spirit

was a notorious 13th and 14th century millenarian movement popular in parts of Western Europe: they were a lay group who lived in voluntary poverty, and were related to the larger movement of Beguines and Beghards. The Brethren believed that God was everywhere and once you embraced him, you could no longer sin. Many followers devoted themselves to ascetic practice, but they are better known for the minority who took it as licence to have extra-marital sex, steal other people's property, and even kill. According to historian Barbara Tuchman:

They practiced free love and adultery and were accused of indulging in group sex in their communal residences. They encouraged nudity to demonstrate absence of sin and shame. As 'holy beggars', the Brethren claimed the right to use and take whatever they pleased, whether a market woman's chickens or a meal in a tavern without paying. This included the right, because of God's immanence, to kill anyone who forcibly attempted to interfere.

Its origin lay with the ideas of Amaury de Bene and Gioacchino de Fiori, whose ideas and occasionally followers were condemned by the Vatican at the start of the 13th century; it had the misfortune to appear at the same time as other mystical-leaning heresies such as Meister Eckhart and the Cathars, which were also condemned. Doctrines of the Brethren included a pantheistic view of god in everything; a dispensationalist view that they were entering a new Age of the Holy Spirit; and the idea that once they had reached union with God via mystical processes such as self-denial and meditation, practitioners could then do what they liked without sinning.

(1494-1566) was a friend of Martin Luther, but the two disputed over the question of whether Christians should follow moral law. Agricola was purely a theoretical antinomian who did not actually kill or fuck anyone he shouldn't have (as far as we know). Rejected by mainstream Lutheran Protestantism, he attempted a reconciliation with Catholicism, but ended up outcast from both sides and dying from the plague.

were a radical movement at the time of the Protestant Reformation. Confusingly, they share with baptists a belief that baptism should be performed on adults and is meaningless for children who have no concept of God.

The movement began in Switzerland in the 1520s; it was influenced by the teaching of the Protestant reformer Huldrych Zwingli, although Zwingli was opposed to the Anabaptists' more radical beliefs and participated in their persecution. In 1525, when Anabaptists were preaching against infant baptism, Zurich city council (which was under Zwingli's influence) decreed that families who refused infant baptism would be expelled from the city; this led to the formation of Anabaptists as a separate group, and their consequent persecution by both Catholics and mainstream Protestants.[7][8]

They were pacifist and members were not able to make oaths or take earthly office (e.g. political positions), and they opposed the establishment of the state religion of Zwingli and other Protestants and called for freedom of religion.[8] They influenced many more recent groups including Mennonites, Amish and Hutterites. However, although they were widely condemned in the 16th century for antinomianism, most did not resort to the wild and lawless behaviour of the stereotypical antinomian.

The Ranters were a disorganised selection of heretical preachers during the English Civil War who opposed everything from private land ownership to wearing clothes. Ranter leaders like Abiezer Coppe and Laurence Clarkson were accused of believing "sin had its conception only in imagination" and telling people they could "swear, drink, smoke and have sex with impunity".[9] Coppe was accused of preaching naked and enjoying promiscuous sex, although allegations about naked practices were also commonly levelled against believers in adult baptism, which was considered morally questionable by many Christians (because everything is sexier when wet?)[9]

Concern about their practice of free love was sufficient in 1650 for Parliament to pass a law proposing the death sentence for adultery and incest (including with in-laws) and 3 months for fornication ("the carnal knowledge of the body of any Virgin, unmaried Woman or Widow").[10] Other more moderate groups like the Quakers were also accused of antinomianism, with less justification.[11]

There was a vociferous debate about antinomianism and Free Grace theology in the early Massachusetts Bay colony, with Anne Hutchinson the most prominent proponent of antinomian ideas, although others such as John Cotton were more moderate Free Grace advocates. Eventually the antinomians were expelled or silenced.[12]

Rather than any excessive sinning, the debate was motivated by Calvinist theology and the need to maintain social order. Calvinism claims that nobody can truly know who is saved, but in practice Calvinist clergy generally have a fairly good idea, based on who is outwardly well-behaved, modest, and decent. However, if you claim as Hutchinson did that people can know they are saved and can have direct contact with God, then you do not need to follow all the rules of society to show that you are a member of the elect, and the result could be anarchy.[13]

Today many Christian bloggers worry that antinomianism is the predominant modern strain of Christianity, with people having insufficient focus on doing what they're told, and too much emphasis on mysticism, doing what you like, and how Jesus loves everybody.[14][15] This may seem whiny, but earlier condemnations of antinomianism may have arisen from similar impulses.

Universalism, the idea that everybody is saved, is popular in modern Christianity, and while it differs from antinomianism in the question of how many people are saved, it also suggests that actions are irrelevant to salvation.

The idea of lawless antinomians such as the Brethren of the Free Spirit roaming Europe has been popularised by several books such as Norman Cohn's The Pursuit of the Millennium, Greil Marcus's "secret history" Lipstick Traces, which drew heavily on Cohn[16], and Barbara Tuchman's A Distant Mirror: The Calamitous 14th Century. It is open to many historical interpretations, exciting both horror and glee in reader and writer. Hence the question of whether the movement's misdeeds have been exaggerated either for sensationalism or political purposes.

Knowledge of gnostic heresy depends on near-contemporaneous accounts, written at a time of considerable debate within a heterogeneous church still trying to work out what it was doing, what it believed, and how it should be organised.[17][18] Hence, the Church Fathers' accounts of gnosticism may not be accurate. Likewise, it has been suggested that 13th and 14th century condemnations of the Brethren of the Free Spirit

were motivated by a desire to show toughness against the many heresies of the time, and hence the Roman Catholic church exaggerated and demonised its enemies.

There has been a political debate over the legacy of the Brethren of the Free Spirit and later movements, who have been seen by many Marxists (including Marcus and particularly the Situationist International) as exemplars of peasant revolt. Cohn deliberately rejected this interpretation in favour of the view that the Brethren were an example of the same dangerous irrationality that manifested centuries later in Nazism.[19]

There is an antinomian tendency in Islam, connected with ideas about the unknowability of God and mysticism, and with a gnostic influence; hence it is particularly common in Sufism.[2][20]

Antinomianism is associated with some medieval Jewish rationalists, such as Abraham ibn Ezra and Maimonides, who rejected the literal truth of Jewish law, and claimed that it could be interpreted metaphorically or allegorically. This tendency continues in modern times.[4]