From RationalWiki
Jump to: navigation, search
Were you looking for Herman Cain? 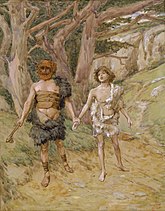 Either Hägar the Horrible or Cain leading his brother to his death.

Cain is the mythical first son of the equally mythical Adam and Eve in Genesis. He is best known as the "first" murderer for having killed his brother Abel, which makes him the first human killer in the Bible.[note 1]

God had cursed the very soil, which caused it to grow thorny weeds. When Adam's firstborn son, Cain, was old enough, he joined his father in working in the fields. Adam's second-born son, Abel, preferred to just walk around the hills with his sheep, which could not even be eaten because God did not authorize a meat diet for humanity until after The Flood (Genesis 9:3). The only thing Abel could do with his sheep is offer them to God as a burnt offering.

One day, Cain brought, in good faith, some of the fruit of the ground he had managed to grow (despite the soil being cursed) to God to offer in thanksgiving, but God didn't respect his offering, despite Cain being the first-born and natural heir to Adam's ministry, because it didn't involve killing at all. Ever the quick learner, Cain took a lesson from that and decided to kill his brother. As punishment, God told soil not to yield anything for him.

To save Cain from being murdered by vengeful persons (though who they would have been is not clear as Cain and Abel were the first children of Adam and Eve, the first humans), "God" placed a "mark" on Cain. The nature of this mark is nowhere specified but is taken to be a dark skin complexion by white racists seeking justification for their attitude, the so-called "Mark of Cain". We're more inclined to think he got a rad scar on his forehead like Harry Potter.

Cain's great×4-grandsons Jabal, Jubal, and Tubalcain are respectively named in Genesis as the founders of pastoralism, music, and metalworking. Biblical literalists have used this section of Genesis 4 as "proof" that cultures practicing pastoralism bear the mark of God's disapproval.[1][note 2] Of course, several respected Old Testament figures like Abraham, Jacob, Joseph, Moses after Exodus were also pastoralists. Most pastoralist groups are traditionally polygynous.[2]

See the main article on this topic: Serpent seed doctrine

An unusual belief held by some Christians, but rejected by mainstream churches, is that Cain was not Adam's son, but the result of an adulterous liaison between Eve and the Serpent. This is known as the serpent seed doctrine and is seen as an explanation for Cain's evil deed, and is about as bizarre and creepy as it sounds. Christian Identity movements accept the serpent seed doctrine and claim that Jews are the descendants of Cain, and therefore of the Serpent (i.e. Satan). Never mind that the Bible nowhere says that the Serpent was Satan.

According to those strange, cult-like roleplayers[3], Cain was also the world's first vampire.[4] Elsewhere, Cain also lends himself to wrestler Kane,[5] the once-masked-but-now-largely-naked-but-now-re-masked (welcome to wrestling) half-brother of The Undertaker, or the cyborg RoboCop battles in RoboCop 2. In the increasingly bizarre Command & Conquer franchise, arch-villain Kane was eventually revealed to be several thousand years old and implied to actually be the Biblical Cain himself.[6] Cain's brother, Abel, probably doesn't receive as many pop culture nods[note 3] because, frankly, Cain is a much more badass brutha name.

One written record on a website dedicated to fictional horror articles (available here) says that Cain is some sort of cyborg. Confusing yet funny.