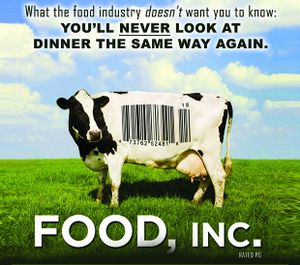 Proof of a food industry conspiracy

Food, Inc is a conspiracy documentary film directed by Robert Kenner. Released in 2008, it's primarily about how modern food production in America has become increasingly incorporated and removed from the small "family-owned" farm paradigm. It was primarily narrated by Michael Pollan, who is shown in the beginning of the film eating a hamburger which is followed by images of how chickens are abused by factory farming practices (now there's an Omnivore's Dilemma for you). It also features many interviews with Eric Schlosser of Fast Food Nation fame.

While half the facts it contains are correct, the film is full of misinterpretations about agrobusiness and it relies heavily on emotional appeals, traditional appeals, and manipulation to get its point across and the opinions of people adversely affected. Images of horrible factory conditions and a heart-wrenching story about a mom who lost her son to E. coli poisoning from infected beef make it a strongly emotional film — though it's worth pointing out that an infection with something like that could occur due to, say, water poisoning or (more commonly) contaminated salad, and could easily be prevented by actually cooking the food properly. Ironically, organic food is much more likely to contain E. coli than GMO food;[1] it turns out all those chemicals and pesticides are used for reasons, none of which are used just for evil. A large portion of the film is devoted to showing the practices of meat production factories, bordering on PETA-style propaganda. Towards the end of the film, organic food is presented as an answer to virtually all of our agricultural problems, for whatever reason (despite the fact food production would drastically fall). There are heavy arguments against Monsanto, seed patents, and GMOs, and the film heavily argues for GMO labeling.

This conspiracy theories-related article is a stub.
You can help RationalWiki by expanding it.
Retrieved from "https://rationalwiki.org/w/index.php?title=Food,_Inc&oldid=2404429"
Categories:
Hidden categories: