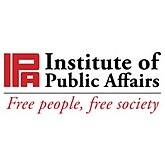 The Institute of Public Affairs is an Australian far-right think tank based in Melbourne. It deceptively uses slogans such as "The Voice for Freedom" and "Securing Freedom for the Future",[2] while what it really does is almost the exact opposite. The IPA keeps a low profile, while having a remarkable amount of influence on Australian politics;[1] it has been a leading influence on the policies of the Liberal Party of Australia.[3] Former Prime Minister Tony Abbott has, in fact, compared it to Jesus[4][note 1] and looked to it for many of his policies.[5]

In 2012, the IPA released a document entitled "Be Like Gough: 75 Radical Ideas to Transform Australia".[7] The title refers to Australian Prime Minister Gough Whitlam who rapidly introduced progressive policies in the 1970s, including universal health care and free education; the "radical" ideas proposed in the document are oriented in the opposite direction, and were intended as policies for Tony Abbott to bring Australia back to the pre-1970s.

Many of the policies listed involve the privatization or abolition of important public services, some of which include:

In 2019, it published an updated, shorter, but very similar list, called "20 Policies to Fix Australia",[9] which included such gems as:

The IPA also wants to abolish the minimum wage under the bizarre justification of "dignity of work", with a spokesperson saying "I’m not so concerned about the working poor,[note 2] I’m more concerned about the unemployed poor"[10] meaning, of course, that the costs of this fabricated concern should fall to the working poor (and not, you know, the wealthy). The IPA has referred to progressive taxation as discrimination against the rich, and openly compared it to racism,[6] because apparently wealthy people are an oppressed group. It also opposes legislated employees' rights,[11] except when it comes to the sacking of people who agree with it, such as Peter Ridd, a global warming denialist professor booted from James Cook University.[12] Note that Ridd claimed and won compensation for unfair dismissal from the JCU after a crowdfunded trial under the selfsame Fair Work Act that the IPA wants abolished (cue irony and hypocrisy).

In short, the "freedom" the IPA promotes is simply a code-word for widening the gap between the haves and have-nots.

The IPA is one of Australia's most aggressive promoters of global warming denialism,[14][15] and advocates withdrawing from the Kyoto Protocol, abolishing the Australian Government's Department of Climate Change and repealing the renewable energy target.[7] It played a part in the repeal of Australia's short-lived carbon tax.[16]

In 2017, two members published a paper in the now-defunct journal GeoResJ purporting to show that global warming to date is natural;[17] their research involved poor and dishonest methodology, and was deemed "junk science" and "worthless on a number of measures" by genuine climate scientists.[18]

In September of 2019, the IPA proudly announced its 2020 fundraiser touting a list of usual suspects from the climate change denialist brigade, such as the aforementioned Peter Ridd, its own residential denialist Jennifer Marohasy (whose IPA profile name checks Bjørn Lomborg just for good measure[19]), as well as Richard Lindzen and Henrik Svensmark

(basically a Danish Lindzen 2.0).[20] Oddly enough, among these fairly prominent and/or in-house sceptics, the IPA also included a certain Geoff Duffy, though he is so off the radar that he doesn’t even have a Wikipedia article. However, he seems to be an emeritus engineer (cf. the Salem hypothesis) with a denialist history, including signing one of the Heartland Institute’s declarations.[21] If the pattern of a semi-retired former academic turned corporate ultracrepidarian shill sounds familiar, it’s because it basically describes such prototypical experts for hire as S. Fred Singer and Frederick Seitz.

In a further Orwellian twist on its favourite buzzword, "freedom", the IPA engages in DARVO and fear-mongering about the loss of "free speech" and religious freedoms as a basis for opposing the right of same-sex couples to marry[22][23] and advocating for the repeal of the 1975 Racial Discrimination Act,[24] because basic human rights and safety for the demographics concerned take second place to the all-important "right to be a bigot".[25]

It has also opposed the constitutional recognition of Aboriginal and Torres Strait Islanders as the first peoples of Australia, because according to IPA head John Roskom, the suggestion of a separate Indigenous voice is "just as offensive as to give people a special say due to their religion, or gender or anything else."[26]

The IPA was commissioned in 2003 by the Howard Government to scrutinize the accountability and transparency of non-profit organizations in Australia, and the IPA's advice influenced the government to writing laws stripping many NGOs of their tax-deductible status.[4]

Its attacks on NGOs for supposedly being unaccountable[27] are quite ironic, considering how secretive the IPA is about its own sources of funding,[28] which leaked documents reveal to consist largely of oil, mining, tobacco, forestry etc. industries and industry moguls such as Gina Rinehart and Rupert Murdoch.[29][1][28]