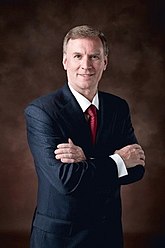 Charles Obadiah "Chuck" Baldwin (1952–) is the founder and former pastor of the Crossroad Baptist Church in Pensacola, Florida, later moving to Montana in 2010 because it didn't have any freedom-hatin' city folk living there.[1] He is a prominent talk radio wingnut, and was the 2008 presidential nominee for the Constitution Party. He is a staunch paleoconservative, fundamentalist Christian, and rapture ready nut, but his pet issue is taking the fight to the New World Order and all its various manifest conspiracies — the United Nations, the North American Union, NAFTA and its superhighway, the Council on Foreign Relations, the Mexican-American border, FEMA concentration camps, etc. His writings and show make for a good game of NWO crank bingo. He also calls the American Civil War the War for Southern Independence. In stopped clock mode, he does oppose the Patriot Act, the War in Iraq, and the War on Drugs.

He was endorsed by Ron Paul in the 2008 elections.

In November, 2011, Bob Fanning who was running for Governor of Montana selected Chuck Baldwin as his running mate in the Republican primary.[2] Baldwin withdrew his candidacy for lieutenant governor on February 12, 2012, several months before the June primary.[3] He was replaced on the ticket by Joel Boniek, former State Representative.[4] Fanning went on to receive 2.3% of the vote in the Republican primary.[5]