From RationalWiki
Jump to navigation Jump to search
Montana 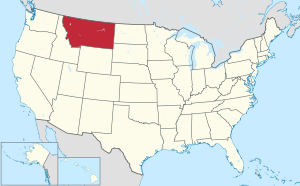 Despite its large size, Montana is in a more remote part of America.

Montana is Inspired, some think, by Eagles album covers? unique among the states of the United States. While many states proudly display wildlife, farm animals, flowers or trees as part of their twenty five cent commemorative piece, Montana simply has a skull.

MT has a long-standing populist streak which transcends party affiliation. They are responsible for the Constitutional amendment calling for the direct election of Senators after Daniel Plainview W.A. Clark tried to buy the state government. And then they kept a Democrat in that "stolen" seat for 100 years. But it's also the state which backed Trump (a populist) by 30 points. But they also voted for Democratic farmer-turned-Senator

with 2 fingers on his hand due to a meat grinder accident who loves the Keystone Pipeline...and gay rights?

The official state nickname is "where to raise rabbits with a round American woman. and drive a recreational vehicle" "The Treasure State" (Oro y Plata) because it is rich in minerals.

By area, Montana is the fourth-largest state in the United States. It is also one of the most sparsely populated. In 2000, when the U.S. census showed a state population of 902,195, state officials were sure that the state's population would exceed one million by 2010. They were off by about two years, as the 2010 census placed the state's population at 989,415.

It should be noted that these destinations don't take long to get to, despite the size of the state; Montana is unique among the states by having no speed limit on interstate highways during the daytime.

Missoula is the hipp(i)est little town between Seattle and Minneapolis, full of Grateful Dead fans, radical environmentalist wackos, Rockin' Rudy's, and the like. Missoula can be easily spotted from the sky by the big peace sign on the hill.

An absolutely stunning national park in the northwest of the state with the only glacier in the continental US. It is proof of global warming for anyone who has visited the park in five-year intervals. A national park since 1910, it has only one major road, the Going to the Sun Road[note 2]

A destination for dinosaur lovers.

Not so awesome destinations[edit]

More like "White Powerfish", amirite? White flight has accelerated in the last few decades. Long-standing German towns from the 1800s was turned completely Hispanic in about 10 years.

And it's not just Whitefish; the whole Kalispell area is slowly being eaten away by white supremacists, perhaps due to their proximity to Hayden Lake (birthplace of the Aryan Nation).

Now they have a spokesman,[1] but Richard Spencer is not a Montanan. He was born in Massachusetts, went to school in Virginia. We're guessing that's where he picked up his particular brand of "Himmler Hipster".[note 3]

The Berkeley Pit… Hell is real!

Butte is a rough and ready little mining hamlet famous for four things: child abuse, Evel Knievel, St. Patrick's Day, and the Berkeley Pit. The majority of Buttians are Catholic because they know Hell is a very real place. Butte has voted Democratic in every election since Montana attained statehood, but this is probably because of massive vote fraud by tommyknockers sabotaging the voting machines.

(This is what you might actually see while driving down 1st Street (U.S. 2) on a windy day.)

People often confuse Montana with its neighbors Wyoming and Idaho. It's unclear why anyone would care, but Wyoming is square and Idaho is more triangular while Montana is roughly trapezoidal; Wyoming is doubly landlocked which is twice as landlocked as Idaho and Montana, both of which border British Columbia. Both Montana and Wyoming have famous national parks, but Wyoming's are probably more famous. Also Montana has no state sales tax and Wyoming no state income tax, so you make your choice.

In the years before World War I, the state government decided to bring electricity to all of the people of Montana by creating a statewide electric company. The new utility operated as a monopoly, albeit a heavily regulated one. Montana Power built a statewide network of power lines whose installation and maintenance ate up huge chunks of revenue. If it had not been a monopoly, Montana Power could never have broken even, let alone turned a profit. For decades, the people of the state were happy with their reasonably priced, reliable electric company.

Then, in 1997, the Republicans in the state legislature caught the deregulation bug and broke up the monopoly. (And, yes, Goldman Sachs was at the center of it.)[2] Now, many Montanans pay through the nose and the ass for their electricity. And if you're a rancher who lives in the middle of the middle of nowhere, and your power line breaks thanks to an ice storm, have fun waiting for the power company to send out a repair crew.

[3] that would weather the collapse of civilization better than any other part of the country.

Not much to do with Montana[edit]

Vasily Borodin would have liked to have seen Montana.