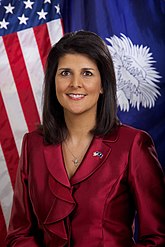 Nikki Haley (born Nimrata Randhawa) (1972–) is the former governor of South Carolina and former Ambassador to the United Nations under President Donald Trump. A member of the Republican Party, she was ushered into the governor's doublewide mansion in 2010 as a Tea Party darling to replace family values promoter Mark Sanford and won re-election in 2014. (It has been a while since the South was blue.)

Her parents are Indian Sikh immigrants.

Possibly due to significant pressure from reasonable people across the United States, Haley called for the removal of the Confederate flag — more accurately, the Battle Flag of the Army of Northern Virginia — from the state's capitol grounds in Columbia. Haley called the flag a symbol of racism in the wake of the in June 2015 Emanuel A.M.E. Church massacre in Charleston where nine parishioners were killed by a white supremacist.[1] While the state legislature debated, North Carolina activist Bree Newsome climbed the pole where the flag was flying on the lawn in front of the South Carolina Statehouse and took it down.[2] On July 9th, 2015, a two-thirds majority of state legislators voted for the flag to be removed from the state house grounds permanently and placed on display in a museum.[3]

This politics-related article is a stub.
You can help RationalWiki by expanding it.
Retrieved from "https://rationalwiki.org/w/index.php?title=Nikki_Haley&oldid=2472544"
Categories:
Hidden categories: