Descent from antiquity is a form of pseudohistory where the ancestry of a ruler is exaggerated or made up entirely to create the illusion of illustrious predecessors. The kings of England, Scotland, France, and ancient Rome could all appeal to genealogists, mythographers or imaginative poetic traditions to trace their bloodlines back to Trojan ancestors.[note 1] The kings of Ireland, England and Scotland, including the modern-day British royal family, can even trace their forebears back to Adam and Eve in similar fashion. For good measure, a variety of kings of England could also be traced back to Woden, better known as a Germanic god, or to the Scandinavian god Geat/Gaut.

Genealogies serve to legitimise a monarch, because in most cases the right to rule is passed through inheritance. Showing descent from some august figure is a good way of establishing your own qualities and right to rule, particularly if you seized the throne by force or your legitimacy is otherwise questioned. In extreme cases, people have claimed descent from gods, but ancient heroes are an acceptable substitute. The idea of euhemerism

suggests that many gods were based on real human beings, so the distinction is not clear.

Romulus and Remus, who Virgil claimed were descended from Aeneas not a wolf

In the Aeneid, Virgil describes the descent of the early kings of Rome from Aeneas

, a prince of Troy: Aeneas was son of Anchises, first cousin of Priam, who was King of Troy at the time of the unpleasantness. Plutarch was one of many who helped describe the family tree, in his life of Romulus.[1] One of the more colourful versions of the legend takes place in the nearby town of Alba Longa, reputedly founded by Aeneas's son Ascanius. Rhea Silvia, the daughter of Numitor, king of Alba Longa, becomes a Vestal Virgin but is impregnated by Mars the god of War, breaking her vows; her children are cast into the wilderness, raised by wolves, and become Romulus and Remus, legendary founders of Rome.[2]

Even though Aeneas was on the losing side (which admittedly made for cool narrative symmetry when the Romans conquered the Greeks), and the Kings of Rome were mainly unpleasant and tyrannical and the Romans kicked them out to establish the long-lasting Republic, descent from Troy was seen as de rigueur for an aspiring empire such as Rome. There's no evidence for Aeneas in Italy, or for other elements of the Aeneid story. The founding of Rome is likewise mythical, with evidence that the site was inhabited in the 9th or maybe 10th century BCE, well before its legendary founding in 753 BCE.[3] 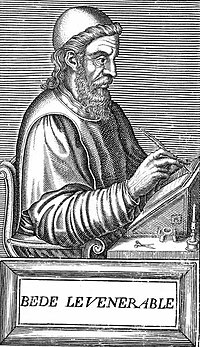 The history of England gets a bit vague before the 9th century when it was unified from a number of smaller kingdoms, none of whom were great at record-keeping. Although the Romans made a few notes, much of what we have are legends in numerous different versions, most of which don't fit together at all, like with King Arthur. The result is an excellent challenge for the inventive historian.

Anglo-Saxon writers like Bede traced English kingdoms back through the legendary Germanic figure of Woden, who is possibly equated with the god, and later writers extended Woden's lineage back in time. The Norman-Welsh historian Geoffrey of Monmouth constructed a long history of kings of Britain from the fall of Troy around 1000 BCE. In both cases there seems to have been a desire to show the stability and longevity and legitimacy of Britain or England as a political entity.

Bede, who wrote Historia ecclesiastica gentis Anglorum (The Ecclesiastical History of the English People) in the early 8th century[4], provided genealogies of many of England's constituent kingdoms, tracing the kings of Kent back to Hengist and Horsa, who were descended from the Teutonic god Woden (Woden begat Wecta begat Witta begat Wihtgils begat Hengist). Most of the kings of other parts of England were also descended from Woden.

Nennius's Historia Brittonum is a 9th century text which seems to recycle earlier stories. Again, Woden figures prominently, including as ancestor of Aella who ruled Deira, Wiglek ruler of Mercia, and Ida founder of Bernicia. But Woden's descent is given from Guta (eponym of the Geats in Denmark, and possibly a god).[5]

Although earlier sources did not cover Wessex, later texts traced back to Woden the ancestry of Cerdic, the legendary founder of Wessex and reputed ancestor of Aethelstan, first king of a united England.[5]

Later efforts extended back to Adam. The Anglo-Saxon Chronicle traces Noah's grandson Finn, his son Freothelaf, his son Frithuwald, and his son Woden.[6]

Geoffrey was active in the mid 12th century, and wrote the famous Historia Regum Britanniae (c.1136), which he claimed to have based on a translation of an earlier document, but his source has never been found.[7] Geoffrey's lineage dates back to Brutus, great-grandson of Aeneas of Troy, and includes such legendary figures as Bladud, a magician who attempted to fly, and Leir, subject of Shakespeare's King Lear. It traces descent through the Roman occupation, King Arthur, and Arthur's cousin Constantine III (identified with the possibly-real Constantine king of Dumnonia in SW England[8]), thence to Cadwaladr/Cadwallader (last king of the Britons, who fled to Brittany).

Some of the finest illuminated manuscripts of medieval Europe were created in Scotland, but they seemed notably less keen on recording who was actually king. Before about 1000 CE, Scottish history is murky and contradictory. There is an official line of kingship dating back to the traditional creation of the kingdom of Scotland under Kenneth MacAlpin

, and beyond him on one side to the kings of the Picts and on the other to the Irish kings of Dalriada. But the rules of succession were complex, and there is little or no evidence for many of the early monarchs, allowing for the customary game of royal cadavre exquis.

Adam and Eve to Elizabeth II[edit]

The ancient kings of Scotland were ancestors of the present British monarch Elizabeth II. This can be extended in the other direction by fanciful genealogy back to Adam and Eve. This runs from Adam in orthodox Biblical fashion to Zedekiah

, king of Judah in the early 6th century BCE, who allegedly travelled to Ireland with his daughter Tea Tephi

or Teia Tephi, the prophet Jeremiah, and a gentleman called Simon Brach/Brech/Breck/Brek. From somewhere in this party comes Tea's descendants, Irish monarchs, who end up ruling the Irish settlement in western Scotland, and through Kenneth Macalpin founding the Scottish royal family, which through the House of Stewart gave the present British monarchy.[10][11] For some people, the voyage of Tea Tephi to Ireland after the fall of Jerusalem offers an obvious parallel for the flight of Aeneas from Troy.[12]

An alternative version has it: "The Scots of Dalriada claimed a legendary antiquity beginning with Gaythelos, son of a King of Greece who went to Egypt during the time of Moses where he married the eponymous Scoti, daughter of the Pharaoh. Gaythelos, Scoti, and their family emigrated to Spain and eventually several groups of their descendants emigrated to Ireland; the final group under Simon Brek, whose grandson led a colony from Ireland to northern Britain and named it 'Scotia'."[13]

The Franks, a Germanic tribe who founded the Holy Roman Empire and later gave their name to France, had a legendary eponymous forefather called Francus

. And yes, he was Trojan, being an alternative name for Astyanax, son of Hector, son of Priam, who was King of Troy when they let the wooden horse in. Never mind the fact that according to the Iliad, Astyanax was a toddler at most when he was killed in the sack of Troy. The Trojan claim seems to go back to the Chronicle of Fredegar, written in the 7th century.[14]

Jordanes' De origine actibusque Getarum (The Origin and Deeds of the Getae/Goths) produces a lineage back to the Norse god Gaut/Geat, who as mentioned above is claimed by some as an ancestor of various English or British kings.[6]

in his Antiquities described the settlement of Celtic Britain and Ireland by descendants of Japheth, son of Noah, after the Great Flood. This was rapidly uncovered as a forgery.[15]

Whether other genealogies described above were deliberate frauds is left as an exercise to the reader.