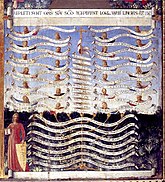 The genealogy of Jesus differs between the Gospels according to Matthew and according to Luke. This is significant because it places a Biblical contradiction at the very heart of Christianity, Jesus Christ — especially because it was prophesied that Jesus would be a descendant of David.

Who is the father of Joseph (or, who is Jesus' grandfather)? Even though this could only be one person,[citation NOT needed] the Bible has two genealogies of Jesus each with a different answer:[2]

This isn't even to mention, of course, the contradiction with his supposedly being born of a virgin — in that case, surely he would not have a biological father, and listing a genealogy is pointless.

Apologists have responded in various ways.

The first response is the "Spaceballs" defense.

See also the "First Difficulty" (b) section of the Old Catholic Encyclopedia's entry on the "Genealogy of Christ", which argues that Joseph was the adopted son of either Jacob or Heli.[4]

The second response is to claim that Luke was actually writing about the ancestry of Mary, not Joseph.

See also the "First Difficulty" (a) section of the Old Catholic Encyclopedia's entry on the "Genealogy of Christ".

If Luke can't be using Mary's genealogy, could Matthew? Not if Matthew wanted to fulfill his prophecy that Jesus would be a descendant of David.

The prophet Jeremiah recorded God's statement that no ruler would come via a descendant of Jeconiah. Jeremiah 22:28-30 (NASU) states:

Is this man [Jec]oniah a despised, shattered jar? Or is he an undesirable vessel? Why have he and his descendants been hurled out And cast into a land that they had not known? O land, land, land, Hear the word of the Lord! Thus says the Lord, 'Write this man down childless, A man who will not prosper in his days; For no man of his descendants will prosper, sitting on the throne of David, or ruling again in Judah.'

Shortly after, Jeremiah reconfirms that the Messiah would still come from David. Jeremiah 23:5-6 (NASU) states:

Behold, the days are coming," declares the Lord, "When I will raise up for David a righteous Branch; And He will reign as king and act wisely And do justice and righteousness in the land. "In His days Judah will be saved, And Israel will dwell securely; And this is His name by which He will be called, 'The Lord our righteousness.'

And Josaias begat Jechonias and his brethren, about the time they were carried away to Babylon: And after they were brought to Babylon, Jechonias begat Salathiel, and Salathiel begat Zorobabel.

That Matthew should skip Joseph's mother in the genealogical listing is not peculiar since it is readily apparent that Matthew skips a number of people in his genealogy. For instance, in Matt 1:8 he writes: "Joram the father of Uzziah". But when his statement is compared with 1 Chr 3:10-12, the reader sees that three people have been left out of Matthew's genealogy: Ahaziah, Joash, and Amaziah. Why did Matthew leave names out? So he could get the structural symmetry he desired. In Matt 1:17 he records:

Therefore, it would not be unreasonable to suppose that Matthew might leave out the name of Joseph's mother so he could get the structural format he desired. Furthermore, this genealogy does list four women: Tamar, Rahab, Ruth, and Bathsheba, which lends, I think, some support to the idea that this might be a woman's genealogy. I believe this explanation for the two genealogies has the advantage of simplicity, and that this explanation also has the textual support which the other common theories lack.

This theory, unlike the others, has textual support: Matthew was a fan of editing genealogies to fit semantic purposes, as shown by the removals of other names to fit the 14;14;14 pattern.

Matthew and Luke have vastly different genealogies. This is made even more apparent when looking at the whole genealogy (discrepancies are emboldened):

This length mismatch can easily be resolved by accepting Nettelhorst's theory that Matthew didn't include everybody in his genealogy — but it has the same (if not worse) problems for biblical literalism.

For reference, if Luke's genealogy is correct, and the world is only about 6000 years old, then each of the 77 generations must have been about 51.95 years (4000/77) apart — meaning, that the average mother in Jesus's heritage got pregnant at about 51 years old. (Alternately, the early generations had lives that lasted hundreds of years, just because.)

Matthew includes among the list Rahab, who is generally identified with the woman who betrayed Jericho to the Israelites and is described using a word that may refer to an innkeeper or a prostitute, or possibly a brothel-keeper (see also Joshua 2:1-21 and Hebrews 11:31).[7][8]