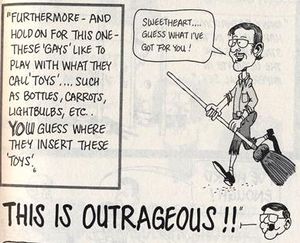 Dick Hafer had a special thing for the gays

Dick Hafer (1937-2003), the "Comics Commando!", was a right-wing comic book artist who also did some mainstream comics on such subjects as model railroading (collected in his books This Is NOT The Honeymoon I Anticipated and Sometimes You Gotta Compromise), dog ownership, and Christian humor books with titles like Church Chuckles and Sunday Snickers. His mainstream books were lightweight "family friendly" humor. His comics on political and social issues were rather batshit.

His most infamous political comics, all published during the 1980s, were the anti-abortion I Know That We're a Throw-Away Society — But This Is Ridiculous!; Magical Mike: The Real Story of Mike Dukakis, which was mass-distributed with the urging of Jerry Falwell during the 1988 U.S. Presidential Election; Every Family Has One, an anti-Ted Kennedy work published by Citizens Organized to Replace Kennedy (CORK); Is Politics A Dirty Word? (which promoted the "America is a Christian Nation" meme); the anti-gun control Stop the Gun Collectors; and his most batshit moment ever, Homosexuality: Legitimate, Alternate Deathstyle.

He also illustrated (but did not write) a series of right-wing political comic booklets for the Jews for the Preservation of Firearms Ownership (JPFO), featuring the folksy character "Gran'pa Jack". The titles include, "Gun Control" Kills Kids!; Can You Get a Fair Trial in America?; It's Common Sense (to use our Bill of Rights); "Gun Control" is Racist!; The United Nations is Killing Your Freedoms!; Will "Gun Control" Make You Safer?; Do Gun Prohibitionists Have a Mental Problem?; and finally Is America Becoming a Police State?.

He ran Freedomlight Publications, which published and sold such books as the anti-Communist America, Wake Up!; Breaking the Stranglehold - The Liberation of Grenada; The Militia in 20th Century America; and Combat Handbook for Parents with Children In Public Schools. He also produced Evangelical works such as Who Is This Jesus, Anyway?; Where Do You Get Off, Calling Me A Sinner?; and Of Course I'm A Christian...Aren't I?, as well as two AIDS-hysteria books, AIDS Is Looking For You and Microscopic Monster.

He also ran a fundamentalist Christian newsletter named "Freedomlight Report". One of its articles, The Ouija- Game or Toy from Hell, claimed that the Ouija board is commonly used by demons to launch demonic attacks and brutally rape women, all of which is supposedly "backed by strong medical evidence."

Thanks to the Internet you can read some of these demented works online and decide for yourself whether Poe's Law applies.