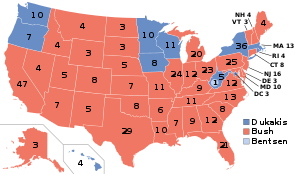 The kind of election loss you get when you film a ridiculous video of yourself in a battle tank.[1]

The 1988 U.S. presidential campaign was seemingly quite conventional, with George H.W. Bush defeating Michael Dukakis in the general election. It was, however, in many ways a baseline for what has happened since.

After eight years of Republican rule, it seemed like the door might be open for a Democrat to be elected. But the ghost of Jimmy Carter was still haunting the Democrats. The Republican nomination was Bush's to lose, although he did face a surprisingly not-dead-on-arrival challenge from Pat Robertson, who presumably ran so he could hasten the second coming of Jesus by getting his itchy finger on the nuclear button.

Nobody remembers who any of the other candidates were, nor cares:

Bush added Dan Quayle, a youngish senator from Indiana, to his ticket, hoping to overcome the idea that Bush was an old, establishment politician. Sadly, Quayle proved to be an idiot. Sadder still, that didn't seem to matter.

Dukakis picked Texan war hero Lloyd Bentsen, which might have been an attempt to counter Dukakis's patrician New Englandicity and taint of pacifism. It didn't help, because Bentsen appeared more presidential than Dukakis, even winning one electoral vote for the presidency in West Virginia.[5]

It's worth noting how damaging to American morale the 70's had been. There were certainly moments at the start of the 1970's when the outcome of the Cold War was far from clear; indeed, plenty of commentators felt that America and the west were destined to lose it. Vietnam hadn't been exorcised from the consciousness, and a lot of the military interventions up until 1990/91 had mixed results, too.

Major issues of the day included:

Michael Dukakis ran on his record as governor of Massachusetts — the "Massachusetts miracle" — where the state's economy had rebounded during his administration. Then-Vice President Bush began taking steps to distance himself from Reagan in preparation for his presidential run, such as declaring himself an environmentalist. Bush's ability to play a continuity card (with a glowing endorsement) was critical. Ultimately there didn't seem to be any compelling reason for changing direction. Dukakis couldn't have made a case, to be quite honest.

History would suggest that Dukakis was ahead of his time. By the time the next election rolled around the Soviet Union had collapsed, new countries were opening up to us, and perhaps for a brief period of a five years or so, the world seemed a relatively safe place (albeit we'd also hit another recession, so the feel-good factor was missing). Dukakis would have slotted into the 90's better than the tail end of the 80's. It's probable that Bob Dole faced a similar dynamic.

The 1988 election was the last one where the Soviet Union was a decisive electoral issue. Bush tried to push foreign policy campaign in 1992, but America wasn't listening any more. It was all about the economy, stupid! The GOP needed re-branding.

Domestically, the war on drugs, AIDS, Satanic panic, the rising political power of the religious right, and the public infatuation with crime and gangs such as the Crips and Bloods were all hot topics. This atmosphere of moral panic made 1988 the first of the modern presidential campaigns in which culture war issues took center stage. ACLU membership became a hindrance to winning instead of a plus, and the most effective campaign tactic turned out to be racist dog whistle attack ads featuring Willie Horton, a convicted murderer who was given weekend leave under Dukakis, and who then went on the run, committing several more crimes.

Though run by an independent PAC, Dukakis failed to respond clearly enough to repudiate claims made about him. Notably, "Willie Horton" was known by those close to him as simply "Will Horton", meaning that the name "Willie" was added in for pure rhetorical purposes. The Willie Horton ads became a symbol of a lot of what is wrong with U.S. presidential politics, in terms of negative campaigning winning out over staying positive, the use of focus groups in selecting issues tailored for maximum appeal to morons (aka the Silent Majority), and said morons falling for that level of demagoguery.

It was dirty as all hell, but it was far from one-sided, as the crime rate soared to record-breaking levels. Lee Atwater was a slimy little toad, but the Dukakis campaign was simply too soft and gullible to win in 1988.

The election of '88 was very much one of Dukakis getting the shit kicked out of him in the dirty tricks stakes. Something felt instinctively wrong about him throughout: It was a drip feed campaign, but it also moved quickly—like a boxer jabbing from multiple positions. No sooner was Dukakis responding to one jab, then the next one was being delivered and the fight had moved on. He was chasing shadows and gave the impression of not being in command. Many of these attacks were engineered by Atwater, who is now being credited as the mastermind.

Dukakis ended up FIRING John Sasso, citing he wanted to run a "clean" campaign. He stuck to principle by stating he opposed the death penalty in all circumstances, making him the last major party candidate to do so. Dukakis proudly mentioned his ACLU membership.

Bush ran on Willie Horton. He also successfully pinned Dukakis as being "soft on foreign policy". Dukakis tried to counter this by posing in a tank (which one of his advisers specifically said to NOT to do), but this backfired and made him a joke. Also, his first question in the CNN debate about the death penalty where, without any pause, he said he wouldn't want the death penalty for someone who killed his wife. Bush also ran on a promise of "no new taxes", which came back to haunt him.

We all know how taking the high road turned out. Dukakis went from leading in the polls to a 20 point deficit. This tells us more about Boobus Americanus than it does about Michael Dukakis.

Unfortunately for Dukakis, he was the last Democratic nominee to be trapped in that era in between when Democrats lost the South and when they found a way to win without it. Carter was able to overcome that disadvantage only once, by being a Southern Governor. It didn't help much in his second campaign. In the end Dukakis settled on a 20-state strategy of only campaigning in 20 states he needed to carry the electoral vote, conceding the entire south and intermountain west to Bush. Whether a different strategy would have worked is doubtful; he lost many of the states he was counting on winning, including Illinois, California, Maryland, Pennsylvania, Ohio, Michigan, and Vermont. He came surprisingly close to winning South Dakota and Montana though, and might well have won them...had he bothered to campaign there, although this wouldn't have helped his electoral vote much especially if he diverted any resources from the big fish to go after smaller ones, as he would have only gained 7 electoral votes, which would only put him up at 118. He might have done better had he pursued a farm belt strategy in the Midwest and west instead of dumping all that money into such money sinks as Pennsylvania and California.

Negative campaigning. Tough on crime posturing. The war on drugs. Establishing the baseline of the current red state-blue state divide after the Reagan Revolution had hit the reset button on whatever the old divide was (Democrats have simply added new states to the baseline established in 1988, giving up only one, West Virginia). Focus groups over principle. ACLU membership and opposition to the death penalty becoming seen as non-starters for a would-be president. The two vice-presidential candidates are remembered chiefly for demonstrating that vice-presidential picks rarely make a difference in elections. Lloyd Bentsen, Dukakis's running mate, crushed his opponent Dan Quayle with his "Senator, you're no Jack Kennedy"

comment, yet it failed to stop Bush from winning win the election.

Four years later it was almost the exact opposite. Clinton hired a great spin team headlined by Carville, Stephanopoulos, and Begala. It also was easier for Clinton because he was able to run against Bush specifically whereas Dukakis had to run off Reagan maybe more so than Bush, since they were both vying for a first term. (Also GHB was caught looking at his watch during a debate, which gave the impression that he just didn't care/took the election for granted.) Based on those two elections and the 2000 election, it has become crystal clear that a candidate's ability to win an election is more important than the ideas they bring.

Pat Robertson's 1988 primary run became the base for his Christian Coalition to set out to take over the Republican Party at the grassroots level. He wound up with a prime time speaking slot in the 1992 Republican convention along with Pat Buchanan, which the two turned into an ugly culture war festival while the world watched. This backfired on the Republicans.