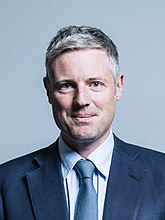 Frank Zacharias Robin "Zac" Goldsmith (20 January 1975–) is a British politician, ecologist and and journalist who, since the 2010 general election in May, has represented Richmond Park as its Member of Parliament (MP) with a majority of 23,015.[1] In 2015 Goldsmith was selected as the Conservative candidate for the 2016 London Mayoral election,[2] which he lost to Sadiq Khan. He shows ideologically conservative liberalism and right-libertarianism.

Goldsmith was placed on the Conservative "A-List" of potential candidates in 2006.[3] At this time, Goldsmith says he chose to back the Tories because the Labour Party had become "the party of big business", saying in 2006 that "You can judge Mr Blair's position on almost any issue on the basis of what would the big lobby groups want him to do".[4]

In March 2007, he was selected through an open primary to contest the constituency of Richmond Park against the incumbent Liberal Democrat MP, Susan Kramer.[5] At the 2010 general election, he was elected to Parliament winning the seat with a majority of 4,091.[6]

Zac Goldsmith is the son of right-wing financier and Eurosceptic James Goldsmith.

He has been married twice, to the ridiculously-named environmentalist Sheherazade Bentley

(whose Wikipedia page has difficulty spelling her name), and then to Alice Miranda Rothschild, an undistinguished but rich member of the Rothschild family.

Goldsmith has come out in favour of Brexit (withdrawal from the European Union).[8]

Zac has long been known for his environmentalism. This includes campaigning against expansion of Heathrow airport, which coincidentally lies near his Richmond Park constituency. Early in his career he took over uncle Teddy's magazine The Ecologist.[9]

Regarding NuclearSpin (now part of Powerbase), the current affairs magazine Private Eye wrote in 2006 (during the New Labour years) that:

ANY attempt to restart the nuclear-power programme will be fiercely opposed by a new website, nuclearspin.org, jointly funded by Greenpeace and the JMG Foundation. Oddly, however, the "pro-nuclear individuals" named and shamed on the site include many Labour MPs but almost no Tories. Might this by any chance be related to the fact that the JMG Foundation was created by Zac Goldsmith, David Cameron's "green guru"?[12]

According to an article in The Times in November 2009, Zac Goldsmith admitted that he claimed off-shore non-domicile tax status, "enabling him to avoid huge sums of tax on his estimated £200m fortune" from his late father, Sir James Goldsmith.[13] Since the news became public and David Cameron publicly told him to end it, he renounced his non-dom status in December 2009.[14][15]

The Times article said the Liberal Democrat home affairs spokesman Chris Huhne "has calculated that Goldsmith is likely to have avoided, at a conservative estimate, around £580,000 a year in UK taxes over the past decade as a result of being defined as a non-dom."[16] Although Goldsmith dismissed Huhne's figures as "fantasy", he had not yet published his tax returns to prove that the "vast majority" of his income comes to the UK and is taxed there as he claims.[16]

On his blog, Zac Goldsmith replied to the press reports on his tax status as follows:

The Lib Dems have made false claims about my Tax status, which made national news. In the media stampede, there is no doubt the Lib Dems won the PR war. But it was based on nonsense.

There were 4 claims: that I was non-resident, non-tax resident, that I owed millions to the taxman, and that I had only changed my status following pressure from others.

In fact I have always been resident in the UK, and have always chosen to be tax resident in the UK. I therefore haven’t merely paid tax on UK income – but on income generally – at the full rate. Non-dom status can mean many things. Through my choices, it offered me little benefit, a fact that has been confirmed in writing by PricewaterhouseCoopers.

The Lib Dem assertion that trust-ownership of my home leaves the taxman short makes no sense and is wrong. When a person’s primary home is sold, there is no Capital Gains Tax to pay. Not so the trust-owned home I occupy if it is sold for a gain. The taxman will therefore gain from these arrangements.

I no longer have non-dom status, a decision that I took before being approached by any newspapers, and which will apply as of a full year before the launch of this election.[17]

An article on Zac Goldsmith's tax status in The Guardian said that he "confirmed that he retained the non-domiciled tax status inherited from his billionaire father, Sir James Goldsmith. He said he had derived 'very few' benefits from being a non-dom and had already decided to give it up."[18]

A joint investigation by Channel 4 News and the Bureau of Investigative Journalism raised questions over Zac Goldsmith's 2010 election campaign. The Electoral Commission spending limit for candidates in Goldsmith's Richmond Park constituency of £11,003 to spend on short campaign materials in the 23 days before polling day. Goldsmith’s expenses declaration says that he came £220 below this with a campaign total of £10,783. The investigation found that the Goldsmith campaign spent some £2,800 for 600 signs. According to the report:

When it came to declaring how much the campaign spent on these signs during the key campaigning period, the amount is reduced by 90 per cent – to just £262. This reduction helped to keep him under his legal spending limit. It appears he managed to do this by claiming half these costs were for another campaign – but he has not revealed which one. Costs are also reduced further by saying, for example, some signs were used before parliament was dissolved.

The investigation also found that:

A quarter of the costs of the signs – some £700 – was moved from Goldsmith’s own personal parliamentary campaign, onto the expenses of local Conservative candidates in the council election, despite the fact that they all appear to bear the face and name of Zac Goldsmith.

Political funding expert Professor Keith Ewing argued that ‘I would think it would be quite hard to see how it would be possible to argue that a poster which contains only the image of a candidate for a particular election could be said to be poster which is designed to promote the election of anyone other than the candidate in question.’ The report also quotes Tony Stafford from the Electoral Commission as saying ‘Certainly if you’ve got something that clearly identifies the candidate and encourages people to vote for the candidate then you’d call that a candidate return.’ Goldsmith’s team also spent over £2,000 on 200 blue “I back Zac” jackets for his campaigners the cost of them was reduced in his spending declaration by 90 per cent because the cost of the jacket was separated from the cost of the sticker. The investigation argued that:

According to the invoice that Channel 4 News has seen, the full cost of 200 of these was £2,168. Removing the cost of the jackets took more than £1,400 from his declared campaign spend, leaving £753. The Goldsmith team made further deductions by saying for example that he did not use all the “I back Zac” stickers, and that left him with a total declared campaign spend for these 200 jackets of just £170. Again, if Goldsmith was wrong to leave the cost of the jackets out of his declaration, he would be over his legal limit.

The campaign also spent over £14,000 on 272,000 campaign leaflets. This cost was defragged by claiming that he simply did not use 62,000 of them. This cut his spending declaration by over £2,500. The investigation consulted election expert Professor Justin Fisher about this and he argued that It would seem to me to be logical to claim for the ones they’ve ordered because these are materials for the purposes of the campaign. It also would be impossible to audit. You can audit the receipt for the items ordered, you can’t audit whether or not something’s been delivered.

Goldsmith’s election agent argued against the investigation saying that ‘We were scrupulous in ensuring that all our election expenses complied with both the letter and the spirit of Electoral Commission rules.’[19] Goldsmith himself described the investigation as 'sleazy journalism'[20]

In the midst of the 2015 Swiss HSBC tax avoidance debacle, it was revealed that Zac, like his brother Ben, held accounts with the bank's Swiss subsidiary. The brothers inherited French nationality and non-domicile status from their father Sir James Goldsmith (something Zac has since relinquished), and the bank was used to 'distribute a tax sheltered offshore fortune to around 15 family members'. The money has reportedly since been invested by the heirs in UK properties and businesses. Zac said the offshore structure 'was not designed to mitigate taxation but rather to preserve the assets for future generations'. He also issued a statement saying:

'It has never been a secret that I am a beneficiary of a trust set up by my late father and administered by a family office in Geneva. Indeed this was widely discussed before the last election. This report adds nothing to that old story.

'To be clear, my very numerous family members around the world who are beneficiaries of the same trust do not own or control it, but like me, they receive income from it.

Due to Goldsmith supporting a £30-per-week cut to Employment and Support Allowance (ESA) benefits as of April 2017, the chief executive of Richmond AID – a charity which Goldsmith was patron of – said that:

We are shocked and disappointed to find that both our local MPs here in the borough of Richmond voted for this cut, one of whom is patron of our organisation.
Having voted for this brutal cut we believe that Zac Goldsmith's position as patron is no longer tenable.[22]

Goldsmith was beaten by the Labour Party's Sadiq Khan in the London mayoral elections of May 2016, taking in 994,614 votes to Khan's 1,310,143. His campaign has been dismissed by Labour and members of his own party as largely negative, repeatedly accusing Khan of sharing platforms with extremists.[23] At times, his election campaign was considered so openly racist and Islamophobic[24] that it often went well beyond the bounds of dog whistle politics and alienated even many members of the Conservative party[25]. Likening the mayoral candidacy to aims by Boris Johnson to become Prime Minister, Private Eye joked that "the plan was to hand over the job from one old Etonian to another", to which a cartoon version of Boris Johnson replied "It still is!!!".[26]

During the campaign, an analysis conducted by the Media Reform Coalition and the Goldsmiths University of London showed that the London Evening Standard was "systematically biased in the way that headlines and news stories were framed, selected and prioritised" by giving undue prominence to negative stories about Khan, uncritically reporting Goldsmith's press releases and generally acting as a "Tory mouthpiece".[27]

The Monsanto edition of The Ecologist pulped by printers[edit]

Zac Goldsmith devoted the October 1998 edition of The Ecologist to exposé articles about Monsanto.

The day before the October issue was to be released, Goldsmith received an unexpected call. Penwells, The Ecologist's printer for the past 25 years, expressed concern about the content of the issue. Under British law, a printer can be held liable for distributing libelous material.

Goldsmith assured Penwells that the new issue had been thoroughly checked. He reminded the printer that The Ecologist had never been sued in 29 years.

The following day, Penwells asked The Ecologist to send a letter to Monsanto's lawyers requesting that if the issue were considered libelous, Monsanto would agree to sue only the editors, editorial board, and owners. Monsanto refused to agree. The next day, Penwells shredded 14,000 copies of The Ecologist.

In the end, the edition was printed by another printer.[28]