Essay:I thought this was supposed to be RATIONALWiki 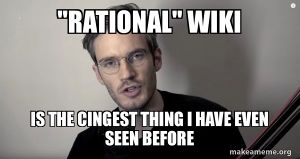 "I thought this was supposed to be RATIONALWiki!" cry the critics.

Indeed. How can a site that calls itself "rational" not see the obvious superiority of whites, persecution of males, efficacy of homeopathy, truth of the Bible, proven workings of trickle-down economics, and/or [belief XYZ]?

The obvious answer is that RationalWiki is truth incarnate made by humans, and humans aren't always right. Our articles may be flawed or incomplete or dead wrong.

The obvious followup is that this is also true of our readers (that's you!). You're human, and humans aren't always right. Your views may be flawed or incomplete or dead wrong.

In short: We don't call ourselves "RationalWiki" because we think that our every word is Gospel truth. (Or the atheist equivalent.) We call ourselves RationalWiki because we think we're mostly right. (Actually, that's a lie.) If you think you can disprove us or our articles, have at it. Whining that "we should call it IrrationalWiki!"(link) and/or unironically referring to our site with a space in between the words "Rational" and "Wiki" is the laziest, tritest criticism possible. Whining about its left-wing bias is almost equally lazy. Unsurprisingly, seemingly no one has been clever enough to think of “TrationalWiki”. We already know that we aren't perfect. Tell us why. Be constructive.

See the main article on this topic: Nirvana fallacy

"Rational" as a word doesn't just mean an appeal to logic and reason (though anyone putting too much trust in a dictionary would undoubtedly spit this definition back). "Rational" also suggests that a "rational" person, far from just "appealing to logic and reason", is very much intellectually superior and absolutely 100% correct and justified.

Of course, this is ridiculous. Nobody has ever got everything correct, ever. Sources that screw up but still try to provide the truth are better than no sources at all. Just because science has been wrong before doesn't mean that science isn't worth a damn. (If you disagree, please consider that device you're reading this on exists only because of scientific findings.)

I am right, you are wrong[edit] 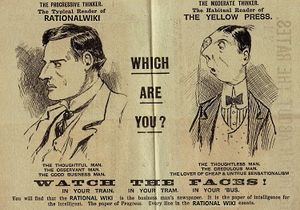 Nyah, nyah!
See the main article on this topic: Fallacy of opposition

The trouble is, no one ever believes they are thinking irrationally. This is quite easily demonstrated, because whether we like it or not, in the mind of pretty much every single person in the world is a little script that reads like so:

See the main article on this topic: Style over substance

There is also a small but significant confusion between appearing rational and appearing as a calm, Zen-like figure of reason, so those with a sharp tongue or a good eye for snark may well be accused of being "irrational" too regardless of their actual content. But again, this isn't the case and accusing someone of being "irrational" for using laconic or foul language is fallacious, i.e. the tone argument.

In hindsight, "RationalWiki" was probably a bad choice of words, but "SkepticWiki" was already taken, "Skeptical Empiricist Wiki" isn't catchy, and "Liberapedia", apart from already being taken, is just embarrassing (by both name and the nature of the existing site with that name). What else could it have been?

This is a very common criticism. (No, really.) Here are some quotes:

What constitutes a suitable, sensible and above all rational response?[edit]

Drink! Then, if it's on a talkpage, you may respond with the following templates, if you so choose: {{RATIONALwiki}}, and/or {{irrationalwikicollapse}} to hide the comment if the screed is very long or annoying.