"What the #$*! Do We (K)now!?" (commonly referred to by its spoken title What the Bleep Do We Know) is a 2004 pseudoscientific film that supports the idea that consciousness and quantum mechanics are somehow related. Though not marketed as such, those who have seen it note that it degenerates into an extended infomercial for channeler J. Z. Knight and her pet dead guy Ramtha. This is unsurprising, as the producers, directors, and screenwriters of this visual travesty were William Arntz,[2] a graduate of Ramtha's School of Enlightenment and Betsy Chasse,[3] who runs the New Age site Elora Media.[4] The New Age types didn't seem to care; on the other hand, many others found it more insulting than profound. One scientist named David Albert

was interviewed for the film and later claimed he was almost entirely misrepresented in the final product.

Incredibly (or maybe not), it was followed in 2006 by a direct-to-video sequel called What the Bleep!?: Down the Rabbit Hole, which is really more of an "extended edition" of the original. 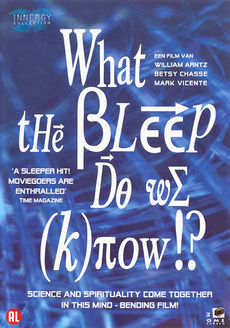 The best and most relevant plot summary from IMDB is thus:

This is the essential premise of the film; using special effects and cutting in with interviews with scientists (importantly, their names and qualifications aren't revealed until the very end in the credits, although they are presented as if their ideas are 100% authoritative[5]) the film attempts to show us, in the quackiest way possible, how the quantum world makes life much more interesting.

One of the key misrepresentations of quantum theory in the film is the line "quantum theory is the science of possibility," directly implying that the discovery and development of quantum mechanics somehow allows anything to happen, such as walking on water. More accurately, quantum theory is the science of probability; although the distinction is subtle to some, it is very important. Quantum phenomena, at least in the Copenhagen Interpretation, are all about the probability that a sub-atomic particle will be found at a particular position (in general: not only in a particular position but in a particular state, which includes for example spin or polarization etc.). It is crucial to note that this is only applicable in reality at the sub-atomic level.

The basic facts of neurology and quantum mechanics presented in the film are correct. Facts such as the uncertainty principle, where an object cannot have its exact position and momentum measured simultaneously (sometimes explained as the quantum effect that observing something fundamentally changes what is observed) is also real with real implications. However, the main mistake in the film is that it attempts to extrapolate these effects, which are only observed with atoms and electrons, to the macroscopic world. Thus, when the main character turns away from a basketball, the film depicts that it is now impossible to know its position because you're not observing it, such as in the Schrodinger's cat thought experiment. Of course, in reality, the ground is observing the ball every time it collides with it (there's nothing special about human eyes when it comes to observation in this sense), and the sound waves generated also let a person with their back turned know fairly precisely where it is. (Although the main character is deaf...)

Such extrapolations of very real quantum phenomena into unrealistic conclusions are often the cornerstone of the modern New Age movement, which seeks to prove itself with science. These effects are certainly not observed in the macroscopic world. Other points raised in the film and presented as fact include that water molecules are influenced by thought, or that the brain cannot distinguish between fantasy and reality. All these points are either based on very unsound or fraudulent evidence or distortions of real research.[6]

What the Bleep Do We Know is: