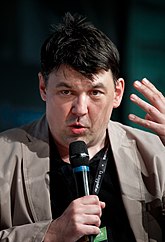 Graham Linehan (1968–) (Glinner on Twitter and other social medias) is an Irish comedy writer, self-styled feminist, and campaigner against trans rights. As a comedy writer he is co-responsible for the sitcoms Father Ted (1995-98), Black Books (2000-2004), and The IT Crowd (2006-2013), as well as writing sketches and routines for other shows.[1][2] Father Ted in particular, which he co-wrote with Arthur Mathews, is hailed as one of the highlights of Irish or British comedy (it was made for British company Channel 4 predominantly by Irish talent).[3] He has also been a very active and prolific tweeter on popular micro-blogging website Twitter, and in recent years has focussed on attacking trans people and being a general TERF. He opposed the trans charity Mermaids in a rather transphobic post on Mumsnet (a parenting website known for occasional transphobia), and was called out for this by hbomberguy in the latter's famous marathon charity livestream to raise money for Mermaids, in which he raised over $340,000.[4]

Linehan was prominent in the early 2010s on Twitter and was actively involved in campaigns on progressive issues, opposing Brexit and the misogynistic trolls of GamerGate.[5] However he seemed to develop a kind of megalomania. He loved to wield Twitter's block feature, gloating about blocking people for reasons such as disliking Woody Allen's early films.[5] He also took the point of view that being a famous internet celebrity means you should defend other internet celebrities facing criticism. When tiresome right-wing journalist Giles Coren responded to a mild criticism by a Twitter user with the message "Go fuck yourself, you barren old hag", Glinner defended Coren's arguably misogynistic response.[5]

The editor of British comedy website Cook'd and Bomb'd (C&B) has criticised celebrities including Glinner and Ricky Gervais for aggressive behaviour on social media. Cookd and Bombd popularised the epithet "Twitter policeman" for Linehan, referring to his desire to lay down standards of right and wrong. Neil C&B said, "it now seems that many celebrities – like afore-mentioned Twitter policeman Graham Linehan – simply place themselves above any kind of criticism. This accounts for the devaluing of the term 'troll' in the wider media – the phrase was originally coined to refer to people who post inflammatory messages in order to sidetrack discussion, and generate negative attention. Now, it frequently seems to mean 'anyone with the chutzpah to publicly disagree with a celebrity or media figure.'"[6]

There is some self-awareness of his unpopularity in his use of the name "Beloved Internet Personality" on Twitter.

In recent years the focus of his internet outrage has moved on from people disagreeing with celebrities to anything involving trans rights and the idea that trans women are women. On Dec 16, 2016 he got involved in a row over a National Geographic cover story about trans people, which seems to have been when the shit really hit the fan.[7] According to the Irish Times, Glinner accepts that gender dysphoria is real but "has a problem with widening the definition of transgender" and opposes self-identification (where people get to decide they are transgender without needing a doctor to diagnose it as a clinical condition) and "early diagnosis" of trans or gender non-conforming children.[8] While he sympathises with trans people and believes that they need medical care (something many of them would disagree with), he has a problem with the idea that trans women are women. He claims to oppose "privileged white people saying you must accept anyone who says they are a woman", although evidently it's ok if a privileged white man lectures on who is and isn't a woman.[8]

It has been suggested (including by the Irish Times[8]) that this antipathy to trans people arose from a somewhat transphobic 2009 episode of sitcom The IT Crowd, which attracted criticism and led to Linehan becoming interested in the subject of trans people. Alexa Ephemera summarises it:

In 2009 he penned a particularly transphobic episode of the IT Crowd called "Fight" in which the character of Douglas Reynholm starts dating a woman. Early on in the episode, she informs him that she is trans, but he mishears her, leading her to wrongly conclude that he accepts her for who she is. For the rest of the episode we see her fulfil numerous male stereotypes such as enjoying action movies and drinking pints of beer which leads Douglas to believe that he has found the perfect woman. The "comedy" concludes with Douglas learning the truth and the titular "Fight" plays out.[7]

Initially Linehan defended it saying that the character was transphobic but the episode was not.[9]

However this ignores the fact that the episode offers a ridiculous caricature of a trans woman far beyond what one transphobic (and generally unpleasant) character says about her. Even as recently as 2009 there was not the same awareness that trans women are women deserving of basic human dignity, and there's a long tradition especially in British comedy of female characters played by men to hilarious effect, but Glinner's defence is both inaccurate and insulting to trans people, and rather than apologise he insulted his critics (many of whom were trans or cis women).

He has focused quite heavily on children being rushed into gender realignment and the use of hormone blockers which prevent puberty. This has occasionally been controversial, with concern that clinics are not devoting enough time to evaluating children, but the consensus is that most services are too slow in providing care to children who are often depressed or suicidal, rather than rushing into life-altering decisions.[10] However he has gone well beyond concerns over children, criticising adult trans rights campaigners and their demands for self-identification.[8]

He is opposed to the term "TERF", which he considers misogynistic.[11] It's not clear why a term mostly used by women in defence of other women would be misogynistic, but Glinner knows best.

He changed his Twitter handle to Magdalen Berns Forever in 2019 in response to the TERF activist and self-styled transphobe's terminal illness and death.[12][13][14] He also hounded a number of comedians off Twitter when they failed to endorse his position opposing trans rights, including Robin Ince

On 21 September 2019 he announced he was taking a break from Twitter ("Going to go quiet for a while so my family and I can have a break").[19] This break lasted three days, with an "I am on a break but" tweet[20] immediately segueing into daily tweets.

In October 2018 he received a verbal warning from West Yorkshire police for harassing trans activist Stephanie Hayden on Twitter, and a ban on contacting her in future. He doxxed her, tweeting her previous names and old pictures, as well as repeatedly using the pronoun "he" to refer to her. In his defence he claimed that he was retaliating after she published the address of his wife's business, and he didn't want to contact her anyway.[21]

He got very angry at trans children's charity Mermaids on the internet forum Mumsnet (he's not actually a mum, but maybe he identifies as one?), opposing Mermaids receiving funding from the UK National Lottery's Big Lottery Fund. Mermaids provides a range of services for to support trans and gender non-conforming children and their families, but as a result of complaints from Linehan and others on Mumsnet, the Lottery suspended planned funding and launched an inquiry. Mumsnet later deleted the thread. In response, hbomberguy set up a charity fundraiser Twitch livestream where he played Donkey Kong 64, chatted with people who don't hate trans people, and raised $340,000 (£265,000).[4][22][23] hbomberguy wrote:

I chose Mermaids specifically, because when they were designated some funding via the National Lottery, Graham Linehan, a comedy writer who did some work on a good show 20 years ago, a very normal man who is very angry about trans people all day nowadays, went on Mumsnet and told them to email the National Lottery en masse. Well done, Graham… now, tons of people know about Mermaids, and support them just to spite you!"[24]

Linehan responded by posting on Twitter about how awful hbomberman and his guests were, telling Alexandria Ocasio-Cortez, "You really need to do more research on these things".[25]

As a result of laying into Mermaids and being called out by hbomberman, he also has the distinction of being condemned for transphobia in the Scottish Parliament, in a resolution put forward by Patrick Harvey of the Scottish Green Party. The motion praised Harry Brewis (HBomberGuy) and trans children's charity Mermaids and criticised Glinner's attempt to remove funding from the charity. The motion noted that Mermaids "was chosen by Harry following pressure from a well-known television and comedy writer to have a planned lottery grant removed from the charity".[26]

He has now set up his own TERF social network as a ‘competitor’ to Twitter, called Glindr. He says this is important because Twitter is moderated by ‘women hating incels”. [27]

He claims to be a feminist, to the extent of having a blog at glinner.co.uk titled "Women Are Important".[28] However he is responsible for a lot of rather misogynistic comment, for instance saying of Dolly Parton "Riiight. And how about the fact that she's completely fucked up her face?"[29] and "Amazing how many supposed feminists are OK with women mutilating themselves in order to meet some utterly fucked up beauty standard. #parton"[30] This demonstrates his tendency to divide women up into good and bad (madonna-whore dichotomy) and only extend his feminism to the former.

Despite repeatedly insisting men should refrain from opinion that might amount to dictating the terms of feminist issues [31][32] (often as a rebuttal to cis men who question trans exclusionism), he has in the past belittled women-fronted causes that don’t meet his personal standards of worthiness. He once mocked discussion over the extent to which the marketing of feminine hygiene products perpetuate misogynist female grooming taboos, scoffing “"Pouring shame on body parts?" If there was a special soap for cleaning my penis, I'd be all over that shit. I would never go out again”[33]. When comedian and author Shappi Khorsandi endorsed Let Toys Be Toys, a campaign group promoting non-gendered marketing of toys, he sarcastically sneered “Hugely important issue. Nothing more important going on right now. Great use of energy.”[34]. This is doubly-hypocritical as he often couches his transphobia as gender critical thought, in a manner suggesting he has always cared about this cause.

Unsurprisingly then, this patriarchal attitude often spills over to his attacks on trans people, where he throws abuse at any cis women who defend trans women. He called the Women's March London "Traitors" for calling themselves "trans inclusive and intersectional".[35] He also refers to women who support trans rights or otherwise oppose him as "handmaidens", a reference to Margaret Atwood's novel about an anti-feminist patriarchal dystopia (The Handmaid's Tale).[36][37]

Blogger and ex-prostitute Brooke Magnanti (Belle de Jour) accused him of "whorephobia" (a hatred or fear of prostitutes),[note 1] tweeting "Also whorephobia. My Linehan brush was he kept tweeting how much he liked to wank to my writing (eww), so when I asked him to read a sitcom pilot I was working on, he freaked tf out and implied I was trying to destroy his marriage or something."[38]

He also attacked comedian Josie Long over her views on trans people, leading to Long temporarily deleting her Twitter account to avoid the torrents of abuse.[39]

More in the realm of insane self-parody/Poe's Law: Linehan went viral in January 2019 after quoting a trans woman saying that she would "nut so hard I would shoot a hole through the international space station" as proof that her gender identity was "actually just part of a racist fetish", because he believed that women can't "nut". It was pointed out that the word "nut" can refer to a male or female orgasm.[40]

His possible nadir was when a woman (and sexual assault survivor) asked him to stop calling women ‘females’ and pointed out that she had been assaulted by men, not trans women. He responded that “it’s not all about you.” [41]Because nothing says feminism like talking over a rape victim.