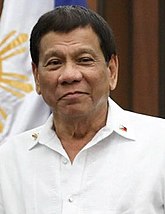 Rodrigo Roa Duterte (1945–) is the current Dictator President of the Philippines since 2016. He has been comparable to fellow authoritarian populist lunatics Donald Trump and Jair Bolsonaro for inappropriate remarks and being an outright dickhead. Unlike Trump, who only thought he could get away with killing someone in public, Duterte has actually repeatedly bragged of killing people extrajudicially while he was the mayor of Davao.[2][3]

He is known for his War on Drugs as soon as he became President and has often just killed anyone who does drugs because apparently doing drugs is way worse than murdering people. He has also been quite sexist and likes bragging about raping women[7] and otherwise attacking women's genitals.[8] Duterte also uses homphobic slurs, but it's okay, because he used to be gay[9], but Duterte's homophobia is not a more conservative position than that of mainstream Filipino politicians, who are heavily Catholic. Indeed, Duterte has made rather conservative and harsh remarks on the issue of LGBT, but in the Philippin standards, which is very conservative in actual policy, he is implementing a somewhat liberal LGBT policy.[10][11]

Crimes against humanity aside, Duterte has made many inflammatory statements in public: attacks against Pope (the "son of a whore"),[12] the Catholic Church ("full of shit"),[13] and a rape "joke",[14] none of which have seemed to sway public opinion of him.[15] The last straw may have been Duterte's insulting God:[15]

While he is often called the "Filipino Trump," which makes him sound like a reactionary, he self-identifies as a leftist. In fact, PDP–Laban, his personal party, is also a democratic socialist and left-wing populist party.[16][17][18][19][20] In other words, he is a very strange politician whose extreme right-wing tendencies and leftist populist aspects coexist.