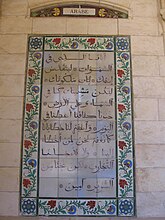 The Lord's Prayer in Arabic

The Lord's Prayer is a prayer found in the New Testament in the Gospel of Matthew and Gospel of Luke. Tradition says that it was taught by Jesus Christ to his followers, and it's been popular ever since.[1][2] It is also commonly known as the "Pater noster" after the first two words of the Vulgate Latin translation. Content-wise, it's basically the standard thing: yay God you're great, I'll be better, please be nice to me. But stylistically it's noted for its simple language and brevity.

The prayer is found in Matthew 6:9-13 and Luke 11:2-4. It is hypothesised that it was in the Q gospel, a common source for both Matthew and Luke. The contexts in which the prayer is said differ between the two: in Matthew Jesus teaches the prayer as part of the Sermon on the Mount, a speech to a large crowd on how to be a good person. He advises his 5000 followers to pray in private and not use ostentatious or repetitious forms of words. In Luke, Jesus is praying quietly on his own when one of his disciples asks him to teach them how to pray in the way John the Baptist did. So in both cases Jesus is offering a simple, private prayer for his followers to say.

It has been suggested that most elements of the prayer can be found in earlier Jewish tradition: for instance many Hebrew prayers start something like "Our Father which art in heaven"; "Hallowed be thy name" and "Lead us not into sin" are also found in Jewish sources.[2] But much of the prayer is also fairly simple and generic expression of faith.

The two texts in Luke and Matthew are likewise slightly different, although this may partly reflect later translation and editing. Whoever divided the books up into verses didn't bother to be consistent between the two. Either version is often extracted from the Gospels for use in prayer books, which allows further editing.

There is debate between Roman Catholics and Protestants, with the latter since the late 16th century adding a section known as the doxology: "For thine is the kingdom, and the power, and the glory, for ever and ever, Amen." In the King James Version, Matthew has the extra bit, while peace-loving Luke leaves it out. More sloppy editing, most likely, although Catholics are quick to claim they're superior for not corrupting the Lord's text — the doxology appears to be an eastern addition taken up by the Church of England because it sounds cool.[3]

Various English translations give slightly different versions of some of the prayer. It's hard to say this makes much difference, but there are a lot of close textual studies and debates over the literary merits of different versions. In 1994 the Church of England was forced to give 3 different versions in its prayer book because everybody liked a different one.[4] The most well-known are Thomas Cranmer's from the original Book of Common Prayer in 1549, and the revised 1662 Book of Common Prayer; but there are others including the boring 1980 Alternative Service Book. The first 2 words of each translation are the same.[4]

Cranmer in 1549 had it: "Our Father, which art in heaven, Hallowed be thy name. Thy kingdom come, Thy will be done, in earth as it is in heaven. Give us this day our daily bread. And forgive us our trespasses, As we forgive them that trespass against us. And lead us not into temptation;" to which is answered, "But deliver us from evil. Amen."[5]

By the 17th century it was slightly modified with the doxology added, and God became a "who" not a "which", which some people might take to be anthropomorphisation: "Our Father, who art in heaven, hallowed be thy name; thy kingdom come; thy will be done; on earth as it is in heaven. Give us this day our daily bread. And forgive us our trespasses, as we forgive those who trespass against us. And lead us not into temptation; but deliver us from evil. For thine is the kingdom, the power and the glory, for ever and ever. Amen."

A 1928 translation was used for a while both by Episcopalians and Roman Catholics, although the latter omitted the doxology: "Our Father who art in heaven, Hallowed be thy name. Thy kingdom come. Thy will be done on earth as it is in heaven. Give us this day our daily bread, and forgive us our trespasses, as we forgive those who trespass against us, and lead us not into temptation, but deliver us from evil." Plus optionally: "For thine is the kingdom, and the power, and the glory, for ever and ever Amen."[2]

In contrast in space year 1980 the Alternative Service Book prayed: "Our father in heaven, hallowed be your name, your kingdom come, your will be done, on earth as in heaven. Give us today our daily bread. Forgive us our sins as we forgive those who sin against us. Lead us not into temptation but deliver us from evil. For the kingdom, the power and the glory are yours now and forever. Amen."

One of the main differences is whether the forgiveness involves trespasses, debts, or sins. In prayer books, trespasses are most traditional in English and sins are more popular in plain-speaking modern translations. Bible translations more often mix it up: in the English Standard Version, Matthew has debts and Luke sins, while the King James Version gets really awkward with debts in Matthew but Luke insisting "forgive us our sins; for we also forgive every one that is indebted to us".

It is one of the most commonly said prayers, a part of many common liturgies for church services, and historically in strongly Christian societies (or anywhere with compulsory acts of worship such as traditional British schools) almost everybody would have recited it regularly and have a good chance of learning it off by heart.

But! There is a minority view, advanced by some in the Free Presbyterian Church of Scotland, that it's not really the universal prayer as commonly understood, but was given by Jesus especially to his disciples and therefore is only for the true believers.[6]

In the days before kitchen timers, the time to recite the prayer could be used to time cooking.[2] For this to be effective, it helps if you've repeated it at the same speed every week in church; if you keep forgetting the words your soup will burn.

If you say the Lord's Prayer backwards, then you can summon Satan or at minimum show your devotion to the Dark Lord by mocking or parodying Christianity.[7] The practice is preferably done in front of a mirror: reflective surfaces were traditionally used for scrying and other occult purposes especially in the days when they'd show strange or distorted shapes, rather than the perfect reflections of high-quality modern manufacture. There is some dispute over whether you just put the words in reverse order, or you speak it phonetically as if reversing a recording, or what. The Temple of Satan seems to favour a phonetic approach, although since they haven't yet established Satanic dominion over the planet, maybe they're doing it wrong.[8]

On the other hand, some Roman Catholic priests recommend saying the Lord's Prayer backwards as a penance.[9] So even saying it backwards may just get you closer to God, Alice in Wonderland style. And a lot of pagans are opposed to the practice because they want to establish paganism as an independent religion and they "dislike the view of it being perceived as a reaction or alternative to Christianity".[10] The practice may have influenced the later idea of backward masking in recorded music; there are also superstitions where if you stir things (tea, porridge, etc) the wrong way then bad things happen.

Cliff Richard's The Millennium Prayer sets the words of the prayer to the music of Auld Lang Syne, a folk tune collected by Robert Burns.[11] Because it's a very short prayer, Cliff wrote his own bit of padding as well.[12] It is widely reckoned one of the worst things ever recorded. It reached number one in the UK single chart despite most radio stations refusing to play it.[13] You can listen to it on YouTube and see the terrible video, but you're better off selling your soul to Satan.[14]

It has also been set to music by several other less well-known people including Pyotr Ilyich Tchaikovsky, Sergei Rachmaninoff, Igor Stravinsky, John Tavener, Brian Wilson, Lisa Gerrard (of Aussie goths Dead Can Dance), and some monks.[2]