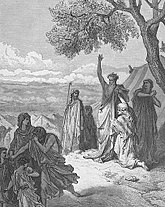 "Noah Curses Ham and Canaan" by Gustave Doré
Not to be confused with the religious practice of not eating pork, or the creationist

The Curse of Ham (also known as Noah's Curse or the Noachid Curse) refers to an incident in the Bible, in the book of Genesis, regarding Noah (after the Great Flood) and his sons, Shem, Japheth and Ham.

20 Noah, a man of the soil, proceeded to plant a vineyard.
21 When he drank some of its wine, he became drunk and lay uncovered inside his tent.[note 1]
22 Ham, the father of Canaan, saw his father's nakedness and told his two brothers outside.
23 But Shem and Japheth took a garment and laid it across their shoulders; then they walked in backward and covered their father's nakedness. Their faces were turned the other way so that they would not see their father's nakedness.
24 When Noah awoke from his wine and found out what his youngest son had done to him,
25 he said,"Cursed be Canaan! The lowest of slaves will he be to his brothers."
26 He also said, "Blessed be the LORD, the God of Shem! May Canaan be the slave of Shem.
27 May God extend the territory of Japheth; may Japheth live in the tents of Shem, and may Canaan be his slave."[note 2]

Some Biblical scholars believe this anecdote was added to the scriptures as a rationalisation justifying the Israelite conquest and enslavement of the Canaanites later in the Old Testament. Ironically, one of Ham's grandsons, Nimrod, becomes the worlds' first Empire-builder, starting with the Tower of Babel, which undermines the curse in terms of Africans since Nimrod's father was Cush.

The Canaanites, descended from Ham via his son Canaan, have historically been regarded as the ethnic ancestors of the black peoples of Africa. Although Genesis does not identify Ham's skin colour, some ancient Jewish writings, including part of the Talmud, state that either Ham or Canaan had his faced "blackened" by God as part of curse, in punishment for Ham seeing Noah's nakedness and not covering him, or, in some variations, for copulating while aboard the Ark.

This idea became more widespread in Europe during colonialism, as an argument for the inferiority of the black race, whose dark skin was believed to be an outward sign of the curse, and to sanction some instances of slavery. The belief was at its most popular during the 18th and 19th centuries, to justify the Atlantic slave trade and plantation slavery in the British sugar islands and American South.[1] Noah's decree that Canaan should be the slave of Shem was seen as God's command that Africans should be the slaves to white Christians.

Although overwhelmingly discredited and largely forgotten, racial arguments based on the Curse of Ham are still clung to by some white supremacists, including blogger Alan O'Reilly and some members of Stormfront. During 2008, various ultra-conservative and racist blogs and websites invoked the Curse of Ham as an argument against Barack Obama's campaign for the United States Presidency. Apparently white supremacists can't think any better than the Bronze Age herders who wrote that part of the Bible; nor do they see the irony in using a Jewish text to justify their racism. Because of the lack of mentioning of the skin color, one of their Afrocentric counterparts, the practitioners Nuwaubianism believe so-called white people to be the descendants of Ham and that the curse consists of leprosy and albinism.

The fully functioning rational mind raises a few questions about the Curse: