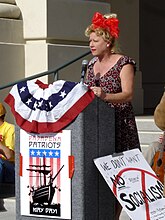 Jackson was a B-list cast member on Saturday Night Live during the late 1980s and early '90s. Her most memorable role—a real stretch for her—was as an airhead anchorwoman on Weekend Update alongside Dennis Miller.[1] The character was known for her god-awful poetry.[2] She was also known for her celebrity impressions and appearances in "Toonces the Driving Cat" sketches.

Otherwise, to "Weird Al" Yankovic's fanbase, she is known for her performance in UHF as George's love interest, Teri.

Jackson launched her political career in 2000 by learning how to vote.[3] In 2009, she became a foot soldier in the war against creeping Obamunism by joining the ranks of the Teabaggers. This helped land her a cushy position as a regular blogger on Andrew Breitbart's Big Hollywood site. In 2010, WorldNutDaily allowed her "thoughts" to grace the pages of its website by giving her column space. She has claimed credit for her "prescient" prediction of Obamunism:

She claims to be able to play the ukulele and has released a not-so-great hit called "There's a Communist in the White House."

She is also very annoyed by the TV show Glee for its anti-Christian agenda and "shoving the gay thing down our throats."[5]

Her behavior has led to suspicions that she is a deep cover liberal or aping Andy Kaufman. She denies these allegations.[6]

Victoria Jackson and the Muslims[edit]

In late 2011, Jackson claimed to have been privy to a six-hour long "briefing" "across the street from the Capitol" where solid evidence of a Muslim Brotherhood plan to take over America was revealed to her in her capacity as member of the Department of Homeland Security's Washed-Up Comediennes Office. Oh, and Obama is a Muslim. [7]

After the December 2012 Sandy Hook massacre, Jackson linked the shootings with abortion and blamed them on public schools forgetting the Ten Commandments.[10]

She engaged in comedy of an entirely unintentional sort when she was taken in hook, line and sinker by a parody article in the National Report decrying Barack Obama's spending July 4th at a mosque.[11]