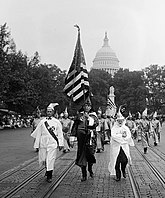 A Klan rally. That dome in the background looks awfully familiar.

White supremacy or white supremacism refers to the fuck-wit stupidity which claims that white people are superior to others, or are a "master race" or some other such nonsense. An easy (but not necessarily foolproof) way to spot a white supremacist is their insistence on capitalising the word "white".

There are three basic types of white supremacists. The first type of this species wraps themselves openly in the symbols and regalia of Nazis, Fascism, and/or the Ku Klux Klan.

The second type is more insidious. These racists avoid identification with the first type and wrap themselves in the language of anthropology and archaeology. This second type is fond of parading forth statistics relating to skull size, brain size, comparative IQ, crime rates, and other quack pseudoscience from the 19th century that was discredited not long after, as well as pseudo-libertarian bullshit about "freedom of association". They may also be identified by their apparent inability to distinguish correlation from causality.

And there's a third, more careful class of white supremacist. They're the conservative Tea Party types: those who say, "I love black people, but they're more violent than white people." It's clear that they think they're superior to non-white people, but they couch it in economic and traditionalist language rather than even separatist language. Discussions of this sort inevitably spiral into apologia for slavery and the term "white genocide" getting thrown about. Ironically, they think other races are plotting to exterminate white people.

Despite the label, the apparently "white"[note 1] Jews are often the targets of white supremacists, often ranking among their preferred victims. Paradoxically, the Jews are often characterized as devious tricksters, a trait which would theoretically require a great deal of intelligence, which should, in turn, lead to their inclusion among the "higher races". However, the supremacists seem to think that a genetic propensity towards virtue and extreme gullibility are more important to the master race than intellect. If the above makes not a lick of sense, it has nothing to do with the contributor's ability to express ideas; the rhetoric of white supremacy is really just that ass-backward.

And really, if even a shred of white supremacy is to be believed, one should take note that they can't make a single decent video game faithful to their views (and probably reflective of their intelligence).

Due to negative publicity in modern times, many white supremacists no longer directly claim whites are superior but, instead, attempt to steal rhetoric from racial minorities by claiming that white people are an oppressed and disadvantaged group. "White Pride" is the term some supremacists use to claim that they are simply proud of their white/Aryan heritage rather than claiming that their heritage somehow makes them better than other races. They often point to Black Pride or Asian Pride groups as a double standard or reverse racism that they can form without a second thought while any White Pride is declared racist by default. This claim quickly falls apart under any sort of inspection. For instance, they say that if Black pride is allowed, then White pride should be socially acceptable also. But there is a non-equivalence in the definitions of Blackness and Whiteness. Blackness is defined by possession of Black heritage, whereas Whiteness is defined not by the possession of White heritage, but by possessing only White heritage (see one-drop rule). Barack Obama, for example, has one Black parent and one White parent and is considered Black by most people but not White (and he does not "pass" as White). Black pride, therefore, means being proud to have Black ancestors, but White pride means being proud to have only White ancestors, which can indeed be seen as offensive. If they really wanted to be equivalent, they could create (for example) a French Pride parade… where Haitians and other black people with French heritage are also allowed to take part. Such Pride parades already do exist; everyone is Irish on St Patrick's Day. Pride in one's heritage is okay—that's what Black pride is. Pride in one's skin color being superior is not okay—for example, White pride. Another example: a person with African and British heritage can have Black pride (aka pride in their African heritage) and pride in their British heritage. It goes without saying that Whites can take pride in their European heritage as well; nobody's contesting that idea. It's just that anything motivated by skin color is, again, a red flag.