From RationalWiki
Jump to navigation Jump to search
Wisconsin 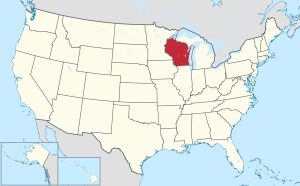 This place is the perfect place for cows to live.

It's a pretty fucked up world in which Joe McCarthy is only the 4th-worst politician to come out of Wisconsin, maybe 5th depending on how you rank Sensenbrenner. Since 1896, it has gone Republican sixteen times (latest being Donald Trump), Democratic fourteen times, and Progressive once (when Wisconsin governor Robert "Fighting Bob" M. La Follette, Sr.

Wisconsin is actually like 12 states that hate each other to various extents. There's Milwaukee, the Milwaukee suburbs, Beloit-Janesville, Fox River Valley, "Up North", Menominee (St Paul suburbs), the Coulee/Driftless region, and Madison. All slightly different culturally, with their own local histories and identities. About the only thing everyone agrees on is "Fuck Madison".

It's worth noting that, not only did the Republicans carry Wisconsin for the first time in decades, Trump lost the WI primary...to Ted Cruz. Former state GOP Chairman and sitting national Chairman Reince Preibus was rewarded for delivering Wisconsin with the position of White House Chief of Staff. Baldwin was the last statewide Democrat for awhile, but she was reelected by double digits in 2018, and not only that, Democrats finally got Walker out of office--narrowly replacing him with Tony Evers,[6] and also beat every single Republican running for all statewide offices. In 2020, Joe Biden was narrowly able to win Wisconsin back largely due to increased turnout in Milwaukee and Madison, with a margin of only 0.6% — however, this was actually a better performance in the state than Al Gore's or John Kerry's, who only won by 0.2 points and 0.4 points respectively. Maybe Wisconsin just wasn't as safely blue as many people thought it was.