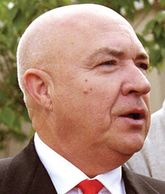 Thomas Linton Metzger (1938–2020) was the American founder of the neo-Nazi, white supremacist organization White Aryan Resistance, a Grand Dragon of the Ku Klux Klan for California where he started Klan Border Watch, and a minister in the Christian Identity Movement. He advocated murdering innocent black people, for which he was sued and lost his shirt, as well as his house. He was the subject of several government inquiries and lawsuits.

Metzger liked long prison walks, soap-on-a-rope, swastikas, and wearing Bart Simpson T-shirts.[1] He reputedly was friends with Glenn Spencer, Hal Turner, and Sean Hannity.[2][3] (Rush Limbaugh wanted to be friends, too, but they considered Limbaugh to be a political liability.)

The Southern Poverty Law Center brought suit against Metzger on behalf of family members of murdered Ethiopian student and father, Mulugeta Seraw, for Metgzer's part in inciting skinheads to engage in violent confrontations with minorities. A jury awarded $12.5 million against Metzger and his organization, White Aryan Resistance, of which Metzger was responsible for $5.5 million. The SPLC caused the court to attach Metzger's home, tools, and vehicle in partial satisfaction of the judgment.[4] Metzger went on welfare and moved to Warsaw. Unfortunately, either his knowledge of geography wasn't very good or those crazy Poles played a Polish joke on him, and he ended up in Warsaw, Indiana, where he continued to advocate the same crap that got him in trouble.

He was incarcerated in Los Angeles County, California and in Toronto, Ontario, in the latter case with his son John.

During his Ku Klux Klan days Metzger held strictly extreme-right views but later came to see himself as more aligned with the left than the right, on the grounds that the right was too mired in conservatism and he identified with the far left's militant revolutionary stance. This shift coincided with his leaving the Klan to start his own group, White Aryan Resistance. Metzger is often described as a Third positionist because of his identification with the left. Among other things, he praised the former Soviet Union as a "white workers' state", promoted Jack London's socialist and anti-fascist novel The Iron Heel, published cartoons attacking American conservatives for cheering for black U.S. athletes over white Soviet Bloc athletes in the Olympics, and proclaimed support for striking union workers in the American Midwest and for hard green group Earth First!—in both cases because they were fighting against companies who happened to be owned by Jews.

However, any support for the militant left he had came to a grinding halt if the people in question were not white. He was, above all else, a white racist and described his ideology first and foremost as racist. His support for the left came a distant second, and any support for the conservative right third after that, and in either case only if they coincided with what he perceived as the interest of white racism.

In 1980 he barely squeaked out a victory in a three-way Democratic Party primary for U.S. Congress in California's 43rd congressional district, running as an openly white supremacist Klan leader (this was before his claimed shift to the "left"). The district, based in Orange County, was heavily Republican, and the sitting representative, Clair Burgener, pwned him by 86.57% to 13.43%. It didn't hurt Burgener that the national and state Democratic parties endorsed him over Metzger.[6]

After his trial he began advocating a "lone wolf" strategy and advising white racists against joining any established groups.

In 2010 he ran as an independent candidate for U.S. Congress in Indiana. His campaign site listed a populist platform (repeal NAFTA, jail for BP oil executives, cut military spending, bring the troops home, end foreign aid, moratorium on immigration, etc.) without mentioning White Aryan Resistance or his role in the white supremacist movement. Politics1.com accurately described him as a white supremacist/neo-Nazi and frequent candidate.

Metzger was a member of Christian Identity in the 1970s but left it about the same time as he left the Klan to start White Aryan Resistance. He later identified as an agnostic and was supportive of Odinism, Satanism, Atheism, Creativity as well as the aforementioned Christian Identity, as long as the person in question was above all a white racist.

Metzger pioneered the use of public-access cable TV by white nationalists in the 1980s with his show Race and Reason. Race and Reason was notoriously ecumenical by the standards of the white racist movement, interviewing and promoting many different groups who wouldn't otherwise talk to each other—the Creativity Movement, Satanist musician Boyd Rice, Aryan Nations leader Richard G. Butler, Christian Identity, the racialist wing of Asatru, the Ku Klux Klan, 1980s tax protesters like Posse Comitatus—and even black nationalist and Nation of Islam leaders in an attempt to find common ground over shared racial separatism and hatred of Jews.

He also published a newspaper, WAR, which was a venue for obnoxious racist cartoons, articles by Tom, and bad poetry, and also in the 1980s pioneered the use of recorded telephone messages by white nationalist groups. His weekly recorded telephone hotline was still running as of 2010. Sometime in the mid '00s he changed the name of his group from White Aryan Resistance to The Insurgent, and moved from his longtime southern California residence to Indiana.

Metzger also featured prominently in the Louis Theroux documentary Louis and the Nazis wherein Metzger, his lawyer and Theroux travel on a bizarre "diplomatic mission" to Mexico which mainly entailed getting shit-faced on cheap Tequila.