The following is a list of secular holidays, some of which support the advances of science and human rights.

The beginning of the year. Celebrated around the world. Called Dia da Fraternidade Universal ("Universal Brotherhood Day") in Portugal and Brazil. Although now it is mostly a secular holiday, it was both a Roman (celebrating the god Janus) and Christian holiday (Feast of the Naming and Circumcision of Jesus).

Date of adoption of Thomas Jefferson's Statute for Religious Freedom in Virginia, which protected atheists, Muslims, and Christians alike.[1]

March 6: The Day of the Dude[edit]

Release date of The Big Lebowski 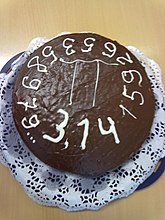 Celebrating the fact that mathematicians will never get π exactly right.

Day celebrating the ability to peer into government records — what is more democratic than knowing what your government is doing?[12]

The day varies between March 20 and March 23 in the Northern Hemisphere. The day represents the "rebirth" of good crop weather.[13] Has shitty memes.[14][15]

Alternative to Easter. Celebrates the Anglo-Saxon goddess of sex, love, fertility (hence rabbits and eggs).[16] Has been appropriated by those nasty Christians.[17] Has memes.[18][19][20]

Saint Stupid would have given us free iPhones & ponies if he had thought of them.

Because April Fool's needed an owner.[21][22] April 1 is also the only holiday of the The First Church of the Last Laugh, known as Saint Stupid's Day.[23]

Celebrates space and technology and the principles of freethinking.[24]

The Earth is pretty nice, maybe we should try and keep it that way.[25]

of 1974, which brought down the regime founded by António de Oliveira Salazar), but can also be seen as the definitive beginning of the end of colonialism (the Portuguese Empire

, the last of its kind, started colapsing at this point).

Also, in 1945, the Soviets and the Americans ended World War II in Europe by meeting at the Elbe River near Torgau in

which celebrates the end of the so-called "Italian Social Republic"

(aka Benito Mussolini's German-controlled puppet state after he was deposed by the king and freed from his imprisonment by the Germans). Total anti-fascist day!

Honesty, especially of intellectual inquiry, is surely a humanist value.[26]

The version of Labor Day that is celebrated by most countries in the world and recognised by the United Nations. Commemmorates the Haymarket affair

(which actually happened on May 4, 1886), an early notable workers' rights violation.

Also overlaps with May Day, a holiday of religious (Pagan) origin celebrating Spring, but nowadays is a secular celebration.

The NDR was created by the American Humanist Association and Washington Area Secular Humanists in 2003.[27] NDR celebrates constitutionalism and rationality. The day is a contrast to the NDP.[28]

Emancipation Day in 1900, which later became known as Juneteenth

First reading of the Abraham Lincoln's Emancipation Proclamation in Texas. Recognized by 43 states.[30]

A day to show that humanism exists and is a positive force.[31]

Date of execution of the Chevalier de la Barre for impiety in 1766.[33]

American Independence Day: The origins of a country with strong constitutional backings for irreligion, especially at the time.

AKA French National Day. The Storming of the Bastille

(1789), a turning point of the French Revolution, which represented the beginning of the end of feudalism as well as the power of Enlightenment ideas.

Date of end of (literal) slavery in almost all of the British Empire.[36]

Freedom of knowledge is a key tenet of humanism.[42]

A month inspired by a community of German freethinkers in Texas.[50]

Another "coming out" day — this time, for atheists, agnostics, and other freethinkers.[53]

Day (of 1945) on which the United Nations Charter

(the document which founded the United Nations) entered into force.

To celebrate not living in a theocracy.[58]

See the main article on this topic: Thanksgiving

Day of thanks and/or gluttony.[59]

Day of not living in an autocracy.[60]

Discworld/Pratchett holiday. Pun on "hogwash" and "Hogmanay", the Scottish New Year celebration. In the Discworld universe, it is celebrated much like Christmas, but the pseudo-Christian "Omnians" call it "Fast of St Ossory".[70] Has memes.[71][72]