From RationalWiki
(Redirected from Nanobot)
Jump to navigation Jump to search

Nanotechnology (often referred to as "nanotech") is the art of working on materials at the nanometer (one billionth of a meter) scale, hence the name.

There is no single unified thing that can be called "nanotechnology." Rather, many different technologies and industries are reaching the point where nanoscale operations are of interest. In previous years, we might have called this "chemistry" or "materials science", though a lot of this is now being called straight-up "nanotechnology."

There are two sorts of nanotechnology: reality, and science woo.

In practical terms (i.e., funding it), it's chemistry with "nano-" on the front because that gets funding from people who think they're paying for magical molecular robots. Emphasis on "magical." This is improving a bit, as chemistry funders realise the non-magical version is worth it in itself. Real nanotech is great stuff!

The idea was first postulated by Richard Feynman in his 1959 essay There's Plenty Of Room At The Bottom.[1] The talk was not widely noticed and did not result in any actual follow-up research; it was rediscovered and used to promote the field exploiting Feynman's fame.

The scanning tunnelling microscope (STM) was invented in 1981, which enabled microscopic imaging of individual atoms, and a STM was first used to manipulate individual atoms in 1990. In the 2000s and 2010s, advances in atomic force microscopy (AFM) led to the first pictures of individual orbitals. None of this progress yet means that nanorobots could be mass-produced. Nanomachines have been actually made with the methods of conventional organic synthesis, but this term is not as sexy as "nanotech".

From the late 1980s on, it was popularised by K. Eric Drexler, in his 1986 book Engines of Creation: The Coming Era of Nanotechnology and the work of science fiction that Drexler used as a Ph.D. thesis. (Drexler's Ph.D. is much-touted as being from MIT, but was not awarded by an actual science or engineering department — he got it in the Media Arts and Sciences Section of the School of Architecture and Planning.)[2]

Nanotechnology fanboys — as opposed to the people who actually work with the stuff — have a habit of downplaying Feynman's origination of the idea and playing up Drexler, possibly because the latter is far more indulgent of their fantasies.

Dr. Drexler, most upset that the National Nanotechnology Initiative insisted on only funding things that do not actually defy physics,[3] has taken to using his new favored terms, "zettatechnology"[4] or "atomic precision manufacture".[5]

The popular conception of nanotechnology is Eric Drexler's concept of nanobots, like industrial robots scaled down a billion times. This is entirely made of bollocks and would violate physics, chemistry, and thermodynamics.[6][7] However, not many people realise why it's bollocks, as it isn't really due to us limiting what our technology might one day do, it's purely down to the physics of how the world works.

The rules of mechanics don't scale evenly with size — consider surface to volume ratios, which are why the energy consumed by small rodents per unit of mass is different from that for elephants, and why the aerodynamics of a Boeing 747 are different from a small 747-shaped toy. At the molecular level, the world is considerably different from macro scale. A solvent like water would feel more like treacle, and anything floating in it would be at the mercy of Brownian motion that would make even the strongest rip currents look quite weak.

Imagine what manufacturing would look like if your machines' gears rotated randomly, the size of the gears' teeth fluctuated randomly, everything (gears, grippers, working materials) was magnetized and the whole factory burst into flames at the first hint of rust.

That Drexler has pushed an idea which is actually impossible has not deterred nanotech fans, who get as upset as they usually do when an expert in a field they're talking about points out they're simply wrong, apparently from an emotional sunk cost fallacy.

Transhumanists routinely casually throw biology out the window, but with nanobot advocacy they manage the same contempt for chemistry and physics. (Michael Anissimov, then of SIAI, advocated Digital Rights Management as the way to control dangerous science woo nanotechnology,[8] thus also casually throwing mathematics out the window.) In cryonics, "but, nanobots!" is the standard answer to any objection. Some cryonics advocates are finally pointing out that this is not quite rational.[9]

Advocates of the woo version of nanotech often tag life "soft nanotech", as if that makes "hard nanotech" (woo) merely unrealised rather than impossible. This is in reference to the fact that such "hard" nano-tech seems to imply solid, robot-like structures (made of diamond, for example) while "soft" is closer to more malleable molecular structures. It's a bit like calling speech "soft telepathy" to imply that "hard telepathy" is a difference of degree, rather than kind.

Drexler's vision of nanobots is a standard science fiction trope for magic. Applications include superhuman healing and body repair, superhuman powers, shapeshifting machines, constructing large structures at a miraculous pace,[10] self-repairing materials, instantly taking over and reprogramming any computer system[11] or even a person.[12] Alternatively, a swarm of nanomachines can be a weapon, eating anything in its path like locusts.[13]

One common version is self-replicating nanomachines, which convert any available matter into more nanomachines to replenish and bolster their numbers. If left unchecked, these machines convert everything — the so called "grey goo" doomsday scenario.[14] The idea of creating self-replicating machines, which was an early goal of nanotechnology, has given way to the safer and simpler approach of building larger (relatively speaking) factories that can mass-produce nanomachines, making this scenario less likely to occur in reality.[15][16] That said, the basic concept of self-replicating machines is solid in itself and some research has been done on creating them on a larger scale, and cellular automata like von Neumann's universal constructor can be argued to act as an abstract simulation of a Drexler-style replicating nanobot.

Writers like these little things because they don't have to show and explain how they work — all you see are the results.

A slightly more believable description of nanotechnology can be found in Neal Stephenson's book The Diamond Age.

In this, not only is there a detailed description of how the machines would be built, there is even a discussion of associated problems, such as heat dissipation.

Reality is not as fantastically exciting as the fiction — but it's still pretty cool. 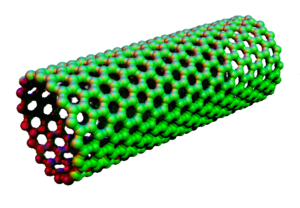 A chemical diagram of a carbon nanotube.

Current nanotechnology focuses on creating much simpler structures, such as nanoparticles that can deliver drugs to specific cells, and materials with advantageous properties. Better understanding of materials at the nanoscale is explaining many apparently odd things. Nanoparticles (colloids) of gold are red, rather than yellow as the bulk metal is, and this effect is responsible for the colours of medieval stained glass. Some of the odd properties of soot are because it contains buckyballs (a.k.a., Buckminister Fullerene) and nanotubes. Scientists working on these nano-scaled advances tend to refer to it as either "chemistry" or "materials science", as "nanotechnology" is not a functioning research field in its own right and is just an umbrella term for a variety of research ventures that span multiple disciplines (and a handy buzzword to get funding from people who think they're buying magical robots).

Molecular recognition — the ability for catalysts to actively recognise and orientate their substrates — is an emerging area of research and could become the norm for chemical synthesis in a few decades. However, this still relies on normal chemical synthetic routes with one catalyst tuned to one reaction (or group of reactions).

Molecular nanotechnology, which aims to engineer mechanical systems at the molecular level, is barely in its infancy. The dream of assembling molecules "atom by atom" may not even be possible in the sense claimed by those writing about nanobots. So far, scientists are pretty good at arranging atoms in patterns with a scanning tunneling microscope (STM), as was famously done by IBM to demonstrate STM technology, and making "quantum corrals" that demonstrate the wave-like properties of electrons. If nanomachines are built, they will work much more like the currently-known nanomachines — antibodies and proteins and so forth, restricted to catalysing only one family of reactions — and more complicated nanomachines will be closer to the size of biological cells.

Mechanical nanocomputers are theoretically possible, and research is steadily getting there. So far there's a 300nm electromechanical reed relay gate[17][18] and an inverter that runs at 500kHz.[19] The application is for environments that would trash electronics, e.g. high temperatures. For comparison, current computers' electronic transistors are on the order of 7nm (as of 2017)[20][21][22] and mainstream consumer computer chips run at between 1GHz and 4GHz or so.

That's not to say that this stuff isn't insanely cool. For instance, sending in a specially-designed killer molecule to cure cancer.[23] Holy crap!

There are examples of self-replicating machines that dig into the ground and vacuum up the atmosphere. They sense the available resources of the surrounding territory and assemble useful products, even erecting mini solar panels to assist the process as well as producing the next generation of their initial seeding mechanism, all fully automated and largely unattended. They are called things like "tomato plants".

Nanoparticles of titanium dioxide are used to whiten some food products like jawbreakers/gobstoppers.

Nano-sized particles (<100 nm) have been used in consumer products, including clothing, electronics and cosmetics and food, for at least two decades. The safety of nanoparticles in food is not well understood, and is still being investigated, though modest amounts are believed to be safe. In the US, nanoparticles in food are currently regulated the same as any chemical additive. Titanium dioxide, silicon dioxide and zinc oxide are currently the most common nanoparticles added to food.[24]

Tiny self-replicating nano-machines have already existed for millennia. They are called viruses. As you can plainly observe, even though viruses are rapidly evolving and recursively self-improving, they haven't ended all life on Earth. Spreading the myth that self-replicating nano-machines are a future new super-technological threat only causes unjustified Fear, uncertainty and doubt.

Viruses have killed millions of humans but thanks to advances in medical science (especially vaccines), we can fight back. Humanity has wiped out Smallpox.

The main practical problem with nanotechnology is the phrase being overused as funding hype for what anyone else would call materials science or synthetic biology.

Nanoparticles are small enough to mess with biological processes.

The mechanism of carcinogenicity for asbestos is frustrated phagocytosis, i.e., the inability of a phagocyte to engulf its target.[25] This mechanism likely also applies to other similarly-shaped, biologically-inert substances such as nanotubes and nanowires that meet the same length threshold for pleural retention of 5 µm, as asbestos does.[26] In 2017, The International Agency for Research on Cancer concluded that some types of multiwalled carbon nanotubes (specifically, MWCNT-7) are carcinogenic in experimental animal studies.[27]

Cadmium and some cadmium compounds are carcinogenic to humans.[28] Quantum dots contain cadmium and there has been work to reduce the potential toxicity of quantum dots.[29]

Eva Oberdörster reported that fullerenes (C60) in colloidal form caused oxidative stress in juvenile fish at a concentration of 0.5 ppm.[30]

More generally, nanoparticles that occur in pollution, known as "fine particles" (<2.5 µm wide), are known to cause both respiratory and cardiovascular health problems.[31] There is also some evidence that inhalation of fine particles cause other diseases, including diabetes, obesity and dementia.[31] A study showed that humans who inhaled relatively-inert gold nanoparticles had the particles in their bloodstream after 15 minutes and the particles remained in the body for as long as 3 months.[31] This study demonstrated the mechanistic plausibility of inhaled non-inert types of nanoparticles causing non-cardiovascular/non-respiratory diseases.