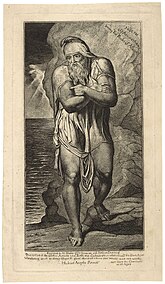 Joseph of Arimathea was supposedly a wealthy follower of Jesus at the time of the crucifixion, a member of the Jewish council, the Sanhedrin. He allegedly buried Jesus in a tomb which he had prepared for himself. He is a saint in several Christian denominations, notably Catholicism and Lutheranism.

According to a medieval legend, he eventually brought the Holy Grail (the cup or, better yet, this) to England and buried it near Glastonbury close to the site where Glastonbury Abbey would later be built. Joseph is of course referenced in Monty Python's movie on the grail.

Joseph also, in common legend, stuck his hawthorn staff into the ground at Glastonbury where it promptly rooted and bloomed every subsequent Christmas.[1]

In contrast to many other places mentioned in the Bible, there is no evidence that Arimathea existed (despite attempts to equate it to Ramallah, Ramah, etc). The name Arimathea means "best disciple town", so it's a bit suspicious as an invention.[2] Joseph himself is never mentioned again, and does not appear in extra-Biblical sources. It's also unclear whether Joseph would have had the time to bury Jesus as described, with the necessity to negotiate with the Romans, buy cloth, get the body, and place it in the tomb by nightfall. And a prominent Jew would not have been able to handle a corpse before Passover without becoming unclean.[3][4][5] There is also the contradiction that the Sanhedrin is supposed to have unanimously condemned Jesus to death (according to Mark), and yet supposedly Joseph was on the council.[6]

Since the Bible elsewhere suggests Jesus was abandoned by all his disciples, Mark and the other evangelists need some way to have him buried, and may have invented this convenient fiction. Alternatively, since the Gospel of Mark allegedly shows limited knowledge of Biblical geography or Jewish customs,[7] he may have presented a garbled version of true events.

Three other men called “Joseph” are relevant to Abrahamic religions:

For details, see the individual articles.