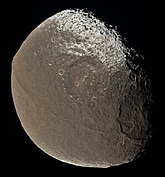 Iapetus as seen by the Cassini probe in 2004. The long ridge corresponds closely with the equator.

Iapetus is a moon of Saturn (the third largest one), and one of the most unusual bodies that orbit the ringed planet.

Iapetus was discovered by the French astronomer Giovanni Domenico Cassini in 1671. He noted that it was visible on Saturn's western side but not the eastern one until he got a better telescope decades later — telescopes were hard to come by in those years, it seems — and found a much fainter Iapetus there. He suggested that was caused by that moon having like the Force a light side and a dark one, with the former pointing to Earth on the western side of its orbit and the latter on the opposite, while other astronomers proposed that it could be originated by Iapetus having a very irregular shape.

Besides its orbital parameters[1], little more would be known until the Voyager

probes flew by the Saturnian system in the 1980s and found Cassini's hypothesis to be correct, and much more would be discovered more than two decades later when the (unmanned) Cassini

spacecraft arrived at the Saturnian system. Besides whizzing by Iapetus in 2007, Cassini also studied it from far away.

Iapetus' very low density, similar to that of water, suggests it's mostly composed of water ice with just a small rocky component.

The space probes Voyager and especially Cassini have found Iapetus to be a very heavily cratered body, scarred with a whole lot of impact craters, with several large basins, the largest of which, named Turgis, gives it a very Death Star

-like look.[2][note 1] Nonetheless Iapetus' most distinct geological feature, besides its two hemispheres so different in color, is a massive ridge of mountains, in addition to smaller ridges and isolated mountains, with a heights of up to 20 kilometers over the surrounding terrain, that gives it a walnut-shaped look.

As for its two-tone coloration, one hypothesis suggests that it was formed from a mix of organic residues left behind by sublimation of Iapetus' ices plus capture of infalling material, most likely from a very extended, tenuous, ring within the orbit of Phoebe

, the outermost of Saturn's classical moons.

The conspiracy theory YouTube channel "secureteam10" claims that Iapetus is a constructed object with a giant welding mark along one ridge. secureteam10 also stated that the moon is like the Death Star

in Star Wars.[3][4]. This idea is also supported by Richard C. Hoagland on his website using his typical abilities to misinterpret pictures, overblow them so one can see whatever he/she wants on the individual pixels, and worse, claiming Iapetus' dark material was originally an anti-radar coating[5] and that is actually a huge Platonic solid

Iapetus very likely formed at a different time than Saturn's other moons, specifically, according to a recent study, all of Saturn's moons beyond the orbit of Rhea

formed no more than one hundred million years ago, meaning that Iapetus (alongside Titan

) are two of the few primordial moons of Saturn.[7] One hypothesis is that Iapetus formed from the collision of two different moons, which would help to explain the equatorial ridge and the light side/dark side feature.[8]. Other theories include that said equatorial ridge is a remnant of Iapetus' formation, when it was not tidally locked to Saturn as is now[9] or that is what remains of a ring system Iapetus had and that was accreted[10].

Curiously enough Iapetus has the most inclined orbit of all the largest moons of Saturn, which means from it one would be able to clearly see the rings of Saturn, not as at best -except from Titan where one would see just orange haze- a thin line as happens in the other major satellites[11].