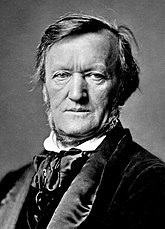 Richard Wagner (1813–1883) was a German Romantic composer of opera. He was one of the most famous and influential opera composers in history; he essentially invented leitmotifs, a system of writing operatic music that serves as the basis of most modern film scores. He also was innovative in the complexity of his music, inspiring the atonal works of composers like Arnold Schoenberg and Igor Stravinsky, and invented various new ways to stage an opera.

Wagner was a 19th century person through and through and he was born in one petty German kingdom (Saxony) and ultimately died in the employ of another German monarch (Ludwig II of Bavaria, of Neuschwanstein fame). He built a house in Bayreuth with the odd name Wahnfried and had a new opera house built that is still used exclusively for Wagner music once a year and sits empty during the rest of the year. If you say anything against Wagner in Bayreuth, the townsfolk will chase you out of their Wagner shrine with torches and pitchforks.

Wotan and Brünnhilde discuss the fate of Siegmund, illustration of Die Walküre by Arthur Rackham
Ride of the Valkyries

Wagner's compositions were mainly operas. He did write a few purely instrumental pieces; however, they are mostly considered insignificant next to the monoliths in music history that are his operas. His middle and late works are rich in their complex harmonies and orchestrations, as well as their elaborate use of leitmotifs. It is his operatic cycle in four parts Der Ring des Nibelungen (The Ring of the Nibelung) that is his most famous work. Though not many people today have even heard of Wagner, most have heard his music, as he tends to be a popular choice for musical cues and stings:

He was also responsible for the creation of the instrument known as the Wagnertube (plural Wagnertuben, often mistranslated Wagner tuba/tubas), which fills the "hole" between the brassier sound of a trombone and the smoother sound of a horn.

Outside of his lengthy music and distinct operatic style, Wagner is often remembered today as being anti-Semitic; he famously wrote a pamphlet called "Jewishness in Music",

decrying most Jewish composers and poets of his time as owing their success to hype, and not possessing any remarkable talent. These views didn't stop Gustav Mahler, a Jewish Austro-German contemporary of Wagner, from idolising him and respecting his music greatly. Both Wagner's views and music were said to become inspirational to Adolf Hitler (although this wasn't shared by all members of the Third Reich), who viewed them as quintessentially German. Of course, Hitler also viewed Chopin's music as inspirational. So, despite Chopin's Polish heritage, and Nazi view of the music of the Second Vienna School as degenerate because… umm... something (apparently he smelled one Jew too many).[note 1] Wagner's antisemitism and popularity among the Nazi leaders was the reason why his music can't really get a foot in the door in Israel to this day, even though pre-WWII, his music was rather popular among the Zionist movement in general and with Theodor Herzl and the Palestine Orchestra[note 2] in particular.

Television and film star and National Treasure Stephen Fry is also a massive fan of Wagner despite also being culturally Jewish, and in 2010 made a documentary on the subject which focused partially on this disconnect between Fry's heritage and Wagner's views. Musicologists who think that it is impossible to separate the art from the artist are often confused by this, but evidently, it is possible. However, Wagner would've been appalled by the Nazis since he was a socialist and Nazis are, well, you know, fascist.[8]

Wagner's influence on literature and philosophy is significant. Friedrich Nietzsche was a member of Wagner's inner circle during the early 1870s, and his first published work, The Birth of Tragedy

, proposed Wagner's music as the Dionysian "rebirth" of European culture in opposition to Apollonian rationalist "decadence". Nietzsche broke with Wagner following the first Bayreuth Festival, believing that Wagner's final phase represented a pandering to Christian pieties and a surrender to the new German Reich. Nietzsche expressed his displeasure with the later Wagner in "The Case of Wagner" and "Nietzsche contra Wagner".[9]

In the 20th century, W. H. Auden once called Wagner, "perhaps the greatest genius that ever lived", while Thomas Mann and Marcel Proust were heavily influenced by him and discussed Wagner in their novels. He is also discussed in some of the works of James Joyce. Wagnerian themes inhabit T. S. Eliot's The Waste Land, which contains lines from "Tristan und Isolde" and "Götterdämmerung", and Verlaine's poem on Parsifal.[10]

Many of Wagner's concepts, including his speculation about dreams, predated their investigation by Sigmund Freud. Wagner had publicly analysed the Oedipus myth before Freud was born in terms of its psychological significance, insisting that incestuous desires are natural and normal, and perceptively exhibiting the relationship between sexuality and anxiety. Georg Groddeck considered the Ring as the first manual of psychoanalysis.[11]