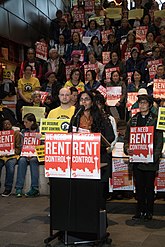 Rent control is a collection policies primarily centered around simple price control, specifically a price ceiling in rental real-estate, with the phrase most often referring to rental housing. Like most forms of market regulation, rent control in isolation can lead to a number of unintended consequences. While these consequences have long been established, proponents often gloss over them, either due to ignorance or political disingenuousness.

One counter-example to rent control exists in California, which has no state-level rent control but which caps real-estate appreciation (for the purpose of taxation) at a percent comparable to that applied to controlled rent increases. California Proposition 13, which passed in 1978, has led to a number of differences in California's housing market and the structure of its taxation when compared to other jurisdictions.

Prior to 2019, the policies differed in the following ways:

From a basic economic perspective, when the government does not pay for the construction of new housing, rent control can cause demand for housing to significantly exceed supply, and private landlords and developers of rent-controlled housing lose whatever market incentives they may have previously had. Rent control only achieves its stated goals when it is paired with significant public investment in housing. While various governments have invested in housing at different points in history, the most prominent contemporary example is Singapore.[1]

Historically, the United States, the United Kingdom, and the Soviet Union all built significant quantities of public housing immediately after World War II, but none of them sustained their initial public funding of housing construction and maintenance beyond the 1960s and 70s, and public housing either dramatically exceeded its planned lifespan (as with the Khrushchyovkas), or deteriorated so rapidly as to fall short of its planned lifespan (as with Pruitt-Igoe). The causes of this decline in publicly funded housing varied, from a shift in spending priorities to the Cold War military-industrial complex to a proxy backlash against desegregation and the American Civil Rights movement.

The analysis of rent control is among the best-understood issues in all of economics, and among economists, anyway — one of the least controversial. In 1992 a poll of the American Economic Association found 93 percent of its members agreeing that "a ceiling on rents reduced the quality and quantity of housing." Almost every freshman-level textbook contains a case study on rent control, using its known adverse side effects to illustrate the principles of supply and demand.[2]

Some economists go even further in their critiques. The Libertarian Frasier Institute cites Swedish economist Assar Lindbeck, describing rent control as "the most effective technique presently known to destroy a city – except for bombing."[3] Needless to say, people have strong opinions on the matter.

When rent control is applied on a per-unit basis (and not universally), tenants move less often than they might in an open housing market. For example, in New York City, which has had rent control longer and more stringently than any other major American city, the annual rate of turnover of apartments is less than half the national average, and the proportion of tenants who have lived in the same apartment for 20 years or more is more than double the national average.[4] This happens in part because a tenant might not be able to find a new apartment as affordable as the one where they currently live, and, because leases do not build equity, tenants are unable to transfer an increase in the value of their current apartment when moving to a new one.

Longer housing tenure is not inherently beneficial. A tenant might change jobs and end up with a significantly longer commute. A tenant might want to cohabitate with a partner or have children and find their current apartment too small. An empty nester might find themself in a far larger apartment than they need in an otherwise expensive housing market where they cannot legally sublet to other people who need somewhere to live. And, again, because a lease does not build equity, an empty nester cannot "cash out" the value of a too-large apartment in order to support themself in retirement. Otherwise expensive housing markets with significant rent control have smaller household sizes: in 2001, 49% of the San Francisco’s rent-controlled housing had only a single occupant,[5], while the 2010 US census showed that in Manhattan, where nearly half of all apartments are rent-stabilized, nearly 46% of all apartments had only a single occupant, compared to 27% nationwide.[6][7]

Even when governments do not directly subsidize individual homeownership, capping rent increases well below the rate of inflation will make private ownership of rental housing increasingly uneconomical, in many cases with such buildings converting to co-ops or condominiums. Under rent control from 1947 to 1977, in England and Wales privately built rental housing fell from being 61% of all housing in 1947 to being just 14% of all housing in 1977.[8] (This period of time, however, also coincided with an historic high in British government investment in council housing.) During 8 years of rent control in Washington during the 1970s, the number of rental units in the city declined from just over 199,000 units to under 176,000.[9] After rent control was introduced in Berkeley, California, the number of private rental housing units available to students at the university there declined by 31% in five years.[10]

Diamond, McQuade, and Qian (2018) finds that rent-controlled buildings in San Francisco were 8% more likely to convert to a condo than buildings in the control group. Relative to 1994 levels, the number of renters living in treated[What is this? Please elaborate.] buildings declined by 15% decline, and the the number of renters living in rent-controlled units declined by 25% reduction, due to the demolition and replacement or conversion of existing structures to owner-occupied housing. A 15% reduction in small multi-family rental housing likely contributed to the increase in the cost of rental housing in the long run, effectively subsidizing 1994 rental prices with these future increases.[What is this? Please elaborate.] Because California rent control allows whole-building condo redevelopment rather than only allowing co-op conversion with existing residents (as in New York), the reduction in the number of rent-controlled units in San Francisco correlated with an overall decline in housing affordability.[11]

The Cato Institute was horrified to find that, within 3 years of rent control being imposed on Toronto, Canada in 1976, 23% of all rental units in owner-occupied dwellings were withdrawn from the housing market, and that, even worse, within 5 years rent-controlled building fell in value by over 40%.[12] Rent control also decreases the contribution of landlords to the advertising market: according to The Times of London, the 1975 extension of rent control in England to covering furnished units led to a 75 percent reduction in advertising for those units in the London Evening Standard, compared to the previous year.[13]

When rent control encompasses an entire housing market, private construction of non-luxury housing becomes uneconomical. Nine years after the end of World War II, not a single new apartment had been built in Melbourne, Australia.[14] After the 1979 implementation of rent control in Santa Monica, California, building permits declined 90% over 5 years.[What is this? Please elaborate.][15] A study of rent control in various countries concluded: "New investment in private unsubsidised rental housing is essentially non-existent in all the European countries surveyed, except for luxury housing."[16]

In markets where the government does not pay for the construction of new housing, demand for housing can significantly exceed supply. Instead of housing units being rented to the prospective tenant willing to pay the highest rent, leases are effectively assigned by lottery or by more unscrupulous means such as (usually illegal) bribes. When faced with an array of economically indistinguishable tenants, a landlord may also be more inclined to resort to illegal discrimination on the basis of legally protected characteristics.

(Illegal extortion or racial discrimination by landlords aside, whether auctioning off limited resources or assigning them by lottery is a more fair and equitable system is an open philosophical question.)

When arbitrary rent increases are allowed between tenants, landlords have to negotiate ending a lease, which they may do by offering to "buy out" a lower-paying tenant or by illegally and passive-aggressively reducing the livability of the unit (i.e. by vandalizing it) or otherwise coercing a tenant into agreement.

The high cost of acquiring existing rent-stabilized buildings for demolition and replacement can lead to these buildings lasting longer than they would otherwise. A housing study in San Francisco in 2001 found that three quarters of its rent-controlled housing was more than 50 years old and 44 percent was more than 70 years old.[17] Likewise, in New York City, a significant portion of existing housing is still rent stabilized, despite rent stabilization only applying to buildings built before 1973. Whether that prewar apartment is charming, a nightmare, or both is, again, debatable.

Postwar Russia and other Communist countries invested heavily in reconstructing housing destroyed during the war, while also needing to accommodate rapid urbanization. The limited economies of these countries led this housing to be constructed as cheaply as possible, with a view to later reconstruction. In Russia, these buildings were known as Khrushchyovkas. As the economy of the Soviet Union became increasingly moribund during the 1970s and 80s, this ostensibly temporary housing long outlived its planned obsolescence, contributing to the stereotypical charmlessness of Soviet cities.

In Communist countries without the means, wherewithal or urbanization to construct mass public housing, such as Vietnam, the dearth of rent revenue has caused existing housing to deteriorate, as well:

"The Americans couldn’t destroy Hanoi, but we destroyed our city by very low rents and controls. We realized that it was stupid and that we must change policy," Vietnamese revolutionary, diplomat, and politician Nguyen Co Thach has said in a well known quote.[18]

Regardless of the inherent value of a building's age, in market-based housing where demand greatly exceeds supply, landlords increasingly lose the economic incentive for renovations or even routine maintenance, and obtaining repairs mandated by the housing code can require legal interventions, which many tenants may be unlikely to make. Buildings that do not convert to tenant ownership (as above) can gradually turn into dangerous (and unpleasant) tenement slums.

The increased cost of evicting tenants increases the cost of replacing existing residential buildings, and in cities with increasing populations, the high cost of redevelopment can contribute to urban sprawl. However, the same economics are at play with owner-occupied housing, such as, in the United States, predominantly owner-occupied single-family suburban tract houses.

Rent control can also correlate with commercial and industrial vacancies dramatically exceeding residential rates. A 2003 study in the United States found that despite extremely low residential vacancy, New York, San Francisco, and other cities with rent control had two-decade-high vacancy rate of 12% in buildings used by businesses and industry.[19]

In the absence of government subsidies, changes to zoning (such as increases in density or converting land use), as well as more cynically throwing environmental protections and housing regulations under the bus can increase the housing supply.[23] Houston, Texas, quite prominently does not have a land-use zoning code (though it does regulate development in other ways, in addition to covenants and deed restrictions), and housing in Houston is comparatively affordable,[24] which Reason Magazine thinks is incredibly compelling.[25] [Slate Magazine] has examined the effects of Houston's unique approach to urban planning and concluded that at least it hadn't contributed to hurricane vulnerability.[26] An earlier editor on this RationalWiki article also proposed reductions in housing demand by "eliminating housing benefits and reducing immigration," but concluded that "this likely wouldn't be necessary."[note 3] Whether being able to afford housing is a selling point for living a Neoliberal hellscape is, again, a value judgement left up to the reader.