From RationalWiki
(Redirected from Desegregation)
Jump to: navigation, search 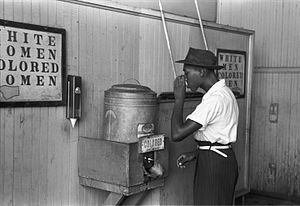 Segregation technically refers to any system of enforced separation between groups of people. In the United States, it usually refers to the system set up (de jure in the South, de facto in the North) that required African Americans and European Americans to stay separate as much as possible. They had to live, work, shop, eat, and drink separately, and even sit in different sections of public transit systems. The systems were ostensibly "separate but equal," a phrase now used to imply the subject isn't very equal at all.

In the South, this was enforced by lynch mobs and the force of law. Blacks were not allowed to attend the same schools as whites, and were sometimes always beaten or lynched for trying. In the North, the system was similar, but instead rested on the civil sphere to enforce it. For example, most banks and real estate companies would not consider helping an African American family move into a "white" neighborhood, a process known as redlining.

This then resulted in separate schools for the "races".

The system was, for the most part, destroyed during the civil rights movement. However, many cities in the US are still somewhat segregated in practice, although this is blamed on "tradition."[3]

See the main article on this topic: Apartheid

Under Apartheid, South Africa was ruled by a racist Caucasian minority (blame the far-right National Party). Worldwide pressure from college students broke the system in the late 1990s via divestment pressures.

For the Bible tells me so…[edit]

Prior to the Supreme Court decision on Brown v. Board of Education in 1954 that required desegregation of schools, most white Southerners probably did not give much thought to segregation, as it was just a way of life. If segregation was thought of at all by the deeply-Christian white southerners, it was probably an afterthought because the Protestant denominations in the South emphasized individual salvation as the solution to any collective sin.[4]:34-38 The Brown decision was viewed as a threat to the Southern way of life by many in the Deep South, but it also created schisms within Christianity, with national Protestant councils mostly supporting the Brown decision and many — but not all — local southern churches opposing it.[4]

Much of the sustained opposition to integration was championed by local preachers and lay religious leaders.[4] An important tool for these segregationists were religious tracts and other writings.[4]:79 These often contained what amounted to a "segregationist folk theology" that wove together Biblical literalism, political conservativism and segregation.[4]:80 Sections of the Bible there were included in the Curse of Ham, the Tower of Babel, Biblical exhortations for racial exclusivity for Israelites,[4]:80 Noah's curse on his grandson (Genesis 9:18-27), the curse on Canaan (Deuteronomy 7:1-6), and the abovementioned Acts 17:26 [4]:82-83

See the main article on this topic: Historical revisionism

Many American conservatives, particularly social conservatives, seem to be in a rather deep denial that in the U.S. the segregationists were right-wing. This has led to the common canard claiming that most of the segregationists were actually liberals because they were Democrats and that the political right was more supportive of civil rights, blatantly ignoring most of history in the process.

While most scholars don't consider this claim serious enough to even counter due to the sheer amount of evidence against it,[5] just for the fun of it here's the last half of leading segregationalist George Wallace's (in)famous 1964 speech "The Civil Rights Movement Fraud, Sham and Hoax," in which he announced himself as the presidential candidate on the American Independent Party ticket, a party formed by disaffected southern segregationalists who broke off from the Democratic Party:

And later in the speech:

Wallace, gaining the support of conservative Democrats, would go on to win a few states in the "Solid South". A legitimate source of confusion for this is that many business conservatives in the north and the liberal wing of the Republicans were much more supportive of civil rights, but this ignores that there's more than one kind of conservatism by conflating economic conservatism with social conservatism. Also, the "Big Six"

leaders of the civil rights movements were all quite left-leaning, and the liberal wing of the Democratic Party ultimately ended up shoving through civil rights; the New Deal Coalition fell apart soon afterwards.

For whatever reason this blatant historical revisionism is also popular among some libertarian circles on the Internet, though what they have to gain from it is a little uncertain. Oh, wait…