Rightpedia (en.rightpedia.info) was an extremist neo-Nazi, alt-right wiki created by ex-Metapedia sysops. Although Metapedia and Rightpedia were ideologically identical (white nationalist, pro-Hitler, racialist, anti-Semitic and Holocaust denialist), the difference was that Rightpedia doxed and contained defamatory articles on political opponents, such as liberals, socialists and members of the House of Commons. It was therefore similar to the far-right website Redwatch.

Rightpedia was taken offline by GoDaddy in November 2018, after take down requests were sent to their legal department, alleging the website hosted child abuse images.[1] For probably the same reasons, Web Archive also removed all traces of Rightpedia from their archives.[2]

Rightpedia was created sometime in 2015 by ex-Metapedia sysops Eleonóra Dubiczki (aka Fiala, Hu1, Vajna),[3] Michael Coombs (a.k.a. Mikemikev) and a fan of A. Wyatt Mann who were banned from Metapedia.[4][5] One of the reasons for the ban was the fact Dubiczki and Coombs were misusing the wiki to attack and smear political enemies. They were banned after complaints were made on the Nordisk web community portal (now offline) in November 2014 where owner of Metapedia Anders Lagerström posted (as Daniel F).[6]

Fiala was the main editor of the Hungarian Rightpedia. The English version was more popular with 88.12% of its total traffic, 36.8% of Rightpedia's traffic was from the USA.[7]

In 2018 the SPLC noted that the white nationalist co-founder of Rightpedia had created hundreds of sockpuppets on Wikipedia.[8] Mikemikev confirmed those accounts belonged to him.[9] 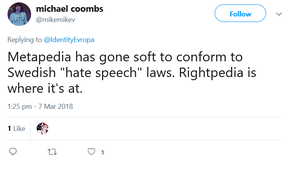 Rightpedia contained hundreds of racist and anti-Semitic articles, many of which attacked black and Jewish people. The website argued that sub-Saharan Africans have innately the lowest intelligence and compared them to gorillas.[11] They also described black people like animals:

The chief feature of a person of Subsaharan Africa is torturing with noise. Like with murder, any race has members of its population that do it, it just varies. However for blacks (and mestizos), 100% of their population tortures with noise guaranteed every chance they get. They do to their neighbors, even while they're all asleep by either leaving man-sized speakers going or by getting animals that make noise all night. They do it to people who hear their vehicles go by. They will amass somewhere away from home and do it to everyone near them. It is a 100% guarantee that blacks and mestizos will always torture with noise as much as they can. There is no other behavior so defining of these two races, so guaranteed of them, than this.[11]

Many articles on Rightpedia were strongly anti-Semitic, for example they described Jewish people as:

A fellow might get the impression that these jokers made a habit of psychological projection...

Metapedia became a Zionist shill run by Kimmo Alm (aka. Vir and Upplysning) who removed all mention of The Jewish Question from articles and simply made it about Marxism, hiding the Jewish source. Examples of changes Kimmo made have included using the pathological altruism claim to say white people made themselves cucks on their own, ignoring the Jewish intellectual movements that turned them into ethno-masochists. Kimmo also removed any revisionist narratives questioning historical propaganda of WWII and Metapedia now says The Holocaust™ actually happened where six million Jews were turned lampshades and soap. Metapedia also renamed the Red Holocaust article to a softer name and replace it with an article 90% smaller that specifically argues against Jews being the perpetrators of it. The site also removed the Star of David (✡) by names of Jews, as Metapedia has since been about hiding The Jew behind the destruction of Europeans and their culture. Granted some people write Jewish names (((like this))) instead of a star, but Metapedia didn't do that either.[13]

Rightpedia attacked Metapedia. The site claimed Metapedia was Marxist and a Zionist shill, as well as other claims that essentially amounted to “Metapedia isn’t bigoted enough”.[14]

Rightpedia was initially hosted by Orain, which refused to take it down due to their Terms of Service which supported freedom of speech.[15] However, Orain was closed down in September 2015 due to being hacked,[16][17] and Rightpedia moved to MW Zip before being deleted from there as well.[18] After that, they purchased hosting from GoDaddy.[19]

According to Google safe browsing analytics, Rightpedia was considered a dangerous domain.[7]

Rightpedia hosted defamatory articles on anti-fascists and politicians written by Michael Coombs and Eleonora Dubiczki. Coombs also targeted people he personally disliked and used Rightpedia to harass, by doxing them and writing libel. Coombs admitted Rightpedia's aim was to create "hit pieces" on its political opponents (such as liberals) and Jewish people. Dubiczki targeted politicians such as Diane Abbott and Luciana Berger.[20]

When hosted by Orain several of those libellous articles were removed for violating Orain's Terms of Service.[21]

Disturbing images of dead Palestinian children were put on Rightpedia's articles about (allegedly Jewish, of course) anti-fascists and liberal politicians to smear them.[22]