Based on idiosyncratic readings of the Declaration of Independence and Bill of Rights they believe that sovereign citizens are citizens of the United States by virtue of having been born in one of the 50 states, not including the District of Columbia, and have ostensibly revoked their US federal citizenship and "contracts" (a term of art used exclusively by sovereign citizens in this context), and filed a "quiet title". Actions to quiet title always relate to disputes about the ownership of real property and certain titled chattels, so the notion of quieting title to a human being is unknown to the law (or, well, it has been in the US since 1865). Sovereign citizens believe that they are not subject to any United States federal law, including being subject to the jurisdiction of federal courts, but are subject to natural law and common law. By contrast, Fourteenth Amendment citizens are subject to federal and common law, but can become sovereign citizens by taking the same action as sovereign citizens.

In the United States, the sovereign citizen movement is closely related to and/or descended from the Posse Comitatus and freemen on the land movements, and there is substantial overlap between these movements and militia movements. According to the Southern Poverty Law Center, the movement may have as many as 300,000 members.[2] In Canada, at least, there is an additional movement based around the concept of aboriginal heritage, which has been widely decried by Native Americans (First Nations people) and justices alike.

Though a few stateless people exist in the world (most in permanent diplomatic limbo due to lack of any citizenship), and in the United States a few have somewhat arcane legal status allowing them to be citizens of their place of residence (currently recognized only in American Samoa and Swains Island but not the U.S. at large), the idea that one can renounce one's citizenship in order to evade the laws of the land is unknown in all countries and U.S. courts have uniformly found this argument frivolous. 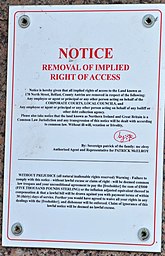 So, there is only one means by which these people could reasonably renounce their US citizenship without making a commitment to another country: applying at an embassy/diplomatic post (and this is without mentioning the hefty $2,350 processing fee[5] and any applicable exit tax for those who, among other things, are unable to file an IRS Form 8854 certifying they've been correctly paying their taxes for the past five years[6]). The Attorney General of the US has not created a process by which renunciations can be conducted on US soil. However, court precedent (Colon v. U.S. Department of State, 2 F.Supp.2d 43 (1998)) has affirmed that when you renounce your US citizenship, you don't get to keep your rights that you had when you were a US citizen. Namely, this means the right to enter the US, the right to live, work or study in the US without approval, vote in US elections or run for public office. Not to mention the fact that even if you renounce your citizenship, you can still be extradited to the United States if you committed a crime.[7]

The intellectual limitations for many members of the movement is indicated by the response of a Texas motorist to a December 4, 2008 traffic stop. "I am Texas Republican sovereignty. I do not recognize this as a legal traffic stop."[8]

If their misunderstanding of how citizenship within a state society works isn't enough, many sovereign citizens still receive and redeem government checks as well as other forms of federal financial aid. In short: money that's provided through taxes taken from other people which the sovereign citizens are opposed to. This is tacit admission (even if unintentional) that they are still subject to the government's authority and don't truly reject it.[13]

On a more practical level, many sovereign citizens are direct and willing beneficiaries of government largess. Ammon Bundy, the leader of an anti-government militia's take-over of a wildlife refuge, took out a $530,000 loan from the federal government in 2010.[14] Ammon's father, Cliven Bundy, almost certainly benefited from federally subsidized programs: like the $26.5 million annually given to ranchers for drought relief or the $22 million spent annually clearing predators from the federally owned grazing land that Bundy illegally used.[15]

According to a 2014 survey of law-enforcement personnel,[16] Sovereign Citizens were regarded as the number one terrorist threat in America. Lately, however, that has been overtaken by the alt-right. According to the FBI, sovereign citizens have been known to:[17]

Still in the early stages of trials against the arrestees in the 2021 U.S. Capitol riot in July 2021, one person so far has used a sovereign citizen legal strategy during her self-representation in court. Pauline Bauer was arrested for violent entry, disruptive conduct, and obstruction of Congress.[18] During the riot, Bauer allegedly threatened House Speaker Nancy Pelosi's life, saying, "bring Nancy Pelosi out here now… we want to hang that fucking bitch."[18] Bauer's sovereign citizen defense has so far included self-representation, claiming that she was exempt from US law due to ancestry in the US prior to 1776, threatening a court clerk with prison time, and using multiple peculiar spellings of her name in court filings.[18]

In 2013, two self-identified sovereign citizens were convicted "for their illegal actions associated with a militant anti-government group". Kenneth Wayne Leaming "was sentenced to eight years in prison for three counts of filing false liens against federal officials, and one count of harboring federal fugitives and being a felon in possession of firearms." and David Carroll Stephenson was "sentenced to 10 years in prison for a single count of filing false liens against a federal official."[19] In 2021, shortly after Leaming's release from prison, he made a legal filing attempting to join the lawsuit filed by Trump against Twitter and its CEO Jack Dorsey.[20] Leaming's filing used freeman-of-the-land terminology ("Kenneth-Wayne: Leaming", "Jack-Parick: Dorsey").[20]

Although populist anti-statism is associated with rural and small town whites in the American West, it has also appeared among African Americans who frequently refer to themselves as Moorish, Moorish-American nationals, or subjects of either Morocco or an entirely fictional "Moorish Republic".[21] Moorish sovereign groups generally believe that African Americans descended from the Moors and have special rights based on the 1780s Moroccan–American Treaty of Friendship,

but also that Moors are the actual aboriginal people of the Americas.[22]

The Rise of the Moors, possibly one of the most well-known Moorish sovcit organizations, began in the mid-1990s from the merging of sovereign citizen ideas with Moorish Science Temple, a religious group that was founded in 1913.[22] The group consists of African Americans and is a black nationalist organization. It often refers to itself as the Washitaw Nation, a cultural appropriation of the Ouachita people.

The Washitaw Nation was running a diploma mill at one point known as the City University of Los Angeles.[23] Other Moorish sovereign citizen groups exist who use similar logic, such as the Amexemnu City State,[24] but they are less known.

Like many other sovcit organizations, Moorish sovereign citizens have at times ignored US laws, loudly tried to deny or flout proceedings in court,[25] and previously engaged in violent crime and armed confrontations with police.[26][27][28] An act notoriously used by Moorish sovcits involves attempting to adversely possess

homes and property using false documentation and squatting. For example, the Atlanta Journal Constitution has described one such group as "paper terrorists" for squatting in foreclosed or for-sale homes in south DeKalb County.[29][30]