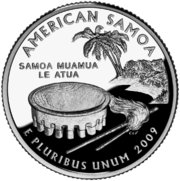 The South Pacific version of "In God We Trust".

American Samoa is the land of wrestlers and coconuts a group of five islands and three atolls in the Pacific Ocean that is administered by the United States. It is the only American territory that is in the southern hemisphere.[note 1] It is about 2,566 miles away from Hawaii, making it closer to the rest of the U.S. than Guam but still pretty far out there. It is currently split from the other side of Samoa

thanks to centuries old colonial disputes. Today, the people of American Samoa live under something between U.S. citizenship and being somewhat separate from the U.S..

Samoa was first inhabited by the Polynesians sometime between 1500-900BCE. According to legend, Samoa was a part of a large Polynesian empire that also included Fiji

American surveyors first reached Samoa in 1837. In 1855, German corporations began doing business in Samoa, starting large plantations growing coconuts, cacao, and rubber. This worried the British businesses, which led to their country intervening. Meanwhile, America officially set up shop in 1877 and made alliances with some of the local chieftans. This led to a period where Britain, Germany, and the U.S. were each competing for control over Samoa. This led to the Samoan Civil War

(1886-1894), which was largely a proxy war fought for control of the islands. After a second civil war (1898-1899), the disputes were resolved by the Tripartite Convention

. This also led to the end of the Samoan monarchy, as no Samoans were consulted during the drafting of the treaty.

After New Zealand took western Samoa from the Germans during WWI, a movement for independence known as the Mau movement

took hold in the Samoas; the U.S responded by imprisoning seventeen pro-independence chiefs. During WWII, there were more soldiers stationed there than civilians. While the western part of Samoa gained independence in 1962, American Samoa has been a part of the U.S. ever since.

American Samoa has the highest rate of military enlistment in the U.S.,[2] and it has a high percentage of fundamentalist Christians, with over one fourth of their population being Mormons[3] and also having significant Jehovah's Witness and Seventh-Day Adventist populations. Their motto, "Sāmoa Muamua Le Atua", translates to "Samoa, God is first". Even after Obergefell v. Hodges, gay marriage is still banned in American Samoa.[4] Naturally, this means that American Samoa is the friendliest to Republicans out of all the unincorporated U.S. territories. Both their governor and non-voting House delegate are Republicans.

Unlike other U.S. territories, American Samoans are not citizens upon U.S. birth, they are instead U.S. nationals. This means that they can't work in some government jobs and if they are charged with a felony, they can be barred from ever gaining U.S. citizenship. In December, 2019, a district judge ruled this as unconstitutional per the Fourteenth Amendment, but stayed the order.[5] This unique status also means that any foreign immigrants who move to American Samoa will be unable to apply for U.S. citizenship.

In 2020, Mike Bloomberg spent half a billion dollars to win only American Samoa. American Samoa also gave Tulsi Gabbard, who incidentally was born there, her only second place finish.

It is illegal to own land in American Samoa unless your blood is at least one half Samoan. Currently, the U.S. is locked in a territorial dispute with Tokelau

, which is currently administered under American Samoa.