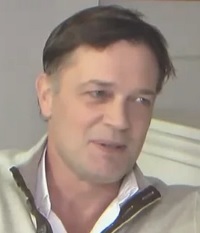 Andrew Wakefield is a disgraced British former physician[2] and medical researcher and is one of the originators of the modern anti-vaccine movement. He is best known for his fraudulent study alleging a link between the measles-mumps-rubella (MMR) vaccine and autism. Once the massive methodological and ethical flaws in this paper came to light, The Lancet retracted it.

He and his paper are a major hit to humanity, spawning a vast number of stupid and evil minions bent on destroying the world. The MMR vaccine controversy has been referred to as "the most damaging medical hoax of the last 100 years",[3] and the modern anti-vaccination movement it has created is considered by World Health Organization to be one of the top 10 threats, alongside air pollution and climate change.[4]

In 1993, in a similar fashion to the MMR-Autism link, he was working at the liver transplant center at Royal Free Hospital when he observed a relationship between measles and Crohn's disease and then did research on a link between the MMR vaccine and Crohn's disease. He then published his research in the Journal of Medical Virology. [5] Other researchers have failed to reproduce his results, so the research is generally discounted by most physicians. [6]

In 1998, Wakefield wrote a paper (co-authored by 12 other scientists) on a dozen autistic children who had been admitted for bowel problems. The paper claimed that eight of the children developed both irritable bowel syndrome and behavioral regression within 14 days of receiving the MMR shot. This suggested a link between the vaccination and the regression.[7] Although he never specifically claimed that MMR caused autism in these cases, he did campaign for the triple-dose to be discontinued until it could be further studied, saying "I can't support the continued use of these three vaccines given in combination until this issue has been resolved."[8] His stance at the time was similar to the "Too Many, Too Soon" refrain currently popular among anti-vaccine advocates.[9]

By 2004, new allegations were surfacing that called Wakefield's objectivity into question. Investigative journalist Brian Deer uncovered evidence that suggested that Wakefield was receiving money (over £400 000, or $500,000 in US dollars) from trial lawyers while he was writing his study. Given that the study set off several lawsuits, this indicated a serious (and undisclosed) conflict of interest.[10]

It was also found that in 1997, one year before he published his study, Wakefield patented a cure for “autistic enterocolitis”, the fake disease he claims causes autism through the MMR vaccine, remove toxins, and immunize against measles.[11] Due to this, he stood to gain from the removal of the MMR vaccine by selling the separate measles vaccine.

Of course, just because Wakefield behaved unethically doesn't necessarily mean that the study was false. While the study was always suspect due to its tiny sample size and lack of good follow-up studies, evidence that it was outright false did not surface until 2009.

An investigation into the study revealed that some of the information that Wakefield used was different from the information found in the medical records of the subjects. While Wakefield had claimed that the behavioral regression had started within 14 days of vaccination, the actual records indicated that this was not true for most of the children, and some of them had already shown signs of regression before receiving the shot.[12] For example, the parent of child 11 said that the boy's developmental delays had started at age 13 months, while the paper claimed they started at age 15 months.[13]

As a result of the growing concern over Wakefield's ethical lapses and possibly fraudulent behavior, The Lancet formally retracted the study in February 2010.[14]

In 2007, the General Medical Council began investigations into Wakefield's conduct. Among the charges against Wakefield were allegations that he paid for subjects and lab specimens (notably an incident where he obtained blood samples from children at his son's birthday party) and that he ordered unnecessary and painful procedures for children whose symptoms did not warrant them.[15] In 2010, the disciplinary committee ruled that Wakefield had deliberately misled his patients and ignored their personal interests in favor of his own. Wakefield was struck off the British medical register and is no longer allowed to practice medicine in Britain (or presumably anywhere else).[2][16]

Wakefield still commonly claims the title "Dr." (his degree has not been withdrawn by Imperial College) and the initials "FRCS"[17] (Fellow of the Royal College of Surgeons). The latter is something he is not entitled to[18] — he stopped paying his membership dues in July 1996 (before the famous paper) and so has not been a FRCS since that date.

Wakefield moved to Texas and in 2005 started "Thoughtful House" which claims to be able to treat autism. After Wakefield's highly public defrocking, he stepped down from the head of Thoughtful House and moved on to start the Strategic Autism Initiative which, at the moment, appears to be little more than a fundraising shell.

In 2003, the UK TV network Five aired Hear the Silence, a drama based on the Wakefield saga, with Wakefield being played by Hugh Bonneville.[19] Film critic Mark Lawson said that Wakefield and his position on MMR had been portrayed very sympathetically:

Following the broadcast on Five, there was an on-air panel discussion about the production and the issues of MMR and Wakefield. A number of autism and vaccination experts who were invited to appear turned down the offer.[21]

In 2013, Hear the Silence did the rounds on the usual alternative medicine sites like NaturalNews and mercola.com.

In early 2011, the BMJ (the direct competitor to The Lancet) published an article in which it was proved that Wakefield's findings weren't based on mistakes and sloppy data but, rather, on fraud.[22] The paper begins with the damning sentence:

It goes on to say:

Unfortunately, even in the face of this overwhelming evidence, at least two idiots are determined to press on with their claims of a link between the vaccine and autism.[23]

Wakefield's medical ambitions having been stifled, he is now appearing as a speaker at conspiracy crank events,[24] as well as being the patron saint of anti-vaxxers everywhere.[25][26] He appears at the hellhole known as Autism One[27][28] where parents learn to torture their poor autistic kids using chelation,[29] bleach,[30] detox,[29] chemical castration,[27] and pretty much every single autism biomed woo in the world. His influence over anti-vaxxers still holds to this day even though over 100 studies disprove the link between autism and vaccines.[31] Some people even go so far as to call the antivaccine movement a cult[32][33] which is an understatement.

In January 2012, Wakefield filed a defamation suit against Brian Deer, the British Medical Journal, and the BMJ's editor Fiona Godlee personally.[17] The BMJ Group has noted that they stand by their article (and pointedly call him "Mr. Wakefield" throughout the press release to this effect). This suit was dismissed on jurisdictional grounds.[34]

In 2016, the film Vaxxed: From Cover-Up to Catastrophe, promoting the CDC cover-up manufactroversy was announced to be screened at the Tribeca Film Festival in New York City. The film was directed and co-written by Wakefield. Actor Robert De Niro, one of the festival's founders, initially defended the screening of the film, stating, "We believe it is critical that all of the issues surrounding the causes of autism be openly discussed and examined."[35] However, days later he backflipped on permitting the screening and pulled it, saying, "My intent in screening this film was to provide an opportunity for conversation around an issue that is deeply personal to me and my family. But after reviewing it over the past few days with the Tribeca Film Festival team and others from the scientific community, we do not believe it contributes to or furthers the discussion I had hoped for."[36][37]

Many anti-vaxxers like to claim that there is a Big Pharma conspiracy to discredit Wakefield. However, in reality there is good evidence that "Big Pharma" was actually funding him until it became clear that his "research" and claims were questionable. "Deer has uncovered evidence showing that until questions arose about the validity of his research, Wakefield actually had support from such drug-industry giants as Johnson & Johnson, Merck and SmithKline Beecham. And, on at least one occasion, Axcan Pharma Inc. paid for his first-class trans-Atlantic airfare."[39]

The Strategic Autism Initiative (SAI) is an organization created to "do the science on the environmental causes of autism that the federal agencies want to run away from."[40] It was started by Andrew Wakefield.

Ousted from his medical career in England, Wakefield moved to Texas and ingratiated himself with Jenny McCarthy's anti-vaccination propaganda house Generation Rescue. Using this connection, he established Thoughtful House, which claims to be able to treat autism. After Wakefield's highly public defrocking, he stepped down from the head of Thoughtful House; this Strategic Autism Initiative appears to be the new fundraising front for his efforts to fleece[41] parents with autistic children. Generation Rescue still seems to be the major source for publishing and pushing for funds.[42]