From RationalWiki
Jump to navigation Jump to search
Indiana 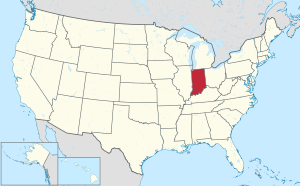 Considering its location, you could say Indiana is the crossroad of America.

Check it out - racecars!!!
Ironically, auto racing and crossroads are a poor mix.

Indiana is a corn-growing state in the upper midwestern United States. The residents are known as Hoosiers. It is sometimes referred to as "The Midwest's South".

As an American laboratory of privatization[edit]

The Indiana Toll Road is what the British would call a "motorway" and what Germans would call an "autobahn." Many Americans would call it a "freeway", but that would be technically incorrect since you must pay a toll to drive on it. The Toll Road is part of a network of toll roads that runs from the South Side of Chicago, Illinois to Boston, Massachusetts. The highway, which predates President Eisenhower's Interstate Highway system, was incorporated into that system rather than build nearby parallel freeways. (The route of Interstate 90 was overlaid onto the entire route of the Toll Road. Interstate 80 also overlays the Toll Road from Lake Station to the Ohio state line.)

In 2006, thanks to the eternal hard-on for privatization that seems to afflict all Republicans and too many Democrats, Governor Mitch Daniels and the GOP-led statehouse leased the publicly owned Toll Road to two foreign companies that specialize in operating toll roads -- Macquarie Group of Australia and Cintra of Spain. Between 2006 and 2011, the toll on the Toll Road -- which hadn't increased by so much as a penny since the 1980s -- doubled, with most of the increase going to the foreign investors. According to the Huffington Post, the lease agreement allows Macquarie and Cintra to "raise the toll annually at one of three rates -- at a flat two percent, at the percentage increase in the consumer price index or at the percentage increase in gross domestic product -- whichever is highest." [3] The lease will expire in 2081; however, the current operator has gone into bankruptcy, and plans to sell off the lease to pay off its debts.[4]

Indiana is an unusually red state, given its location in the traditionally purple Midwest. Even Bill Clinton failed to carry the state in either of his two elections, despite winning every other Great Lakes state as well as winning much of the American south. From 1940 through 2020, Indiana would only vote Democratic twice- in LBJ's 1964 landslide over Barry Goldwater and in 2008, when the severity of the financial crisis in the region, propelled Barack Obama to score a very narrow[note 2] upset win over John McCain. Considering how the GOP has increased their strength in the Midwest, making states like Iowa and Ohio safe pickups, Indiana in many ways just foreshadowed a trend.

In perfect respect to the Establishment Clause, Indiana sells license plates with the words "In God We Trust" as part of the design, because apparently none of the Christians involved in that decision had ever read Matthew 6:1, 5-8. Interestingly, this alleged trust in God does not prevent most of the drivers from driving five miles under the speed limit.[note 3] Indiana highways would generally be much safer if they had broader shoulders as in neighboring Michigan and Ohio even without the promotion of religious faith.