Welcome to the Dollhouse, Barbara! human

I think that you might be better off looking here. --מְתֻרְגְּמָן שְׁלֹום

Did you move "naked" to that really silly new title? And, why? See my comments on its talk page... That move makes no sense that I can see, maybe you can shed some light on it for me? human

Just to revert to the native tongue - I'll try to explain my meagre command of German. I learned it at school in the 50s, in Austria in 1960 (2 months with lower aristocracy@ Melk on the Donau & in Wien) & 2 years on & off 1966-8 working around München. Back when I learnt it, "du" was only for family & close friends, specially in Austria which still had relics of a Austro-Hungarian past. They also had words/phrases & pronunciations which marked me down as a deepwoodsman (can't remember the German): ja -> jo, Grüss Gott, Servos, uzw. But always "Sie" - almost until you'd slept under the same duvet (which they had back then of course) I've almost never used it since. SusanPurrrrrrr 09:30, 26 January 2008 (EST)

I noticed your interesting work on Sex, and I think there are another couple of articles that could do with a bit of anti-Catholic ranting: Water, Trade union, Physics. I hope you'll get on this as soon as possible. Thanks for your time. --AKjeldsenGodspeed! 07:18, 27 January 2008 (EST)

Heh! Heh! Now, now, Ak! If there's anyone should be able to take a bit of ranting it should be the Papists - second only to die Juden. Leave a good ole protestant her anti-cat diatribes. SusanPurrrrrrr 11:40, 27 January 2008 (EST)

But can you at least keep it factual and not generally inflammatory? The article called "Sex abuse by religious people" just got deleted, for this reason: "it is a hit piece that makes blanket statements about huge groups of people." You didn't cover the subject, you just ripped on Catholics. Maybe you have issues with the RCC, but please, as you write, try to write well, not just write hate pieces.

PS, copying talk:Sex abuse by religious people to here so it's not lost. human

copied from talk as mentioned above[edit]

I should look up some stuff on the widespread institutional abuse in the residentital school system in Canada, back in the 50's, I believe. Horrifying stuff. --Kels 11:17, 2 February 2008 (EST)

This seems disturbingly reminiscent of many of the hit pieces on Conservapedia… It sort of appears to exist simply to attack a faction. --Linus(plot evil tech) 16:42, 2 February 2008 (EST)

Agreed. There's a legitimate story to be told about the cover ups, and a grim-as-fuck article to be written about child protection in general, but this needs nuking. Children aren’t safe with Roman Catholic priests?! Einfach furchtbar. --Robledo 17:29, 2 February 2008 (EST)

I agree. Terminate with extreme prejudice. I added the "delete" template. The nun instance is backed up by one example, and proposes guesses as possible fact. While I agree that there is a topic here (and maybe should be a carefully documented section of child sexual abuse, this article is just a bit "over the line". Hopefully Barbara will chime in before her worked vanishes... human

Despite my comment above, I'm in agreement. While an article mentioning the problems that face institutional Catholicism and the many cover-ups, I wouldn't say every Catholic, or every priest, is untrustworthy. That's taking things a bit far. --Kels 17:51, 2 February 2008 (EST)

There seem to be a whole series of articles connected here, and I've been whitewashin' 'em. I added a bit about the scandals to celibacy, although not much. Oh well. Anyway, if no one else does, I'll probably put this article on a scaffold and yank the trapdoor release after I put my hood on later tonight. Shame to delete this awezome comment, though. So I'll copy the good part to template talk:delete! human

Yeah, but I copied my moment of linguistic glory to another place. And, Kels, you are partnered and too far away, don't ease me! I'm an old man. human

I smell an agenda here. Merge with 'sex abuse' or I'm pulling the whole 'liberal deceit -> conservative deceit trick from CP. I hate Nietsche with a passion, but something about being careful while fighting monsters seems appropriate here. --מְתֻרְגְּמָן שְׁלֹום

Do you mind, um, splainin' what you just said? Or was it just supposed to be teh lulz? human

Well, whenever I see a 'liberal X' article on CP, I make a 'conservative X' article, which is exactly the same, but with the words switched round, in order to . I was thinking of doing the same here; creating an article that was an exact mirror of this one, except had all religious references and citations switched to non-religious ones, and then draw the conclusion that you can't leave children around with atheist leaders. The monsters quote is this:

'He who fights with monsters should look to it that he himself does not become a monster.'

I have done the same thing, many times (make a "liberals are assholes too" article). But I still don't understand what you are saying? human

Whoops, sorry, read you wrong. You were talking about CP. I wuz talkin' about RW. Never mind... human

I was beginning to think that you had a reduced sense of ridiculosity. then you did the stilton & the re-redirect. :) Susanpurrrrr 16:48, 6 March 2008 (EST)

You might want to check out this help file: Help:Refs - I think I noticed a few places where you meant to get this sort of result, but sort of did it manually. human 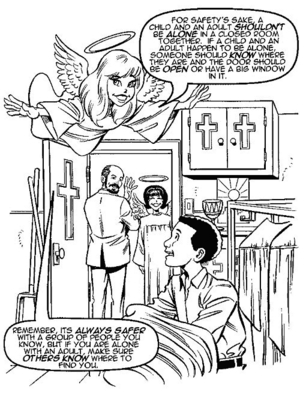 Yes, it's funny. Yes it exposes hypocrisy and corruption among Christian organisations. Please don't give me any more. People will think I want paedophile material on my user page. On this web site users get blocked for removing unwanted material from their talk pages. I've seen more now. It's from Newsweek. It's meant to be informative. Ye3s. I do want more of that, sorry. Barbara Shack 04:44, 11 March 2008 (EDT)

I don't think anyone's been blocked for removing stuff from their talk page who didn't deserve it for an accumulation of reasons. It's just that we've got an esoteric (?) sense of humour here. This is the first wiki I joined (& the second, after cop I'd looked at) so I might be a tad biased but I think the folk here are, by & large, loverly. Susanpurrrrr 10:03, 11 March 2008 (EDT)

Barbara, I'm sorry that you feel that you've been humiliated. I have certainly appreciated your contributions, even if others haven't. RW isn't like many other wikis as there is a lot of lulz that has developed between a small group of people and newcomers can easily get the wrong impression. (That's why I reverted your edit of TMTamesP user page.) There is quite a wide age-range so puerile humour spans from about 14 to 60. You haven't specified an email address but please feel free to email me if you have any issues. I see from your WP page you live in Brum, I went to school at KES Edgbaston, but a long time ago.

Barbara, I appreciate you concern over blocking. Despite what you may think there is relatively little serious blocking done at RW. Vandals are usually only blocked for a short period until they get bored. Some IPs are blocked because it is often easy to get logged out and then you find that you have given out an IP address which may identify you. If you have edited at work this could be a source of some embarassment. I have blocked many IP addresses at user request so that they have to log back in if they either forget to log in or are disconnected. The blocks are for anonymous IPs only, the user is free to edit if they log in, so it is not an ideological block or some sort of punishment.

Barbara, just a tip. If you use Firefox you can install a spelling checker which works as you type.

Barbara it would help when posting CP madness if you actually linked to the diffs. That is done by going to the page history and clicking the radio button before someone's entry and then the one for their entry, clicking "Compare selected versions" then shows exactly what has been added or removed. If someone makes several edits in a row then you can show the diff over several edits.

Is it part and parcel of being an atheist to reuse all Dawkins/Hitchens talking points? If thats the case, then I'm a fundie Christian! MarcusCicero 09:31, 25 March 2008 (EDT)