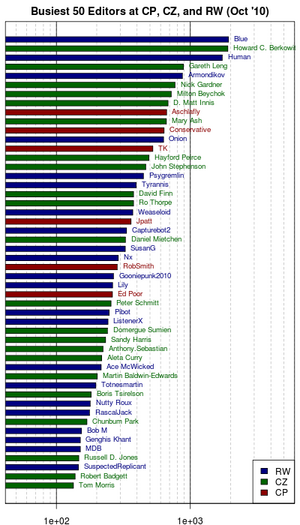 This is where I remember your name from!

Yes, Howard you both gave me a good run for my money last month! ħuman

I see you've made some CZ links and asked if they are appropriate. First of all, we don't usually go for in-line links in articles. We tend to write our own stuff and put the links in references at the bottom. Secondly whether everyone here would regard CZ as a reliable or appropriate source is another question. For reference we don't usually even link to wikipedia.--BobSpring is sprung! 20:39, 8 January 2011 (UTC)

I don't think this is true, or, at least, was not widely considered true.

I believe this was generally taken to apply to approvals of new versions, meaning Ullman could veto any version he disliked. In any case, the article was approved on every occasion by homeopath vote, and the draft was never allowed to develop away from anything not pro-homeopathy for long enough that it ever could have been approved in a different form, so this is very much a theoretical objection, not a real one. Aconite (talk) 19:55, 11 January 2011 (UTC)

While I personally would have liked to have seen a stronger debunking, that's unlikely within the current usage of neutrality policy. Gareth Lang and Sandy Harris, however did substantial rewrites taking things away from the homeopaths, so I will say that the locked article with a moratorium is about the best we can do under current conditions. I think my comments will show I'm strongly anti-homeopathy, no matter how much Ullman complains.
To the best of my knowledge, Ullman is not licensed to practice any healing discipline. Howard C. Berkowitz (talk) 20:01, 11 January 2011 (UTC)

Oh, I agree with you the current article is reasonable enough given the situation; but remember that as soon as the draft used for it now was done, Ullman began editing it back into a pro-homeopathy piece. Hence why it had to be done by EC fiat: There was no period where the draft remained anywhere near a neutral treatment, as opposed to a pro-homeopathy treatment, for any length of time, which I believe was at least an obstacle to ever gettinhg anything approved except by higher power; especially with Sanger praising the article in the press. Aconite (talk) 22:52, 11 January 2011 (UTC)

It was pleasant enough to see mention here of Ullman grasping at straws, given that when he's in medium-level condescending mode, he is apt to call any counterargument a "strawman". I had suggested a Wicker Man alternative, but he didn't respond. Howard C. Berkowitz (talk) 00:40, 12 January 2011 (UTC)

Hey, I hate to be a pain, but I found a problem when going through the approved Citizendium articles.

This image is used as part of this montage, however, nowhere on Citizendium is the author, Mike Murphy, credited - as is required under the terms of the licence. Not even on http://en.citizendium.org/wiki/Image:Mariposa_Grove_Squoias.JPG

By the way, I'd also seriously question whether you could use http://en.citizendium.org/wiki/Image:Daphnia_pulex.png in a montage without crediting the author explicitly on the image description page for the montage. Aconite (talk) 06:59, 15 January 2011 (UTC)

Finally, http://en.citizendium.org/wiki/Image_talk:KildLaughing.jpg - after three years, I think that it's time to decide it's not going t be brought into line with Citizendium's rather ridiculous "people we want to use the work of have to follow our real name policy too" policy. I think I once heard that was to prevent copyvio. I will refrain from snarky commentary. Aconite (talk) 07:04, 15 January 2011 (UTC)

Let me see what I can find out. I haven't had anything to do with these particular articles or images. Would you mind if I simply posted this to the Forum, so people who have worked on them, if they are still around, can correct them? Howard C. Berkowitz (talk) 05:58, 16 January 2011 (UTC)

Really, Howard. You should know better than this. I realise that most of the problems are simple failure to understand the issues, but the entire last paragraph fails to understand the nature of a meta-analysis, and the rules for conducting one; and sourcing information from Homeopathy? Aconite (talk) 13:31, 19 January 2011 (UTC)

While my name shows in the edit history, I did not actually write the content in this article. As I remember, I did it to help out the rewrite of the main article, which was taking out controversial pieces and putting them in subarticles -- it was text I was asked to move and my concern was getting it out of the main. It appears this never was touched after it moved. Let me look into this. Howard C. Berkowitz (talk) 13:50, 19 January 2011 (UTC)

Right-o. I did think you were better than that. I'd suggest that it may as well be deleted, since it's redundant to articles like "Tests of homeopathy" (a pretty terrible article, which already contains pooh-poohing of Shang).

By the way, if you're wondering what brought this up; basically, I noticed the Citizendium article here was criticising Citizendium for things dated to 2007, 2009, and so on. While it's reasonable to cover a couple of those to show Citizendium's history, I wanted any criticism to be primarily for things that were new or relatively recent. So I reviewed everything, made a new section for anything that was only historically bad (and kept that to only particularly relevant examples), and then checked to see if there were still similar articles to find.
Alas, the answer to that last was a resounding "YES!" See http://en.citizendium.org/wiki/Qigong or http://en.citizendium.org/wiki/Reiki Aconite (talk) 14:07, 19 January 2011 (UTC)

Ironically, I sometimes find it very hard to get sanity checks on articles that I've written, not all of which are extremely technical. Yes, I can understand why some people were simply squeamish about http://en.citizendium.org/wiki/torture. If you start with Interrogation (and extrajudicial detention) and work down through a hierarchy of Related Articles, you'll wind up with specific, heavily sourced articles on specifics of policy in the Bush Administration.

In other words, it's hard to get help in making a good article better. I'm very proud of the Wars of Vietnam series, because, in the opinion of several people, it's a real start on an example of what "original synthesis" might look like.

The fringy things, however, get much more interest. I was specifically asked, by Matt Innis, to clean up the Apollo Moon Landing Hoax, but, after removing about 75% of nonsense or Russian references I could not check, I started writing articles to say how things (e.g., electro-optical tracking) actually did work, as opposed to how the moonbats thought they did. Radar jamming from a submerged submarine?

IME on Wikipedia, you never get the help you want, you get the "help" you get. Usually it takes wrangling adversarially (with whatever level of decorum) to kick an article up to the next level. Yay working with people! - David Gerard (talk) 12:24, 22 January 2011 (UTC)

I just gave you back sysop rights at RW. Not much consolation for a block at CZ I guess, but whatever. Please remember to sign your posts. Weaseloid

Thanks; I appreciate the thought. I'm surprising myself, as I'm not especially upset. The irony was that a reasonable consensus was just starting to emerge in my non-Trial, with Hayford the only loud objector. Howard C. Berkowitz (talk) 14:21, 21 May 2011 (UTC)

Some BoN dropped this on my talk page but it was you who made the post.

Was reading Unidentified Flying Object today and there is a line that I can't make heads nor tails of, and I think according to the fossil record it's you who added it. Here's the line:

From the National Photo-Interpretation Center (NPIC), Condon's group was allowed access to classified material through the collateral SECRET level, a relatively low leve for inteligence ,ateroa;. Information was provided under the rules:

Does the 'ateroa' mean anything or is it just keysmash from basement cat? Figured I'd leave it for you to sort out. Cheers o/

I assume the mash up was meant to be "criteria".

ГенгисOur ignorance is God; what we know is science.