Vaccination Information Network (VINE) is a rabid anti-vaccination organization, dedicated to science denialism[2], quackery[3], and conspiracy theories[4]. They have first started as a Facebook page, but apparently has enough presence to be established as a separate website. Their Facebook page has over 145k likes and over 136k followers, so they're apparently influential enough.[5] They push usual PRATTs related to anti-vaccination, so get out your anti-vaccine argument bingo card and start checking off. They may even offer new bonus points to add from their special "What sorts of shitty questions should I ask my bullying doctor?" section.[6]

Vaccination Information Network (VINE) originally started as a Facebook page, where it grew into arguably Facebook's most popular source of reliable vaccination information.

As with many other unbiased vaccination organisations, VINE has also been under attack from Big Pharma, with censorship restrictions occasionally being enforced by Facebook.

The VINE website has been created in order to allow the public unrestricted access to the full range of vaccination information, including articles and videos. 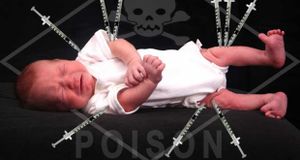 This image sums up the site's tastes in aesthetics pretty nicely.

Within the website, there is constant stream of images of upset babies being vaccinated, and the site is very fascinated with the human skull. There is a meme of a skeleton with big bold text proclaiming "poison for profit"[7]. There is an image of a giant syringe with a droplet that has a cartoon skull etched inside.[8] There is an image, from NaturalNews, of the word "autism" insidiously revealed behind a yellowed and decrepit CDC logo.[9] Thankfully, a lot of videos they post seem to be broken. Even the featured video at the bottom of the site is broken.

Typical crap on this page reads "by far the most common letter or post sent into us, is the latest pro vax article going viral.... with people asking for a rebuttal...... the current one is 'dear parents, you are being lied to...'". They claim that "vaccines have never protected anyone or saved anyone’s life",[7] which is an outright lie,[10] and they don't even bother to support that claim with anything, not even an internal link. The site is, not surprisingly, illiterate in their chemistry, by using the classic argument by vaccine package insert[11] by using a source from Center of Disease Control and Prevention to then say how toxic vaccines are because they contain trace amounts of certain substances. They apparently trust the CDC enough when it comes to believing about toxic substances, but the CDC itself states that the substances are safe at the dose they are administered.[12] They hosted an opinion from Dr. Robert S Mendelsohn, who wrote a book about raising a healthy child in spite of that pesky doctor. Among his opinions? Measles aren't that bad.[13] Someone has measles? That person just needs a lot of rest, fluids, and calamine lotion/cornstarch baths because measles are just like a mild cold. While also denying that the measles vaccine works (all while confusing mortality with morbidity rates, business as usual), Mendelsohn also outright denies the risk of permanent blindness from measles. He is wrong.[14][15] Tacked on are additional opinions from other people also unfit to offer medical advice, Hilary Butler (an antivaxxer parent with a proclivity towards inappropriate Nazi analogies)[16] and Viera Scheibner (a geologist).[17] Hilary Butler thinks liver-cod oil and Vitamin A will cure measles somehow and also thinks the measles vaccines didn't save us because people still get measles and that deaths from measles (mortality) NOT measles incidences (morbidity) which vaccines have destroyed, were declining and rare before the vaccine was administered.

Despite not understanding dose makes the poison, they still promote homeopathy.[18] They also characterize vaccines as a "fraudulent, disproven and obsolete medical (mal-)practice from the dark ages of medicine." while hailing homeopathy as "a beneficial form of healing which holds great promise for the future, especially as it is a healing system which has been shown to be able to alleviate and in some cases reverse the wide-spread harm and disasters caused by vaccinations." If homeopathy actually works, surely they should advocate increasing the concentration of the toxic chemicals they hate so much? Also, because Samuel Hahnemann and John D. Rockfeller, who took advice from homeopathic doctors, lived to old ages, this means homeopathy works.

Because the CDC was involved in an alleged coverup of a link between vaccines and autism (hint: the entire thing is overblown and there is no coverup),[19] and because the CDC is just like the Tuskegee syphilis experiments by giving minorities vaccinations without their consent in South Central Los Angeles, in the late 80's-early 90's, this means CDC thinks Black Lives Don't Matter.[20]

See the main article on this topic: Crank magnetism

Vaccination Information Network contains an image by David Dees of a Fascist Anarchist Communist fluoride tank, almost bursting with every derogatory buzzword the skull of truth can drink, underneath some chemtrails.

Uniquely, they do not support Donald Trump. Instead, they have hosted an equally-incoherent post,[23] by "Jack", proclaiming, in several all-caps paragraphs and forty different embedded videos, that Trump is a "Clinton plant". Taking a page from Lyndon LaRouche, both Trump and Hillary Clinton are just puppets of, you guessed it, British politicians, with a few dabs of vague anti-Semitism thrown in. Specifically, the two are controlled by the Council of Foreign Relations (who aren't British), who in turn are in control of the Royal Institute of International Affairs (who are indeed British), who are the mere agents of Queen Elizabeth II, all working together to destroy the United States. Even the whistle-blower Alex Jones is sadly clueless. There is at least some self-awareness sprinkled in there ("If you don’t understand what I’m talking about, (most don’t)").

They have also hosted a piece, published in September 2017, that purportedly links water fluoridation to lower IQ scores.[24] If they more carefully read the paper, the paper specifically talks about populations with high exposures, and it has several limitations (including but not limited to small sample size, being only an observational study, no mention of confounding factors such as arsenic information, no data of actual fluoride count consumed by participants).[25] Being unable to resist a Nazi jab (which hopefully won't cause autism), the article includes a graphic of a fluoride tank with a hakenkreuz.

How any of this pertains to vaccine information, it's anyone's guess.