From RationalWiki
(Redirected from Obamunism)
Jump to: navigation, search 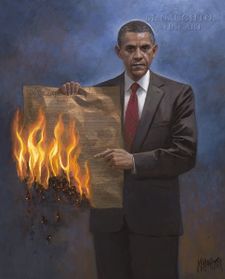 Soetoro declares his new socialist government by burning the US Constitution, 2009.

Obamunism is a communist ideology the former form of government in the United States of Socialist America (USSA, formerly known as God's Own Country). It was instituted by Muslim Sultan B. HUSSEIN Obama Soetoro following his usurpation of the American government in 2009, and ended with the Donald J. Trump's Great Triumph™ of the American Will

over Shillary Clinton in the 2016 fight to the death presidential election. Deus vult!

People CLAIM Obamunism is a centrist ideology, but it is obvious that all leftist liberal pinko members of the Democrat Party and "moderate" Republicans are closet Obamunists.

Philosophical roots and the young Soetoro[edit]

Barry Soetoro was simultaneously born in Hawaii, Kenya, Indonesia and Mekka, leading many scholars to believe that he is in fact an interdimensional shape-shifting Reptoid. He's also related to Malcolm X somehow. He received his education in a madrassa that preached radical Islamofascism. This, along with his heavy substance abuse during his teenage years, allowed for subsequent Marxist indoctrination by his college professors.

During his college days, Soetoro began to build up his notorious culture of secrecy surrounding him. Because of his obvious lack of intelligence and eloquence, it's clear that he refuses to release documentation such as his college transcripts because he made his way through college by cheating and leveraging favoritism among his professors. He later engaged in radical activism with well-known CommuNazi William Ayers. Ayers also ghostwrote Soetoro's books, further illustrating his lack of intelligence. In his post-college days, he worked as a "community organizer," which is suspiciously close to "communist organizer."

Communist activity and hatred of capitalism[edit] 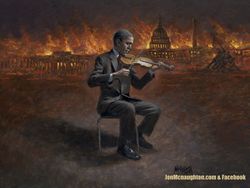 Obama fiddles during the Great Fire of Washington, 2013. What, don't remember that?

Obamunist ideology espouses an extreme anti-capitalistic mentality. This has allowed Soetoro to consolidate power with his promises of bread and circuses to the indolent welfare queens of the USSA, like the socialist idea of affordable medication. This is a scam that the Reds have been using since time immemorial: Present themselves as moderates using the phrase "liberal" or "progressive" (always and everywhere a euphemism for Red) and then initiate a usurpation of the political machinery of the nation. Soetoro was trained in these tricks during his time on the Chicago political scene and regularly uses the tactics of Saul Alinsky. The goal of Obamunism, as with all leftist ideology, is the equality of outcome over the equality of opportunity, which must naturally lead down the road to serfdom.

Under the Obamunist regime, most of the economy has been nationalized and czars have been appointed to rule over various industries. Communist takeovers include:

Besides overtly nationalizing most of the economy, Soetoro has been attempting to collapse the remnants of capitalism in sneakier ways. In concert with Federal Reserve chairman Ben Bernanke, he has been working hard to devalue the dollar to the point where the currency collapses entirely. He has also been encouraging the collapse of the dollar through historically unmatched levels of wasteful spending through programs like the failed stimulus package (or, more accurately, "porkulus"). Because any serious economist knows that government spending never has any effect on the economy whatsoever (unless it's way too much spending), Soetoro's intention was clearly to undermine capitalism due to his hatred of the economic system. Indeed, American debt levels, and taxes, are at the highest of any nation in recorded history ever, causing experts to predict that the next generation will be sold into debt slavery. This is why the smart money is now invested in gold, a precious commodity which only appreciates in value.

Soetoro had no problem wooing the already liberal media. However, under Obamunism, the media has come under the direct control of Soetoro and acts as his personal mouthpiece, mirroring the tactics used in George Orwell's 1984. The only outlets Soetoro allows some truth to slip through on is Fox News and Rush Limbaugh's radio program, and he only does this to fool the public into thinking that the media is not carefully controlled. However, in recent times, he has even refused to appear before Fox cameras, leading some to speculate that the station may soon be shut down for stepping out of line. The rest of the media is under the command of George Soros, who pulls the strings behind the scenes. Soros is also known for his sponsorship of subversive, radical communist activity through organizations such as the ACLU, MoveOn.org, Code Pink, the Tides Foundation, and Center for American Progress. It is speculated that Soetoro allows Fox and Limbaugh to exist because of Soros' FUD campaigns launched against it by his front groups, Media Matters and Daily Kos, which prevents all but the most discerning of citizens from understanding the truth. Party members may be identified by their use of SorosBucks. As Soros is an expert in currency manipulation, he is aiding Soetoro's destruction of the dollar and pays his thugs in the alternate currency of SorosBucks as they won't accept payment in an obviously doomed currency. 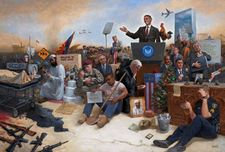 Obamunism is a black supremacist ideology. Soetoro has exploited this aspect of Obamunism to create paramilitary groups out of existing radical organizations. ACORN is the main vehicle by which Soetoro stole the 2008 election and controls both the electoral and legislative processes. ACORN engages in voter fraud and embezzlement of government funds in order to keep the Obamunists in power and to funnel money into their political machine using a Cloward-Piven strategy. The New Black Panther Party is his secondary secret militia, which he uses to suppress white voters and Tea Party members. Census officials are simply paramilitary members in training who also gather valuable information on political dissidents. FEMA concentration camps now dot the landscape of the USSA, which will be used to house white prisoners, Tea Party members, and other dissenters. This will be easy to accomplish as Soetoro has outlawed gun ownership and confiscated all firearms, though some true patriots and brave souls have defied this order. No doubt they are being watched closely by the Soetoro-controlled CIA, FBI, and ATF. Soetoro's deep-seated hatred of white people stems from his desire for revenge for the institution of slavery.

The religious doctrine of Obamunism may best be described as a secular-socialist machine, that is, a brand of atheistic secular Islamofascism. As the Soviets did, Soetoro's ultimate goal is to outlaw Christianity and the Bible. Soetoro, as has been demonstrated, is steeped in the atheist secular Muslim religion and tradition and the teachings of Wallace Fard Muhammad

. This is why he is intent on banning God from the public square, imposing Sharia law on the nation, eats halal soup, and has secretly funded the victory mosque for Osama bin Laden at Ground Zero. Corrupting the religious bedrock upon which the nation was founded has allowed Soetoro to begin the implementation of the homosexual agenda, such as his repeal of DADT.

Soetoro promotes the socialist myth of global warming to further his redistributionist and globalist schemes. He has contracted most of the scientists working in the field of climatology to produce bogus research, much like the Darwinists co-opted the field of biology to push their atheistic, so-called science. This is, of course, all a scam to cede US sovereignty to the United Nations and institute One World Government.

Soetoro's eco-fascist policies are mainly implemented by the secular-socialist svengali John Holdren, his science adviser who promotes an atheistic brand of Social Darwinism and eugenics designed to limit the earth's population and introduce family planning policies like those of Red China. Holdren was an acolyte of Margaret Sanger and is a prime promoter of infant genocide through Planned Parenthood programs. He is, of course, also one of the key advocates of the global warming hoax and was involved in the Climategate cover-up.

This article would not have been possible without the following patriots: