Those who advocate a complete cessation of compulsory work often present their philosophy as a utopian or radical one. For these anti-work advocates, compulsory work should be completely replaced with voluntary play. At least one prominent anti-work philosopher extols laziness as a virtue. Most dedicated philosophical works advocating 'work refusal' appear lazily written and rarely exceed a few pages,[2] because otherwise, that would be too much work! The r/antiwork subreddit, for example, attributes the most 'essential' texts to three very short works by Bob Black, Bertrand Russell, and David Graeber, the longest of which is 10 pages.

Philosophy that contained snippets of work criticism can be traced back to ancient times. The idea of work refusal as a self-conscious movement is arguably visibly today on social media sites like Reddit, especially since media reports of a 'Great Resignation' began. The philosophy of refusing work, in its most literal non-internet sense, has connection to a broad array of demographics, including post-leftists, left-anarchists, sovereign citizens, 1960s counterculture, the Marxist-defined demographic of the 'lumpenproletariat', some self-described incels, and some self-described 'NEETs'

Origins of work criticism can be found in Ancient Greece. Plato once said, "Nature has made no shoemaker nor smith. Such occupations degrade the people who exercise them. Vile mercenaries, nameless wretches, who are by their very condition excluded from political rights. As for the merchants accustomed to lying and deceiving, they will be allowed in the city only as a necessary evil. The citizen who shall have degraded himself by the commerce of the shop shall be prosecuted for this offense. If he is convicted, he shall be condemned to a year in prison; the punishment shall be doubled for each repeated offense."[3] 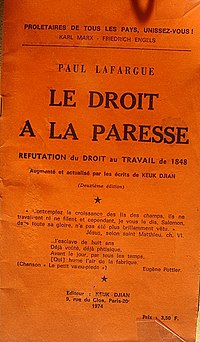 The idea of purposefully limiting work gained some traction when the Industrial Era hit and more people had to work with machinery. Paul Lafargue, a Cuban-French socialist known for being married to Karl Marx's daughter Laura, wrote an 1883 book called The Right To Be Lazy[3] (French: Le Droit à la paresse) that describes his opposition to work and proposition of having a right to be lazy. Bertrand Russell, a pacifist philosopher and mathematician, while not opposing work culture entirely, wrote his book in In Praise of Idleness and Other Essays agreed that if working times are distributed and reduced, there would be more employment and satisfaction.[4]

Principled idlers occupied popular attention in many other forms after the Industrial Era. Author Tom Lutz tracked the history of post-Industrial work refusal sentiment with his book, Doing Nothing: A History of Loafers, Loungers, Slackers, and Bums in America. In it, Lutz notes that work refusers often adopt a humorous, self-denigrating attitude, which acts as a coping mechanism for their often low social status or tenuous living situation.[5]

Lutz states that during World War I, slackers became heros in literature, and work refusal sentiment was common among the poor at the time (but not among the rich). In the history of work refusal, this is the era of sports, flappers, babbits, and bums.[5]:176-214

During the 1960s, work refusers took the form of Beats, non-conformists, playboys, and delinquints.[5]:215-246 During this time work refusers reinvented themselves. This is also the beginning of women arguably making up a fairly large percentage of work refusers.

Bob Black's The Abolition of Work is arguably the most widely published, dedicated singular work refuser text, which also directly informed the modern work refusal movement. This text, unlike Lafargue's treatise, did not advocate abolishing work for the sake of laziness. Bob mainly had an issue with the compulsory nature of modern work and centered his anti-work stance around promoting freedom. He wanted people to build their lives around 'play'.

In his work, Black cites the historical utopian socialist Charles Fourier as a primary inspiration for his work refusal philosophy.[6] However Fourier arguably holds a fundamentally different view of work than Black, arguing that dissatisfaction from work doesn't result from duty, but rather from a repression of (literal and figurative) libidinal desires.[7][8]

The modern work refusal anthropologist/anarchist David Graeber was also an inspiration for Black. Graeber's book called Bullshit Jobs, and shortened essay versions of this book also directly influenced the modern work refusal movement. Graeber makes the argument that US citizens live in post-scarcity, but take up pointless jobs despite this. He argues the pointlessness of a large percentage of modern work in the USA exceeds the pointlessness of make-work which took place in the former Soviet Union. For example, despite technology making work less necessary, Graeber argues that we are filling out more pointless forms than the Soviet Union forced their citizens to fill out, just to fill our day.[9]

A subreddit called 'r/antiwork' started as an anarchist subreddit criticizing work-as-we-know-it, with the ultimate view of abolishing employment. The subreddit used to say in it's banner that it wanted "unemployment for all, not just the rich".

As it got popular, the subreddit slowly moved away from the idea of abolishing work altogether and shifted more to discussions about wage work reform. It eventually gained about 1,700,000 subscribers around 2021.[10] The subreddit loosened to include more liberal ideologies.[11] Despite the rapid growth during the 2020s, something happened on January 2022 that would put a halt on this movement for a while.

On January 25, one of the long-serving moderators, Doreen Ford, went on a Fox News interview with anchorman Jesse Watters. In the interview, Ford described anti-work goals from the perspective of Paul Lafargue, describing laziness as a "virtue", and noting her occupation as a dog-walker. During the interview, Ford also notably called anti-work and/or her subreddit a 'movement'. Instead of arguing vigorously, Watters listened to her claims and laughed at her anti-work ideas. This caused an embarrassment to later members of the community who mistakenly thought the subreddit name was ironic and who also felt they should have had a vote on whether this interview should have happened.

Outside redditors and new subscribers to r/antiwork proceeded to raid and concern troll the subreddit, and stalk and harass Ford. After this, the subreddit went private for a while. After it opened up again, some of the moderators, including Ford, were removed.[12] Some original r/antiwork mods and members attempted to set up shop again on sites outside Reddit. Those who raided the subreddit weren't fully satisfied with the results of their raid either, and attempted to split the subreddit into a separate group called r/WorkReform.[13]

NEET is an acronym for "Not in Education, Employment, or Training". While it originated in the United Kingdom, it is mostly well known in North America and East Asia with the younger generations raising doubts about the work culture in their country.[14]

Alternative terms can include nem-nem in Portuguese (short for nem estudam nem trabalham (neither working nor studying)),[15], ni-ni in Spanish (short for ni estudia ni trabaja), and ニート in Japanese (nīto).

Self-described NEETs and incels have come up with visual or print propaganda making fun of workers as 'wagies' or 'wagecucks'. Sometimes they'll reference an Amazon prototype worker cage found on a patent website, taunting workers to 'get in the cagey wagie'.[16][17]

A freeter (フリーター, furītā) is another term for a Japanese person, in the younger generation again,[18] who refuses full-time employment.

The growth of work refusal in Japan could be attributed to the burst of the economic bubble that Japan faced in the 1990s, in which the term freeter had developed negative perception among regular Japanese people.[19] Nowadays, the job market in Japan is getting more fierce, where young people have a more difficult time finding a stable job and resort to the hikikomori,

freeter and NEET realm, even if they finish university.[20]

See the main article on this topic: Basic income

Proponents of Universal Basic Income have varied views on work culture, with some thinking that unattractive jobs would have to give more pay and benefits to look more appealing than the basic income.[21] David Graeber has suggested that a generous UBI would change the relationship of people to work by allowing them to quit unrewarding jobs (he uses the metaphor of a masochist able to use a safe-word to escape a scene they were no longer enjoying), while ensuring people only worked at fun, productive, or socially-beneficial jobs. This could potentially put whole industries out of business including in the field of health insurance and private medicine ("Medical Care Cost Management companies") that serve only to make both staff and sick people more miserable.[9]

The group hasn't made that much anti-work literature lately, and nowadays mainly focuses on pro-feminism, pro-crime, anti-finance, and geopolitics.

Some parents, religious sects and political ideologues are proudly alarmist about inactivity. For example, the Book of Proverbs,[22] and Benito Mussolini,[23] hold a negative opinion of slack, valorize work, and when they mention a lack of activity, they conflate it with death. Fascism goes further and states that life should be a constant struggle. In this struggle, it states that individuals who self-improve to 'dominate' nature through work are the most worthy of life.[23]

Other pro-work pundits frame their defense of work somewhat differently, and take a less 'winner-take-all' approach to life. For example, some object to framing inactivity as natural, stating that laziness does not actually exist, and that everyone would work if not for bigotry and/or 'improperly treated mental illness'.[24][25] 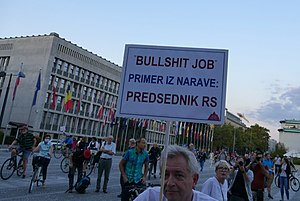 A protester of the bullshit jobs. The sign roughly says "Bullshit job example from nature: President of the Republic of Slovenia"

The COVID-19 pandemic gave an opportunity for people to rethink their careers and decide whether or not work culture has serious flaws.[26] Concerns about alleged systemic labor shortages have been raised by media outlets consistently since 2020.[27]

The media often exaggerates how many people are leaving their jobs however, and it's questionable whether there is any medium-term 'Great Resignation' occurring in the U.S. separate from temporary COVID concerns. For example, according to the St. Louis Federal Reserve, the USA lost a total of less than 1.1% of its workforce since before the 2020 pandemic-associated stock-dip, and the workforce is net gaining workers month-by-month.[28]

It's not clear that the work refusal movement is actually causing any meaningful amount of people to leave their jobs, especially long term. Complaints about a repeated burnout cycle in low-wage jobs is likely a more possible motive.[29]

Over the 2000s, machines have been invented to automate jobs that a human could do, ranging from basic to professional jobs. With this innovation, people are questioning about what a future would look like with automation technology taking over the work force.[30]