A Matter of Faith

A Matter Of Faith is a 2014 creationist propaganda film made by the Christiano Brothers,[1] which is full of evangelical Christian stereotypes and tired arguments concerning evolution, secular society, and higher education. 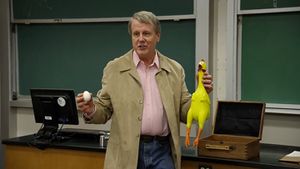 The movie's villain, the seductive and charismatic (no really) Professor Marcus Kaman engaged in the use of a rubber chicken joke to illustrate the reproductive cycle in order to "illustrate evolution".

The main plot involves Rachel, an innocent Christian teen girl, entering the den of iniquity known to most as a "secular university". There, she enters the class of the villainous Professor Marcus Kaman, who is out to indoctrinate his students with a (conveniently strawmanned) version of evolutionary theory.[2] Whilst in his class, Rachel has her faith weakened by the evolutionary curriculum, to the point where when her father opens her Bible when he visits her at college, he finds that the 50 bucks he had inserted into the Bible before she left are still there, and then realizes this must mean she hasn't been reading it the whole time.[note 1] Later, she goes to a party, and is corrupted by the evil secular party culture. 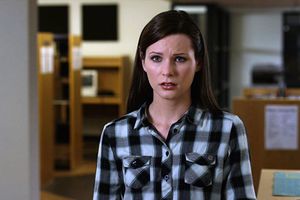 Her father, incensed by this terrible thing happening to his daughter, flies into a mad rage. He googles Kaman and is shocked to discover that he (like basically any other biology professor at a public university) accepts modern evolutionary theory. He pays a visit to his pastor, who informs him that not only is evolution taught in nearly every secular university, but also in many Christian institutions of higher education. The father is alarmed at this, and even more so at creationism not even being mentioned in the university's biology curriculum. He also seems to be unaware that this sort of thing has been going on for more than a century. He pretends to go visit Rachel again, but actually storms off to Kaman's office to confront him on teaching evolution. In fact, he actually complains that Kaman shouldn't teach the university curriculum because it goes against what Rachel's parents have been telling her for her whole life, not to mention his entire religion. All of a sudden Rachel walks in, and Kaman suddenly challenges her father to a debate over the creation vs. evolution "controversy", to take place in a few months. Rachel is apprehensive of the idea, but Kaman points out that her father is passionate with regards to his beliefs, and predicts that will lead to a good debate. Her father, Stephen, agrees, which leaves Rachel visibly upset. Father and daughter spend time arguing over Kaman's beliefs and the tone in which he speaks. Rachel's father then decides that this debate is somehow personal — he has to save his poor daughter from this evil.

Then, a student at the university, who works for a local newspaper, informs Stephen that a former biology professor at the university, Kaman's predecessor Dr. Portland, was fired for refusing to teach evolution in part due to Kaman's machinations. Stephen calls Portland for help on the debate, but is refused in his request.

Soon, the debate starts, with Stephen sounding like Ken Ham, claiming that evolution is a religion and is a direct attack on God.[5] Kaman then points out that the idea of creationism has to be taken on faith due to the slant of the evidence. Stephen attempts to respond, then breaks down, demanding his beliefs be taken on faith. Portland then suddenly shows up and gives an even more Ken Ham-esque speech with PIDOOMAs like "you have to take everything on faith" and therefore creationism and evolution are mutually valid. He then says the cause of people accepting evolutionary theory is because they just want to sin, which, as a Patheos review points out, may have had something to do with him being fired.[6] Rachel's doubts about the One True Faith are then completely assuaged.

See the main article on this topic: Tokenism 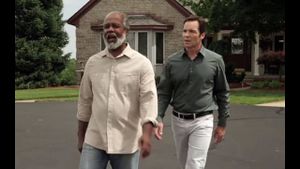 Man, I, don't be knowing much, but how do you know that if you believes in the evolution you going go to hell. Is anyone reminded of Uncle Ben

Given this film's background in conservative Christianity, it should not be surprising that this film positively reeks of tokenism, and bullshit. For instance, Dr. Portland, with his wise[note 2] speech discussing the validity of faith, his emergence from obscurity in retirement, and his saving the reputation and/or souls of the two main white protagonists in the play, is a near-perfect example of the "Magical Negro" trope.[7]

In another weird case of tokenism, Rachel's mother is played by Iraqi-born Sarab Kamoo, who is evidently just placed there to be a brown person to diversify the cast (Portland likely has a similar role). Rachel is quite clearly very white, so having a Middle Eastern person cast as her mother would normally make no sense.[note 3]

It is therefore clear that in this movie, minorities exist only as props, out there for the sake of not looking like a white Southern town in the Jim Crow era, which the makers are doubtless nostalgic for.

The movie received a 32% viewer score on Rotten Tomatoes.[8]

It currently has one star on Common Sense Media.[9]

Ken Ham, Ray Comfort and the American Family Association's Tim Wildmon praised the movie, with Answers in Genesis encouraging its followers to show it to their community and spread the word about it to unsuspecting dupes.[10]