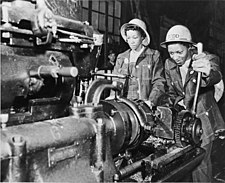 Feminism refers to any ideology that seeks equality in rights for women, usually through improving their status. Feminism is rooted in ending men's historical power over women. Recrudescences in feminist theory particularly focus on issues that disproportionately hurt females, such as ending gender pay gaps, enacting female voting and political rights, and reassessing what is considered "female" and "male".

While modern feminist thought is largely rooted in the Western intellectual tradition, the ideology is gaining currency throughout the whole world. In many cases, the feminist goal of equality for women has helped push movements around the world to change the entire way private society is viewed, and in some cases even helped topple authoritarian governments.[2] One of the greatest vindications of feminism is the power women in Liberia showed when, with some assistance from the international community, they ended the civil war

and subsequently replaced the chaotic, unabashedly corrupt, and genocidal dictatorship with a reasonably functional democracy.

Feminism can be studied from the perspectives of the actual movements for equality or from the writings of both observer, commentator and participant addressing the underlying issues of why women have not been and are not seen as equal.

Women's roles in society have long been debated. Plato's Republic suggests that in a true utopia women would be educated and would work beside men equally. Jesus, especially in extra biblical writings, appears to demand that women be allowed to study with him beside the men.

However, most of this discussion was carried out by men. Feminism has the distinction of being a movement "of, by, and for women," though somewhat ironically, the term was coined by French philosopher Charles Fourier.

In the United States and Great Britain, feminism began with the demand for legal autonomy, such as the right to be seen as more than a man's wife or daughter, the right to hold property, or the right to have one's choice of husband. Later, women demanded to be allowed access to political systems, e.g. by being given the vote. Once women saw what that agency brought, they began to demand further measures of equality. Finally, once these measures of equality had been accepted (in theory, at least), some feminists broadened the scope of their challenges to systems on a civilizational scale.

The history of feminism is conventionally divided into three waves, each echoing a broader political movement of its era: the first wave reflecting the rise of liberalism, progressivism, and (towards the end) communism; the second, the Civil Rights Movement and the New Left; the third, identity politics in general.

Suffragette meeting in Paris, 1914.
At the beginning of the 19th century in the UK and US, the agency of women was restricted on two different fronts: legal autonomy and the right to vote. In most countries women were considered property of their fathers or husbands. They were generally unable to enter into contracts or own land, and were legally seen in much the same way children are today.

Also, at the time, voting was largely by household, with only householders able to cast a vote. Hence, although there were comparatively few direct prohibitions on women voting, the restrictions on women owning property kept most of them disenfranchised. Later in the 19th century, when property qualifications for voting were eliminated, women became explicitly excluded from the franchise.

Hence, the feminists of the first wave set out to extend to women the assertion of Thomas Rainsborough during the Putney Debates: "I think it's clear, that every man that is to live under a government ought first by his own consent to put himself under that government."[4]

First-wave feminists often joined other social movements, including abolitionism, the temperance movement (the Woman's Christian Temperance Union, for example, was headed for many years by a feminist, Frances Willard), the labor movement, and the anti-war movement in regards to World War I.

"And I can put THIS up your ass if you get in my way."

During the two world wars, with so many men leaving nations' workforces to fight, the demands of total war

required putting women into jobs previously reserved for men.[7][8] Women quickly proved themselves more than capable of doing virtually all "men's work"; but when the wars ended, someone or something pressured women to leave their new jobs to make room for the returning veterans.[9]

However, many women had found that they greatly preferred employment to the traditional female role of rattling pots and pans, changing diapers, and having to beg their husbands for pin-money; thus was born what became called the "feminist movement", or second-wave feminism.

While first-wave feminism had focused on removing the most overt legal disabilities for women and making women equal to men before the law, second-wave feminism tackled a wider range of social restrictions, advocating for women's full and equal participation in the larger social world.

Like the first-wave feminists before them, second-wave feminists participated extensively in contemporary political movements, most notably in the anti-war movement of the 1960s. 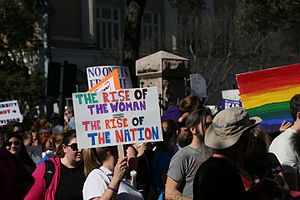 To wit: third-wave feminism is intellectually informed by postmodernism and post-structuralism, both of which challenge feminism to re-evaluate (and sometimes redefine) societal concepts including the notion of gender itself. They de-emphasize attacking women's second-class status directly in favor of attacking systems of religion, government, education, media, and even the family, all of which they believe are partly responsible for reinforcing women's second-class status.

Third-wave feminism challenges not only the status quo of women's roles within these systems, but the systems themselves, making it largely overlap with and feed into the social justice movement.[12][13] This sometimes makes people who fully support the goals of second-wave feminism uncomfortable with the third-wave variety. Sex-negative feminism has also diminished in prominence within third-wave feminism, while there is a much stronger sex-positive element, as seen through works like The Vagina Monologues. However, accusations of "sex-negative feminism" are routinely used as a snarl word to dismiss points of view which are not necessarily sex-negative, such as criticism of the porn industry, of the objectification of women in the media and popular culture.

In many ways third-wave feminism, a far more intellectual and academic form of feminism, is less relevant to the average woman on the street than its predecessors — far more women are receptive to the idea of getting an honest day's pay for an honest day's work than are receptive to the idea of overthrowing capitalism or other huge systems designated as tools of patriarchy — but in other ways it is actually more relevant to many women. In its specifics, it contains numerous legacies of the struggles that gave it birth: third-wave feminists explicitly attempt to treat women's issues as larger than those of upper-class white women, highlighting the similar but distinct experiences of minorities in the First World, as well as women in other countries where different traditional roles have led to different kinds of discrimination that Western-style feminism may not adequately tackle. For example, female genital mutilation, a hot-button issue in Western feminism, is seen as a less pressing issue by a number of African feminists, especially considering the history of colonial opposition to the practice (seriously).

Feminism is ultimately about women's empowerment, and their right to make the choices that work for them, even when those choices may seem to conflict with basic ideals of equality. Thus, at least one modern feminist source has argued that Sarah Palin and Michele Bachmann are feminists, although the pair rail against things most sane people feminists hold dear, particularly the right to have an abortion.[14]

Second-wavers are very grateful to third-wavers for having provided feminism with a framework for thinking about intersectionality. The term was coined in 1989 by black third-wave feminist Kimberlé Williams Crenshaw.[15]

Feminism, just like any other philosophy, has its vocal fanatics too.[16]

As with most movements against discrimination and inequality, feminism is still a long way from achieving its goals, with many prejudices and much bias persisting. Women still get paid less than men, mostly because of society's expectations of women pushing them into less lucrative jobs, and of course direct discrimination.[18]

But, on the bright side, the situation of women in general has been consistently improving, at least in the First World. The proportion of wealth held by women has risen significantly enough to prompt speculation as to the effect that the continuation of this trend would have on the economy,[19] and although large wage gaps remain in specific professions, in the general case the income gap is now almost nonexistent among the younger generation of women, especially in urban areas. These developments led Hanna Rosin of The Atlantic to remark: "Yes, the U.S. still has a wage gap, one that can be convincingly explained — at least in part — by discrimination. Yes, women still do most of the child care. And yes, the upper reaches of society are still dominated by men. But given the power of the forces pushing at the economy, this setup feels like the last gasp of a dying age rather than the permanent establishment."[20][21] That may be overly optimistic, but if feminist (and labor and small-d democratic) momentum keeps building, it doesn't have to be.

Domestic violence has decreased dramatically in the United States since the launching of second-wave feminism. The problem was rampant in the 1960s and 1970s. It still happens plenty, but it's rare by comparison to earlier periods, yet another example of the success of the feminist movement. Though the problem continues, rates of incest have declined significantly as well; you can thank feminism for that too.

Since its inception, the feminist movement has faced significant backlash, from varying opponents and with varying reasons. Gamers and "rational skeptic" edgelords oppose the third wave, nutty boomers oppose the second wave, and the most misogynistic even oppose the first wave.