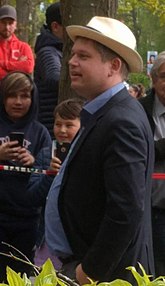 Stram Kurs (Hard Line) is a Danish and Swedish far-right party. It was formed in Denmark in 2017 by Rasmus Paludan, with the stated purpose of removing Islam and its practitioners from the country.[1][2] It was also registered in Sweden in 2022 for the upcoming election.[3]

in 2015, Denmark placed border guards at German and Swedish crossing points, in the anticipation that Denmark might become overrun with asylum seekers wanting to immigrate. That turned out not to be the case, and the waste of police resources was criticized.[4]

Nevertheless, this period marked a sea change in Scandinavians' previously welcoming attitude towards asylum-seekers.[5] Some Danes became pessimistic that their nation might face integration problems akin to those which media claimed existed across the Ørefrsund in Malmö, Sweden.[6] Less charitably and more bluntly, this could be called Islamophobia. (In Norway, such anxiety is often couched as fear of svenske tilstander, "Swedish conditions.")[7] Many of the perceived difficulties of integration in Sweden, however, were greatly exaggerated by local media figures, and especially by fringe figures such as Ingrid Carlqvist.

While the reasons were questionable, the right-leaning Danish coalition government of the time became staunchly opposed to immigration, and alongside the use of police at the border, implemented a plan to convert an uninhabited island into a concentration camp housing camp for disqualified asylum seekers that would, in essence, demoralize them to the point where they would want to leave the country of their own accord.[8] The government, who depended on the Danish People's Party for the balance of power, also committed itself to legislating a ban on wearing burkas in public in 2017.[9]

While some less extremist governments have made such as case from the perspective of secularism, such as France, and some feminist thinkers have been outspoken against burqas, this was largely seen as an unwarranted attack on a religious minority.

Stram Kurs thus capitalized on a general rightward swing and marginal but growing populism and nationalism in Europe generally and in Denmark in particular, fed by scare stories from media outlets. Paludan used increased anti-Muslim rhetoric in the wake of the 2015 Charlie Hebdo attacks and subsequent 2015 Copenhagen shootings

, and waxing xenophobia in its allied countries (e.g. Trump, Farage). Paludan was a fringe figure who came to prominence through YouTube videos where he coarsely insults Islam, Muslims, and the Qur'an, and was previously a lawyer whose career largely involved defending people on drug charges. While he pitched his position as a clash of ideals between Islam and nominally Lutheran but largely secular[10] ethnic Danes, Breivik, to the north, made similar claims about Norway.

From shitposting to political party[edit]

Stram Kurs, which is even more reactionary than the Danish People's Party, received the necessary minimum number of signatures to be certified as a party (20,109),[11] and ran candidates in the June 2019 elections to the Folketing (Parliament).[2] One of the signatories said in an interview that he didn't agree with Hard Line's agenda so much as he was impressed by Paludan "having a backbone."[12]

While Hard Line is generally viewed as a single-issue protest party, the multi-party system in Denmark means coalition governments are inevitable, and parties jockey constantly to poach from each other's voting base, often by stealing key platform issues. Shortly before the June 2019 election, the leader of the largest left-leaning party, the Social Democrats' Mette Frederiksen,

after she rather abruptly combined anti-immigration measures with the party's usual center-left economic program and social liberalism.[13] This both led to an exodus of People's Party supporters, and could have been viewed as a victory for Hard Line's agenda.

Contrary to the hopes/fears based on early opinion polls, Stram Kurs failed to cross the 2% electoral threshold in the Danish general election on June 5th, 2019, garnering only 1.8% of the ballots cast.[14] By contrast, the other party challenging the Danish People's Party for the mantle of “most right wing party in the Danish parliament”, New Right, did slightly better at 2.4% of the vote, while the DPP itself collapsed from its 21.1% high watermark in 2015 to no more than 8.7%. However, despite not passing the electoral threshold, Stram Kurs can still look forward to an annual sum of about 2 million DKK (around $300,000 USD or €270,000) in grants from the state, due to the Danish system of public financing of political parties based on their performance in the most recent general election.[15]

A second try in a second country[edit]

In 2022, after his Danish ambitions had waxed and waned, at least for the time being, Paludan decided to enter the upcoming 2022 Swedish election with Stram Kurs Sweden.[3] Perhaps no longer getting the attention he wished for in Denmark, Paludan quickly became known to Swedes after sparking riots in a series of Swedish cities,

by provoking Muslim immigrants with the announcement of Qur'an burnings. In Sweden, Paludan and his party are new names in politics, and will also face the obstacle of a 4% of the vote barrier for getting into parliament, twice that of Denmark's 2%.