Peter Imanuelsen (born September 27, 1994), better known as Peter Sweden, is a far-right speaker and activist. Imanuelsen was originally a Holocaust denier[2] white nationalist, extreme-homophobe, Islamophobe and conspiracy theorist crank who has written that Jews and the Vatican are behind a New World Order. In 2017, Imanuelsen was doxed by the anti-racist organisation Hope not Hate after a news article about his Holocaust denial was published; this happened after Katie Hopkins tweeted a photo of her next to him, which prompted journalists to find out who he was. In response, Imanuelsen has claimed he has since changed his views and apologised for denying the Holocaust. No longer publicly attacking Jews, Imanuelsen is now a prominent Islamophobe who says he opposes Islamic immigration into Europe, as well as an anti-vaxxer.[3] He is also not actually Swedish (it's a long story).

Imanuelsen was pro-Hitler prior to his doxxing by Hope not Hate. writing: "Hitler had some good points"[5] and denies the Holocaust:[5][6][7]

The claim that 6 million jews were gassed seem highly unprobable. The concentration camps didnt have the facilities for that.

I believe the holocaust is a lie to further the agenda of NWO.

And you also have the problem that it is mathematically impossible to kill 6m Jews with the equipment they [Nazis] had.

Imanuelsen also had some fascinating opinions on related subjects:

I dont like fascism, but i think hitler had some good points. I am pretty certain that the holocaust actually never happened.

How is the protocols of the elders of zion "anti-semitic" ? Is the jews own text on jewish supremacism anti-semitic?

The globalists (mainly Jews) are the ones bringing in the Muslims to europe. They seem to work together.

It is the Vatican & the Jews who are behind NWO.

These tweets were quoted by the Huffington Post in July 2017 in a published article on Imanuelsen, revealing his Holocaust denial and links to alt-right figures. Imanuelsen published a response to the article the same month and has said he no longer denies the Holocaust and says he regrets the above tweets, blaming them on his "youth". However, Imanuelsen posted these tweets when he was 21, an adult; these tweets were also posted less than 10 months before. It seems rather suspicious that Imanuelsen changed his views in such a short space of time after the article about him appeared, and he might not be sincere about denouncing Holocaust denial; Hope not Hate doxed his real name as Peter Imanuelsen soon after the article appeared.[8]

At some time in-between September and December 2017, the nasty tweets were deleted, and Imanuelsen's profile was changed to include the statement, "I despise Nazis & Communists."[9][10] However, many of Imanuelsen followers on Twitter are Neo-Nazis, while he still associates himself with the alt-right.

Imanuelsen supported the 2016 Orlando nightclub shooting because the victims were homosexuals and has also described homosexuality as a "disgusting sin" and wants it banned.[11]

He has made quite sexist comments:

Swedish boys got a school lesson where they were to describe what they wanted from girls.

They answered the following.

Looks like there is hope for Gen Z in Sweden too.[12]

A story of masculinity, in 5 parts:


As a libertarian, Imanuelsen wants to nationalize the free marketplace of ideas to prevent "Marxist policies":


Unsurprisingly, he also thinks that Nazism and Communism are quite similar.[23] A story of voluntary patriotism, in 2 parts: 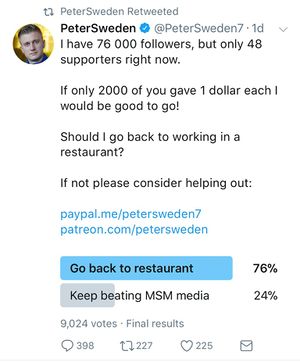 Inexplicably, Imanuelsen likes to pretend to be Swedish despite being a British national born in Norway who's lived over half his life in the North Yorkshire.

According to the anti-extremism research group Hope not Hate,[26] Imanuelsen's family likely moved to the UK as part of a tax evasion scheme and that he owes £700,000 in tax debt to the Swedish government. He did live in Sweden from 1996 to 1999 and again from 2002 to 2004. So in total, he's only lived five years of his entire life in the country he's named himself after and, by his own admission, doesn't even live there currently (he claims to live in Norway, which is dubious at best).

When called out or questioned about this discrepancy, Imanuelsen claims that his family fled from Sweden to the UK due to political persecution. On other occasions, he's claimed that he only lived in the UK for a few months or to have moved there from Sweden in 2014. These are both untrue.[27]