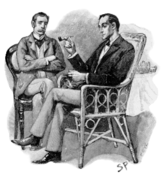 John H. Watson and Sherlock Holmes from an 1893 illustration of The Greek Interpreter

The fallacy is an appeal to omniscience and an informal fallacy.

The Holmes Method is illustrated by the quote from "The Adventure of the Blanched Soldier",[note 1] a 1926 Sherlock Holmes short story:

"When you have eliminated all which is impossible, then whatever remains, however improbable, must be the truth." —Sherlock Holmes

To apply this method, one must find explanations and eliminate them one by one. However, to draw a logical conclusion from this is fallacious, because both steps require omniscience:

As should be obvious, this is incredibly difficult, requires all knowledge of the situation, and may lead one to ridiculously improbable explanations.

In essence, a major flaw in this line of reasoning is that there may be explanations that you simply have not thought of.

It is typically offered by ghost enthusiasts as an example of why one must not discount belief in the spirit world.[1][2][3] Star Trek's Spock even uttered a version of it in Star Trek VI — The Undiscovered Country.[4] It's no surprise that paranormal claims of all kinds have adopted this fallacy. For example, crop circles:

Look at that mutilated cow in the field, and see that flattened grass. Since the farmer is away and couldn't have done the deed, aliens must have landed in a flying saucer and savaged the cow to learn more about the beings on our planet.

Naturally, these are not the only explanations. Angry neighbors, rival farmers, pranksters, predators (not the Schwarzenegger movie kind), undetonated ordnance from a past war (if applicable), and many other perfectly mundane probabilities exist that must be eliminated. Even assuming they are, there are myriads of other supernatural or paranormal phenomena that could potentially explain the death of the cow and the flattening of the grass that would similarly need to be falsified before the conclusion of "UFOs" or "aliens" can be accepted under this logic (For example, perhaps it was attacked by an avian cryptid. Perhaps it was struck down by [Insert Deity Here]. Perhaps it was possessed by ghosts or demons, causing the cow to burst as they departed its body. Perhaps it is evidence of an airborne biological weapons test by Monsanto, designed to kill all cattle and force America to eat GMO-fed meat. And so on. Ad infinitum.).

According to Aristotle in De Anima, the philosopher Thales of Miletus once said (paraphrased):

The lodestone has a soul because it moves iron. This proves that all things are full of gods.[5]

Thales failed to falsify all alternate explanations because he didn't know that magnetism existed. Similarly, we may be disproven by future discoveries.

Lord Kelvin is almost infamous for these. Because he had no knowledge of nuclear fusion, isotopic decay, or nuclear fission, there was in his mind no way to reconcile the evidence that had been found by biologists and geologists that the Earth is at least hundreds of millions of years old with the seeming impossibility of the Sun shining almost as bright as it does today for that period. As such, he believed the Sun was at most a few million years old and that either the biologists and geologists were wrong or the Earth far predated the Sun.

Most often, the Holmes method leads people to explanations that are easy to find but difficult or impossible to falsify, such as a god of the gaps or other supernatural entities with unknown properties. Often, people ignore the flaws in their preferred explanations.

Arthur Conan Doyle, who wrote the Sherlock Holmes stories, himself ended up believing in spiritualism and fairies by "using" the Holmes method.

It is possible to grant provisional (scientific, not logical) assent to an explanation if it explains something better (or more simply) than all known alternatives. This isn't an absolute truth, merely the most probable one.

An alternate formulation, that is closer to what Holmes actually practiced, rather than preached, is that "when you have eliminated the common possibilities, one of what remains must be truth, no matter how improbable what remains may be".

Dirk Gently, in Douglas Adams' The Long Dark Tea-Time of the Soul, rejects the Holmes principle on the basis that "the impossible often has a kind of integrity to it which the merely improbable lacks." Often, impossible ideas merely suppose that there is something we don't know about, "and God knows there are enough of those". This ties in to the omniscience idea, that you should not assume that all possible explanations have been accounted for just because you personally can't think of any others.[6]