From RationalWiki
(Redirected from British Union of Fascists)
Jump to: navigation, search

Sir Oswald Ernald Mosley, 6th Baronet of Ancoats in the county of Lancashire (1896-1980) was a British aristocrat who fought in World War I and then got himself involved in politics, first for the Conservatives, then for Labour and finally as the leader of various groups of thugs, most notably the British Union of Fascists. The Beeb has declared him the the Worst Briton of the 20th century.[1]

So, he was an aristocrat, descendent of prosperous Anglo-Irish landowners, also having relatives in the British Royal Family.

During World War I, he fought on Ypres (the second battle) and Loos (the only battle).

He married Lady Cynthia Curzon in 1920. She was herself an aristocrat, a daughter of George Curzon who was Viceroy of India and well connected with Tory leaders. He had an idealistic desire to end all wars.

So, in 1918, he was elected for the Conservatives. He was the youngest MP to take his seat, the youngest of them all being abstentionist Sinn Feiner Joseph Sweeney.

From the Conservatives to Labour[edit]

In 1919, a conflict started in Ireland: the Irish War of Independence. Winston Churchill, then Secretary of State for War, had an excellent idea: using the Black and Tans, a brutish bunch of thugs who were part of the Royal Irish Constabulary and who terrorized the Irish population (BTW, the Irish still hate these Black and Tans after all these years[2]).

In 1924, he joined Labour. He lost the elections that same year, where he ran in another seat, to Neville Chamberlain, returning to parliament in 1926 occupying yet another seat. Meanwhile, he drafted with John Strachey an economic program known as the "Birmingham Proposals," criticizing both classical liberalism and Labourite socialism, in which they proposed an expansion in production through an increase in demand, which would be met by rises in real wage levels, issues of consumer credits to the unemployed and producers' credits to manufacturers, and nationalization of banking.[3]

Being close to Ramsay MacDonald, he made a bid to advance politically. When Labour became the government after the 1929 General Election, Mosley wanted one of the Great Offices of State (Prime Minister, Chancellor of the Exchequer, Home Secretary, or Foreign Secretary). Poor Oswald only could get the office of Chancellor of the Duchy of Lancaster, a Minister without Portfolio outside the cabinet, and he was to draw up a program to combat unemployment.

Out of this came the "Mosley Memorandum," which proposed protectionist high tariffs to protect Britain from international finance, state nationalisation of main industries, and a programme of public works to solve unemployment. It was turned down by the cabinet, after which he resigned from Chancellor, because they were too linked to classical economical thought, and by the Labour Party Conference, after which he got out of Labour.

R. H. S. Crossman, himself a Labourite who did enter the cabinet a couple years later, would later say of the Memorandum as "brilliant" and a "whole generation ahead of Labour thinking."[4] (As evidence of the sometimes strange nature of politics, Crossman was a Zionist and later fought the Nazis in World War II.) 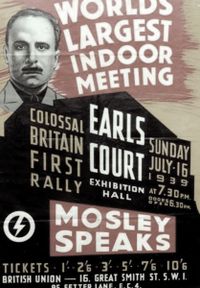 The flag of the British Union of Fascists. Doesn't look like the Nazi flag at all, no siree.

The original flag of the British Union of Fascists, back when the Union was more Italian fascist than German Nazi.

Bitter about this turndown, he founded The New Party, whose policies were built around the Mosley Memorandum and was supported by dissident Labour and Conservative politicians such as Aneurin Bevan and Harold Macmillan, and the Daily Mail. The New Party's meetings where often disrupted by Labour Party activists who viewed him as a 'traitor' for his departure from the Labour Party and subsequent attacks on its leadership. It was this disruption that spurred him to found a party militia, the 'Biff Boys', headed by Peter Howard, the captian of the England Rugby team and Ted 'Kid' Lewis, the Jewish Boxing Champion. At 1931 General Election the party did poorly, with many candidates losing their deposit. [5]

He then went on a study tour around European fascist movements such as Italy's Fascist Party and Germany's Nazi Party, where he became convinced that Mussolini's way was the way forward for Britain. As he moved the New Party further towards authoritarianism it lost many of its supporters, in 1932, determined to unite the existing British fascist movements, he folded it into British Union of Fascists (BUF), which was was protectionist, strongly anti-communist, anti-capitalist, ultranationalistic (practicing an extreme form of British nationalism) and authoritarian-totalitarian. The group's anthem, "Comrades, the Voices of the Dead Battalions", consisted of modified English lyrics from "Horst-Wessel-Lied" (Horst-Wessel Song), the anthem of the Nazi Party of Germany. The group's ideology of what they called British Fascism was largely a mixture of Italian Fascism and German Nazism with local elements added in complete with a paramilitary wing called the Stewards/Blackshirts (the BUF's answer to their spiritual predecessor Italian Blackshirts and the German Nazi Brownshirts/Sturmabteilung) and a flag based off the Nazi Germany template with a reverse color scheme derived from their country's flag using United Kingdom colors like how the Nazis used German Empire colors which was a red background that had the party symbol the Flash and Circle (a white lightning bolt and outline with a blue circle) comparable what the Fasces was to the Italian Fascist Party and the Swastika/Hakenkreuz to the German Nazi Party

At first it did relatively well, it gained the support of the Daily Mail, with its infamous "Hurrah for the Blackshirts!" headline, and the Daily Mirror, as well as 50,000 members at its height. However, the party was involved in violent confrontations with Brirish Communists and Jews and, after their infamous Olympia rally and the Nazi Night of Long Knives, resulted in the loss of BUF support. 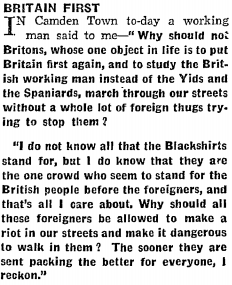 Example of British Union of Fascists' anti-Semitic rhetoric a la Nazi Party (from their newspaper The Blackshirt).

Mosley continued to organise marches which worried the government to the point of them passing the Public Order Act 1936[note 1] which, amongst other things, banned political uniforms and quasi-military style organisations and came into effect on 1 January 1937.

As WWII approached, he began an anti-war campaign on the theme of "Mind Britain's Business," which was at first popular enough to regain back support to his BUF. After the invasion of Norway and the start of The Blitz, however, the campaign became highly unpopular to the point of Mosley being wounded in an assault related to his antiwar activities.

In 1940, the BUF was proscibed and Mosley, his now wife Diana and other prominent British fascists were interned under Defence Regulation 18B.

In 1943, with his political reputation discredited, he was freed from internment. At this time, his public reputation was at a nadir. The Home Office found considerable public hostility to his release, and summed up working-class sentiment as "Mosley is a traitor and a symbol of fascism".[6] Publishers refused to publish him, newsagents such as WH Smiths refused to stock his newspapers, and he was banned from the BBC until 1968.[6] In the aftermath of the war, the fascist movement was unsurprisingly decimated, with all of its leaders except Mosley and Raven Thomson quitting and turning to Roman Catholicism or other pursuits; nonetheless press and police reports indicate that Mosley was received ecstatically by the small cadre of his supporters that remained loyal.[6]

Despite widespread boycotts, after 1945 he was able to publish books via book clubs, and had spent the war refining his ideas by reading ancient Greek philosophy, Spengler's Decline of the West, Goethe's Faust, and modern psychology; his thought integrated socialist ideas about a planned economy and syndicalism with Nietzschean ideas about human potential, and the racism remained. He turned his attention away from the British Empire towards Europe. His political aims were focused in his idea of "Europe a Nation" (a pan-European fascist superstate), and opposition to non-white immigration, in contrast to the pre-World War II British Union of Fascists which was "Britain First" and Britain in general, and viewed Jews as the chief enemy.[6] To this end he founded the National Party of Europe (NPE). This was in contrast to the pro-Empire sentiment of many on the far right, such as the League of Empire Loyalists founded in 1954.

In 1947, the Union Movement was formed out of right-wing book clubs and existing political organisations including the British League of Ex-Servicemen and Women

, but it never attracted anything like the attention of his pre-war activities. It was ignored by the media (aside from a few fights with the anti-fascist 43 Group) and largely restricted to London. The Union Movement and its newspaper Union were one of the first organisations to campaign against black immigration, Union inveighing against "work-shy" immigrants. It picked up on growing anti-immigrant feeling in the late 1950s. The Movement was falsely accused of starting the 1958 Notting Hill race riots

.[6] It seemed to shy away from direct violence, but defended gangs of "teddy boys" accused of racial attacks in London, as it sought to capitalise on anti-black feeling and racial tension. To build on this, Mosley stood for election in 1959 in nearby North Kensington, getting 8.5% of the vote.[7]

He moved to Ireland for a time in the 1950s, in 1951 taking over Clonfert Palace in Co Galway, and in 1955 moving to Fermoy, Co. Cork; at the same time he travelled extensively in Europe and to South Africa.[7] In 1961, he participated in a immigration debate at the University College London, with a young David Irving as a supporter. He published his autobiography My Life in 1968, which attracted more interest from a media which had long ignored him. He died from Parkinson's Disease in 1980 while living in France.

Mosley was a key pioneer in the emergence of Holocaust denial. While not denying the existence of concentration camps, he claimed that they were a necessity to hold a "considerable disaffected population", where problems were caused by lack of supplies due to "incessant bombing" by the Allies with bodies burned in gas chambers due to typhus outbreaks, rather than being created by the Nazis to exterminate people, and sought to discredit pictures taken from places like Buchenwald and Belsen. He also claimed that the Holocaust was to be blamed on the Jews, and that Hitler knew nothing of it. He criticised the Nuremberg trials as "a zoo and a peep show".[8]

Oswald Mosley's son, Max Mosley (1940-2021), was a former Formula One driver and past head of Formula One's governing body, the Fédération Internationale de l'Automobile, and a one-time Conservative Party parliamentary candidate and later Labour Party donor.[9] In 2008, the British News of the World tabloid released video footage of the 68 year-old Mosley engaging in masochistic role-playing with 5 women dressed in military uniforms. Mosley denied there were any Nazi connotations in the act, and successfully sued News of the World for £60,000 for infringing his privacy.[10] Mosley then sued Google over screen-captures of the video appearing in searches, which he won in France and Germany. Finally, Mosley brought a case against News of the World in the European Court of Human Rights, seeking to establish a requirement for the press to contact people before publishing stories about them, but the NotW successfully argued this would have a chilling effect on journalism.[11] Mosley became a campaigner for greater regulation of the press at the Leveson Inquiry and after, supporting independent press regulator Impress.[12] Latterly, he was attacked by the press when it was discovered he had published a racist leaflet for his father in 1961 when he was 21.[9]