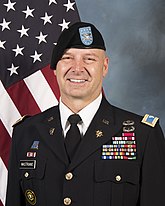 Douglas V. Mastriano (1964–) is a state senator for Pennsylvania's 33rd district, a military historian and spreader of conspiracy theories and Islamophobia.

Mastriano had a 31-year military career, serving in Operation Desert Storm, Operation Iraqi Freedom and the Afghanistan War. He has written two well-received books about World War I and a number of technical analyses of the latter-day Soviet Union.[1][2][3][4][5]

Like Donald Trump, whom he deeply admires, Mastriano has left behind a trail of social media posts suggesting that he's a liar, a fool and/or an ethically-bereft person. He has propagated or created unfounded accusations toward Ilhan Omar, propagated the short-lived conspiracy that Muslims were involved in the Notre Dame Cathedral fire[6] and spread the madness of Jack Posobiec.[7]

This politicians-related article is a stub.
You can help RationalWiki by expanding it.
Retrieved from "https://rationalwiki.org/w/index.php?title=Douglas_Mastriano&oldid=2420797"
Categories:
Hidden categories: