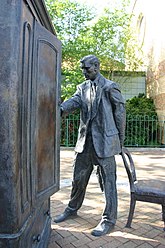 Clive Staples Lewis (1898–1963), usually known as C. S. Lewis ("Jack" to his friends), was an Irish-born British writer, scholar of English medieval and renaissance literature, and Christian apologist. He was a fellow of University of Oxford from 1925 to 1954, the first Professor of Medieval and Renaissance Literature at University of Cambridge from 1954 until his death.

A chapter analyzing Lewis' apologetic arguments appears in S.T. Joshi's book God's Defenders: What They Believe and Why they are Wrong.[3]

The BioLogos institute (a think tank promoting the compatibility of evolution and Christianity) frequently cites C.S. Lewis with approval in its literature. However, the Discovery Institute (which promotes intelligent design) also houses a Lewis Institute, and one Discovery Institute member, John West,[4] has edited a book[5] and given several lectures contesting the view that Lewis was comfortable with evolution, in spite of very clear statements to this effect in Mere Christianity. (In fact, Lewis was indeed comfortable with evolution when he wrote Mere Christianity in the early 1940s, but was later convinced to go full-creationist when a colleague used the old "evolution is random therefore it can't produce the human eye" fallacy on him.)[citation needed]